No American state or Canadian province is as heavily unionized as Quebec, which works out well for the 40 per cent of workers who belong to unions.

But for the rest, things aren’t so rosy. Quebec also has one of the highest unemployment rates in North America and one of the slowest growth rates, and the link might well be more than coincidental.

The unionization rate for all Canadian provinces is 31.8 per cent, and for all U.S. states, just 13.8 per cent.

Quebec labour legislation is quite favourable to unions. For example, Quebec is one of five Canadian provinces where a union that signs up more than half a company’s employees can be accredited without a secret ballot. Quebec employers have no right to challenge a union’s representativeness – not the case in most other provinces or in the United States.

Quebec and British Columbia are the only provinces where the law forbids employers to replace legally striking or lockedout workers. This type of prohibition doesn’t exist in any U.S. state. As well, union members in Quebec, as in all other provinces apart from Alberta and B.C., can protest at sites other than those directly affected by a strike.

In Quebec, as in the other Canadian provinces, a collective agreement can impose unionization on all members of a bargaining unit (closed-shop provision) who, in any case, are obliged to pay union dues (Rand formula).

What economic effects result from a greater union presence? Studies generally confirm that unionized workers obtain higher wages than non-unionized workers. For Canada, this gap is estimated at 15 per cent on average. The higher wages are accompanied, however, by unfavourable effects on employment. With labour costing more, companies have an incentive to use it less and will replace it as much as possible with capital (machinery and equipment).

For example, job growth between 1980 and 1985 was lower in unionized companies than in non-unionized companies. The gap was 3.9 per cent, even after taking account of factors linked to industry and to the firm’s size and age. Unions in Australia appear to slow job growth by 2.5 percentage points per year.

It is therefore not surprising that despite recent progress, Quebec’s unemployment rate is still relatively high, the highest of all the jurisdictions studied, excluding the Atlantic provinces. The average period of unemployment is also the longest.

Other studies show that a high unionization rate can produce a reduction of incentives to invest in physical capital and in research and development. To the extent that companies fear unions will capture future profits generated by investment, in particular through strike threats, they have less incentive to invest.

In a dynamic perspective, a strong union presence ends up having negative effects not only on employment but also potentially on economic growth. Over the last 20 years, GDP growth in Quebec has averaged only 3 per cent a year compared with 3.9 per cent for Canada as a whole. Quebec’s unemployment rate remains among the highest in North America. The high unionization rate is probably not the only factor responsible for this performance, but there is certainly a connection.

Any labour market rigidity can have negative effects on employment. To the extent that unions have privileges and use them either to set wages higher than would be the case without them, or to impose constraints that threaten the profitability and viability of businesses, they diminish employment and general prosperity.

In contrast, more flexible labour relations create an environment better suited to greater economic dynamism. Workers benefit by finding jobs more readily and also by receiving good wages based on their qualifications and productivity rather than on union membership. 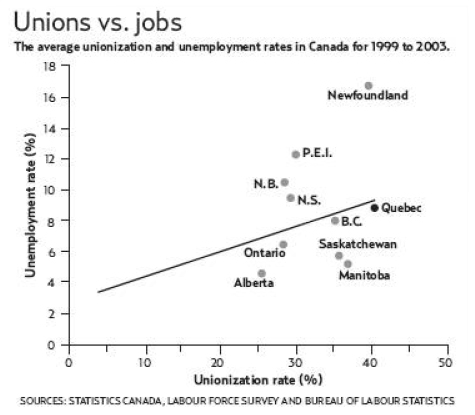 Norma Kozhaya is an economist at the Montreal Economic Institute.