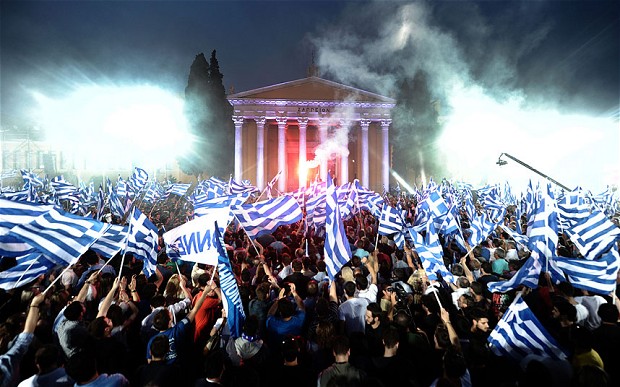 The victory of the left-wing Syriza party in Greece’s elections on Sunday was widely reported as a blow to austerity. I must set the record straight about the popular use, and abuse, of the word “austerity.”

To speak of this political event as an encouraging one for the “anti-austerity” movement in Europe and elsewhere is simplistic. As if some masochistic groups were “pro” austerity, wanting more than anything to live through hard times and do without. The odd Tibetan monk who’s relinquished all his worldly goods, maybe. But large political movements in modern Western nations? Austerity is not something anyone wants; it’s something painful that is sometimes necessary to bring public finances under some semblance of control.

But what has “austerity” meant in Europe these past few years? The evidence showing austerity measures have been implemented are statistics showing that deficits have gone down. But that’s a limited measure: Deficits are annual shortfalls of revenue compared to expenses. Shrinking deficits do not translate into lower debts; shrinking deficits mean debts are growing less rapidly than they did before.

So debts are allowed to grow bigger, albeit at a slower pace. And because the economy has not recovered, we should conclude that austerity has failed? In reality, austerity has hardly been tried in Europe. And even to the meagre extent that it has been tried, it is not governments that by and large have tightened their belts, but taxpayers who have been forced to further tighten theirs.

According to Eurostat, in the third quarter of 2014, total government expenditure in the EU stood at 48.0 per cent of GDP, lower than its peak in 2009 but still well above where it stood in 2007 at 45.6 per cent. Total spending in the EU grew by 6.3 per cent from 2009 to 2012, during the period when so-called “austerity” policies were being applied. Thus, whenever finance ministers announced budget cuts, they didn’t mean absolute reductions in total spending; they meant spending increases that were lower than previously planned, or cuts that were more than offset by spending increases elsewhere.

So how did deficits go down while spending was going up? Simple. Tax revenues went up even more, by 12.9 per cent from 2009 to 2012, rising twice as fast as government spending. No wonder many are up in arms against government “austerity” measures that require sacrifices only from taxpayers, and that are too anemic to have much positive effect anyway.

The financial troubles of those who spend too much compared to their revenues and their tax bases, and hence who borrow too much, will not disappear as if by magic just because politicians oppose the faux austerity of their opponents. Countries must reimburse their creditors and honour their commitments, regardless of which end of the political spectrum they claim to represent. Otherwise, these creditors will raise the rates they charge, or refuse to lend to them altogether in the future.

If we define austerity very narrowly, as measures taken to reduce budget deficits, then Europe has undergone some austerity in recent years. But if we define it more properly as policies bringing about a reduction in the size of bloated government, then these policies cannot be held responsible for the ongoing crisis in Europe, because they were never really applied. Governments in almost all European Union countries are as large as, or even larger than, they were when the financial crisis started in 2007.

The cure for what ails Europe is smaller governments: less public spending, deregulation of job markets, and other structural reforms to encourage entrepreneurship, private investment and job creation. Governments need to slim down, so that individuals and businesses can thrive again. To imply that this kind of free-market approach has already been tried and has failed is frankly ridiculous, not to say intellectually dishonest.