I was very pleased to hear about your recent trip to the oilsands region of Alberta. As you said afterwards, these are extraordinary undertakings. Human ingenuity knows no bounds and we are fortunate to live in a country where it is allowed to flourish.

I know you are too busy now in your new job to follow closely what my organization is doing, as you did some years ago, but we have published a couple of papers lately on natural resources and the oilsands industry in particular. I believe it is an issue of crucial importance to the economic future of our country.

In the context of the national debate sparked by your comments on the so-called "Dutch disease," I thought it might be useful to send you the following graph. As the saying goes, an image is worth a thousand words. 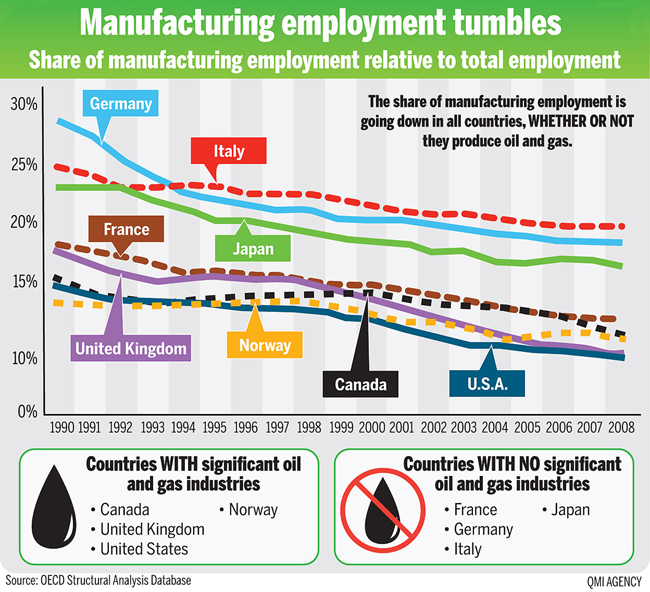 As you can see in the graph published here, there is no question that the share of manufacturing jobs has been declining in Canada. Their proportion of total employment went from 15% 20 years ago to 11% in 2008. This fact seems in accord with one part of the "Dutch disease" theory.

As you well know, according to that theory, the value of our currency is driven up by global demand for our oil and gas, and this in turn harms manufacturing exports and causes that sector to shrink.

What's interesting, though, is that this shrinking of manufacturing employment has been happening not only in Canada, but in all other industrialized countries as well, whether or not they produce oil and gas.

For example, Japan, France, Italy and Germany do not produce significant amounts of oil and gas, and yet, their manufacturing sectors have been shrinking to the same extent as Canada in terms of jobs.

The reason for this is simple and well known: Thanks to continual increases in productivity (brought about by mechanization, for example), we need fewer and fewer workers to produce more goods than before.

I hope this nugget of information will contribute to your thinking on this question and that I will have the pleasure of seeing you again sometime soon.