2020 Ranking of ER Overcrowding in Quebec

In which Quebec emergency rooms are patients most likely to return home without having seen a doctor? The “2020 Ranking of ER Overcrowding in Quebec” describes the situation over the past year and measures the evolution of the situation over five years using data obtained through a request for access to information, before the COVID-19 pandemic.

This ranking was prepared by Patrick Déry, Senior Associate Analyst at the MEI, in collaboration with Daniel Dufort, Senior Director of External Relations, Communications and Development at the MEI. The MEI’s Health Policy Series aims to examine the extent to which freedom of choice and entrepreneurship lead to improvements in the quality and efficiency of health care services for all patients.

Last year, nearly 380,000 Quebecers—or over 1,000 patients a day—left a hospital emergency room without having been attended to by a doctor, and without having been redirected, according to the data from Quebec’s Department of Health. In all, more than one in ten patients who visited an emergency room gave up on receiving care. Even worse, one fifth of these patients had been classified as “very urgent” or “urgent” during triage (Priority 2 or 3), which indicates that their condition could put their life in danger.(1) However, there is significant variance within the province, and even from hospital to hospital, as we shall see.

The Snapshot and the Longer View

The overcrowding of Quebec emergency rooms can be quantified in two ways. The first is to take a static picture or “snapshot” of the current situation: What proportion of patients, in a given hospital or region, return home without having seen a doctor after having gone through triage? The second is to measure its evolution: How has this percentage varied over the past five years? Has it risen, remained stable, or fallen?

Looking at these two kinds of data provides a more complete picture of the situation. Certain regions, and certain hospitals, can fare somewhat better in terms of the proportion of patients who turn back, but their situation has deteriorated over the past five years and so is trending downward. Conversely, in other places, important progress may have been made, even if significant challenges remain.

Which emergency rooms do the best job of meeting the demand for care? Where are patients most likely to give up and go home? And how has the situation evolved over the past five years? The current ranking presents a picture of ER overcrowding in Quebec, grouped in three ways: first, a regional ranking, which compares the general situation in each of Quebec’s Integrated Health and Social Services Centres (CISSS and CIUSSS) and University Hospital Centres (CHU); next, a detailed ranking of each of the 117 emergency rooms listed by Quebec’s Department of Health and Social Services; and finally, a second ranking of hospitals, this time grouped by the region served.

The general situation leaves much to be desired: No emergency room in Quebec manages to respond to patients’ demand for care. Yet the picture is far from uniform: Some hospitals see fewer than 5% of their patients turn around and go home, while for others, it’s nearly one in four who give up on receiving care, notably in the Outaouais and Laurentian regions. If we look instead at the change over the past five years, the situation improved significantly for certain hospitals located in the Mauricie region and in the Lower St. Lawrence region.

The regional picture shows, for its part, that the portion of the province located north or east of Quebec City generally fares better than the western part of the province, except for the North Shore. Quebec City, Greater Montreal, and the Outaouais—basically, the urban regions—are the places where patients are most likely to give up and go home. The dynamic picture accentuates these trends: A part of eastern Quebec has improved over the past five years, as has the Lanaudière region, and—surprisingly—the northern part of the Island of Montreal. However, many Montreal emergency rooms, in particular those located close to downtown, are increasingly overcrowded.

Taken individually, the data must be contextualized. Certain very efficient hospitals—notably Montreal’s Jewish General Hospital and the Centre Paul-Gilbert on the south shore of Quebec City—remain very highly ranked, even if their performance has slipped somewhat over the past five years; by itself, the variation in the proportion of patients who left their ERs does not paint a fair picture of their situation. The same is true for a certain number of small emergency rooms.

It is important to note that the current ranking is in no way meant to criticize the staff that cares for the patients in the province’s health care facilities. The challenges are enormous, and growing, and they are combined with a shortage of staff while the population is aging and its needs are ever greater.

The ways to alleviate these chronic problems are known: a reduction of professional and regulatory barriers, a better alignment of incentives with patients’ needs, and a general improvement of the performance and the efficiency of our health care system all while maintaining its universality,(2) so that everyone can be treated when the need arises. To paraphrase a former Supreme Court judge’s famous quotation, access to a waiting room is not access to health care.(3) Having to return home untreated when one is ill is even less so. 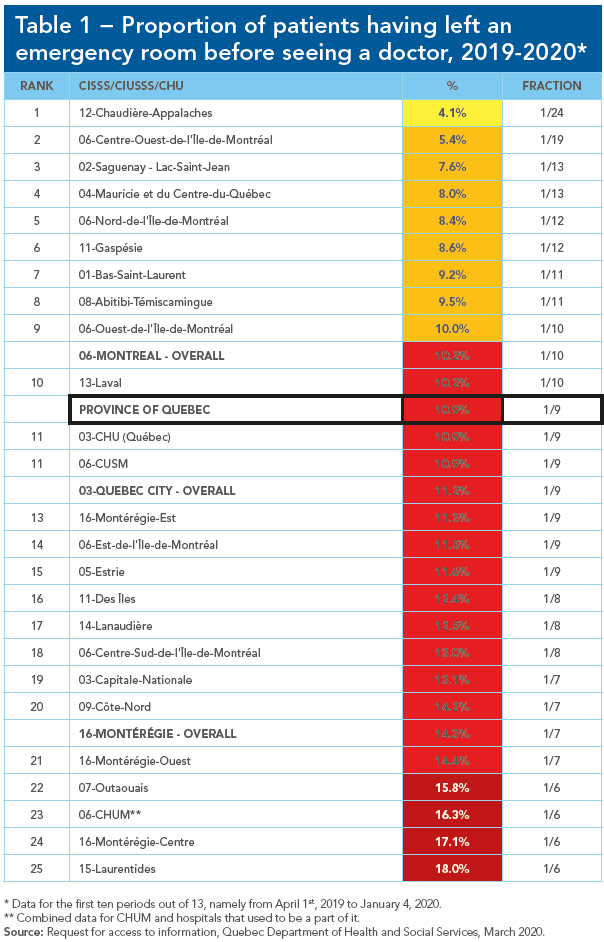 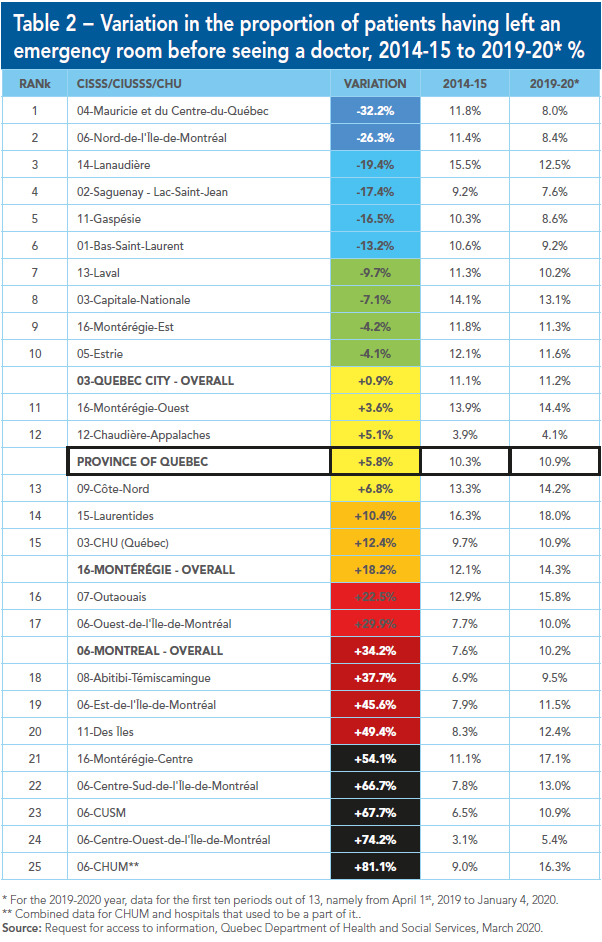 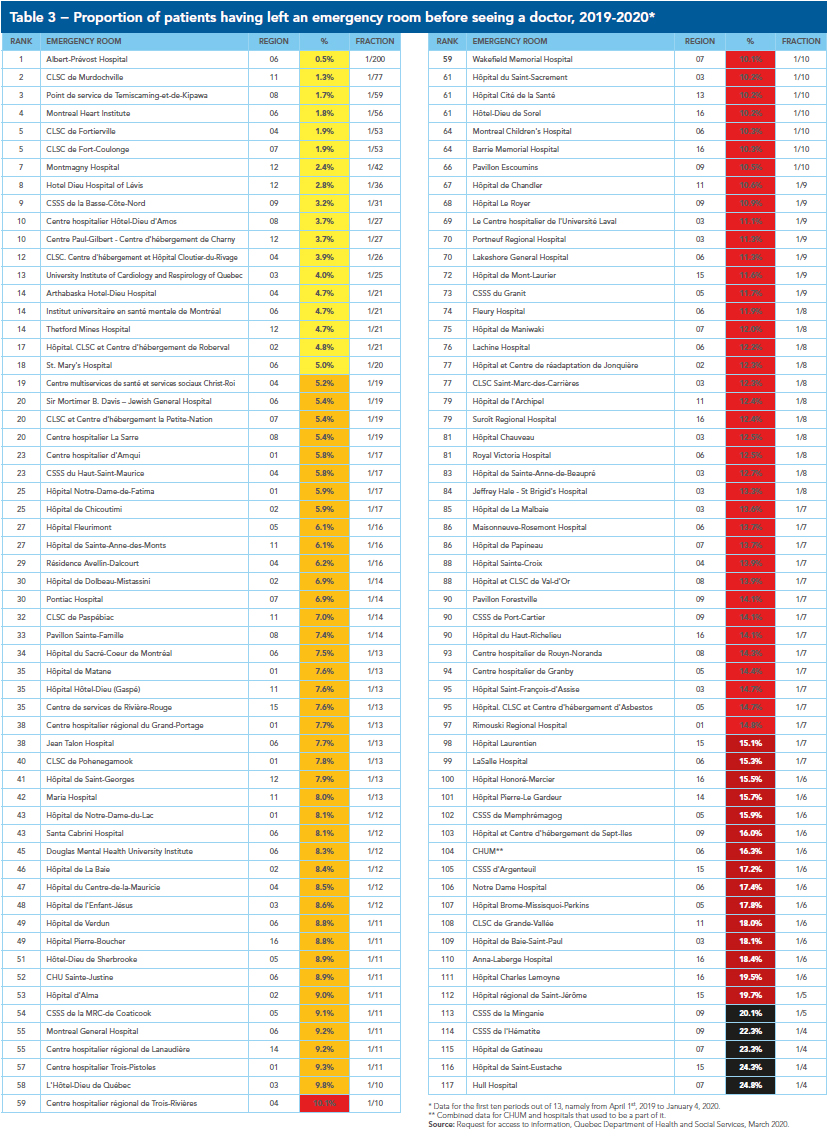 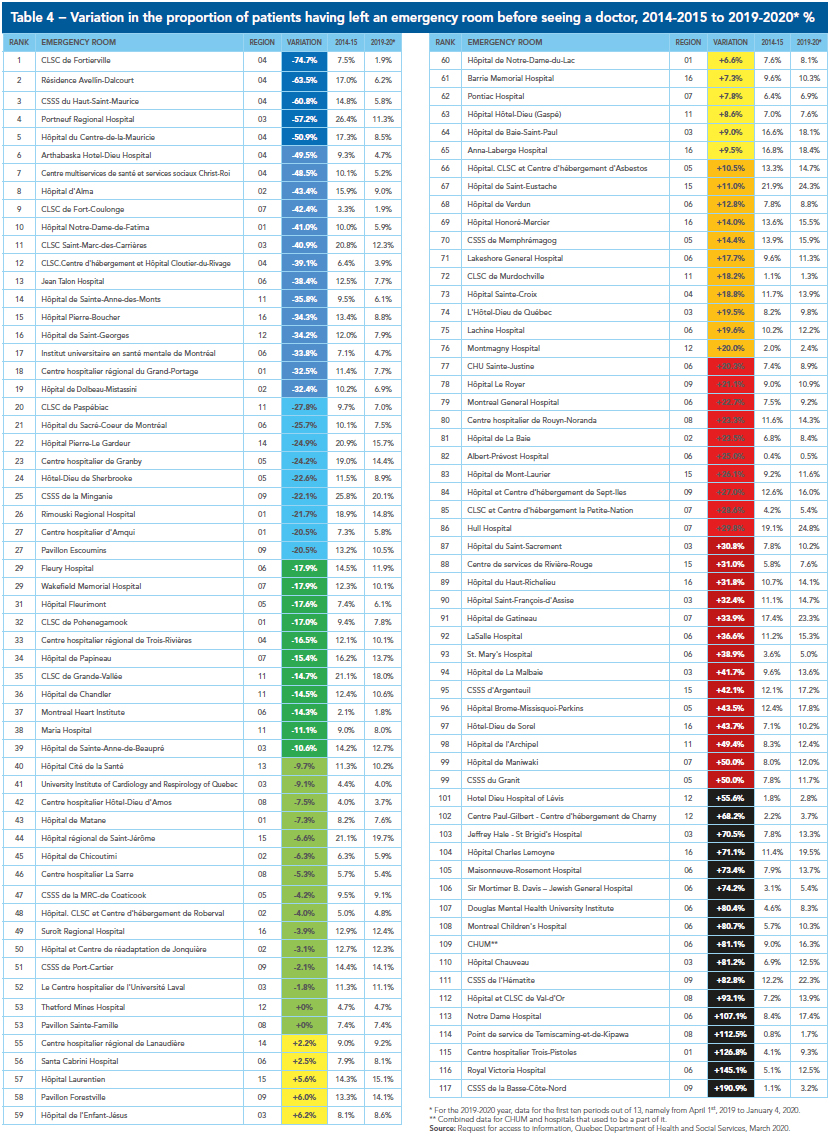 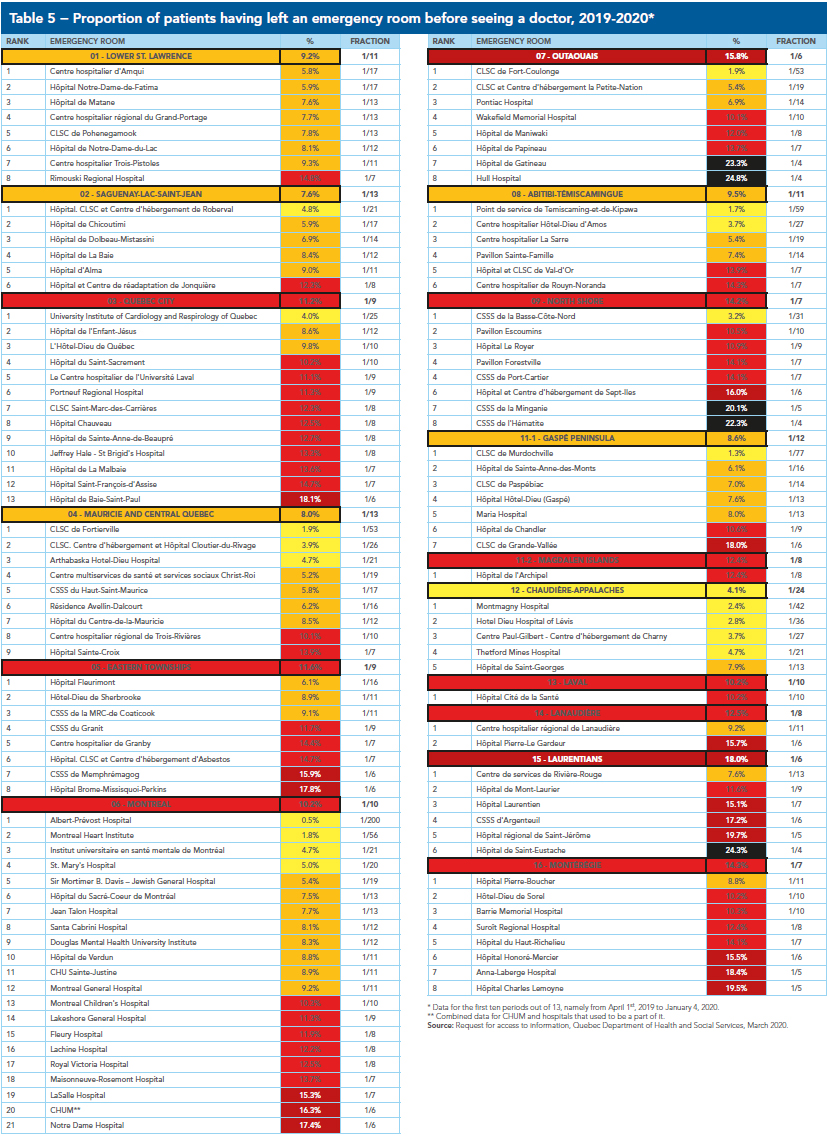 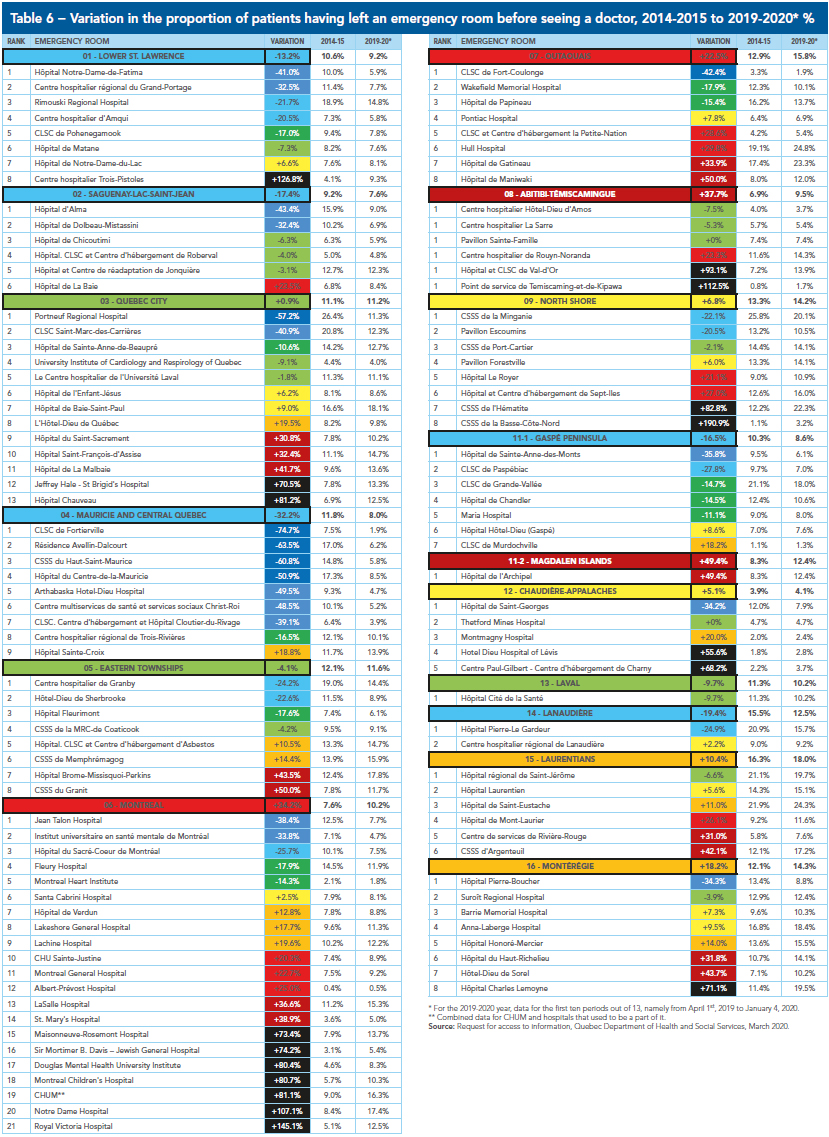