Viewpoint showing that the complexity of the tax system keeps many Canadians, often of modest means, from claiming all the sums to which they are entitled

With tax season in full swing, Canadians once again have to devote time and money to filling out their income tax returns. Unfortunately, a lot of them—including many of modest means—will not claim the considerable sums to which they are entitled. This troubling situation is due to an overly complex tax system, as shown in this MEI publication.

This Viewpoint was prepared by Luc Vallée, Chief Operating Officer & Chief Economist at the MEI. The MEI’s Taxation Series aims to shine a light on the fiscal policies of governments and to study their effect on economic growth and the standard of living of citizens.

Tax season is upon us, which means taxpayers will once again have to devote time and money to filling out their income tax returns. Unfortunately, a lot of them—including many of modest means—will not claim the sometimes considerable sums to which they are entitled. This situation is partly due to a lack of knowledge and resources, but it is mostly the result of our overly burdensome and complex tax system.​

Since the value of potential tax refunds not claimed by Canadian taxpayers is to some extent “invisible,” it is difficult to measure. However, data on the use of certain programs or tax credits give us an idea of its magnitude.(1)

For example, according to Employment and Social Development Canada, just 31.2% of people eligible for a Registered Disability Savings Plan (RDSP) benefit from it.(2) A 2018 Senate report pointed out that fewer than 40% of the more than 1.8 million Canadian adults who are eligible for the Disability Tax Credit claim it.(3) Moreover, as Finance Canada itself admits, some 240,000 low-income Canadians eligible for the Canada Workers Benefit do not receive the amounts to which they are entitled, on account of the complexity of the forms. Over $175 million of these benefits were not claimed in 2014.(4)

Another generous program remains unused by thousands of families that really need it: the Canada Learning Bond. For low-income families ($47,630 or less), the federal government provides $500 upon the opening of a Registered Education Savings Plan (RESP), without the household having to make a contribution. Ottawa then adds $100 per child, each year, for a maximum of 15 years. A total of $2,000 per child is therefore waiting for these families, without their having to contribute a single penny. Yet in 2016, two-thirds of eligible children—some 1.8 million Canadians—were still not benefiting from this program.(5)

Prosper Canada, a charity dedicated to expanding economic opportunity for Canadians living in poverty, estimates that each year, over $1.4 billion in federal benefits of all kinds are not claimed by people who are entitled to them.(6)

Several reasons can explain this state of affairs, including a lack of financial literacy or even of general literacy, lack of computer skills, lack of access to accounting resources (notably among those with lower incomes), or even the lack of incentives for certain taxpayers who earn little and who don’t see the benefit of taking the time to fill out their tax returns, and even less of paying an accountant to do so.(7)

However, the complexity of the Canadian tax system seems to be a more important reason than all of these. Indeed, it continues to grow year after year. While the Income Tax Act was 4,000 words long when it was enacted in 1917, today it comprises over 1.1 million words. The law is therefore 275 times longer now than when it was created.(8) Just since 2005, it has gotten more than a third (37%) longer, as shown in Figure 1.(9) 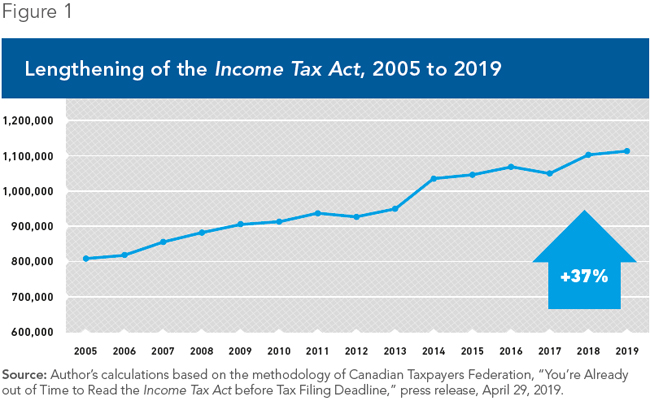 The Canadian tax system also contains a high number of credits, deductions, and exemptions. The number of these personal income tax breaks and refunds increased by 39% between 1991 and 2015, at which point their total value had reached a little over $84 billion.(10) Even a large majority of chartered professional accountants think that the current system of tax deductions and credits is too complex.(11)

The Canadian government provides certain tools to help taxpayers fill out their tax returns or identify programs and subsidies to which they are eligible.(12) There is the Benefits Finder, for example, a government site,(13) or the Community Volunteer Income Tax Program, thanks to which community organizations host free tax clinics where volunteers fill out tax returns for eligible people.(14) Non-profit organizations are also at work in the different provinces to help taxpayers. Professional orders of accountants also offer free tax clinics.(15)

The Solution Is Simple

The initiatives described above—which themselves entail expenditures for the government or for the organizations involved—have their limits, however, as illustrated by the amounts that remain unclaimed by vulnerable people. Taxpayers’ recovery of all the sums they are due will therefore only be possible following a serious simplification of the Canadian tax system.

This simplification necessarily implies a reduction in the size and complexity of the Income Tax Act, but also the elimination of many tax credits and deductions. The essential counterpart to this is an equivalent reduction in tax rates or the raising of exemption thresholds in order to avoid increasing effective tax rates.(16)

In sum, the complexity of the Canadian tax system not only imposes substantial costs on all taxpayers, but also has a disproportionate effect on the most vulnerable among us. Instead of, on the one hand, maintaining a costly, unfair system that gets more complex by the year, and on the other hand, spending significant resources to help taxpayers navigate it, the government would be wiser to simplify the tax system, to the benefit of all Canadians.