Economic Note examining the benefits, for universities and for students, of aligning tuition fees with the costs of different educational programs

This Economic Note was prepared by Michel Poitevin, Senior Fellow at the MEI and professor in the Department of Economics at the Université de Montréal. The MEI’s Education Series aims to explore the extent to which greater institutional autonomy and freedom of choice for students and parents lead to improvements in the quality of educational services.

During the 2012 “Maple Spring,” students were out in the streets in Montreal every day for several weeks to protest a substantial tuition fee increase proposed by the Charest government.(1) In the end, the student movement carried the day and the increase never materialized. Since then, the issue of tuition fees has been completely purged from the public debate in Quebec.

Economic efficiency dictates that tuition fees set by the government should approach those that would emerge from competition between universities, adjusted to account for the positive social externality that higher education confers upon Quebec society. Optimal tuition fees would thus equal the marginal cost of educational programs, less the marginal social externality.

Under the current policy, universities charge the same tuition fees for all programs. This creates major imbalances between what students pay for different programs and the costs of those programs.

Certain students, for example in social sciences, pay a large percentage of the cost of their education, while others, for example in veterinary medicine, pay only a very small portion. Students in social sciences therefore indirectly end up heavily subsidizing students in other disciplines with high costs. Since in most cases, the disciplines with elevated educational costs are associated with high salaries after graduation, the current policy, in addition to being inefficient, generates flagrant and completely unjustified inequalities between students in different programs.

A more appropriate tuition fee policy should therefore be based on institutional program costs (as measured by the Department of Higher Education) and take into account the positive social externality of a university education.

Researchers Rui Castro and Michel Poitevin(2) have estimated that the positive social externality of a university education represents 40% of the total return on this education, which is relatively generous in light of the literature on the topic. As a result, the tuition fees proposed are lower than they would have been if we had assumed a smaller externality. Thus, students should pay 60% of the total cost of their education. Since this cost includes not only institutional costs, but also the wages they give up to attend university, Castro and Poitevin calculated that students should pay one-third of the institutional costs of their education.

On the basis of these calculations, we developed our proposal for tuition fees (not including ancillary fees) for undergraduate and graduate (Master’s) levels (see Table 1). Fees are calculated for the 2021-2022 year, the most recent for which the data are available. 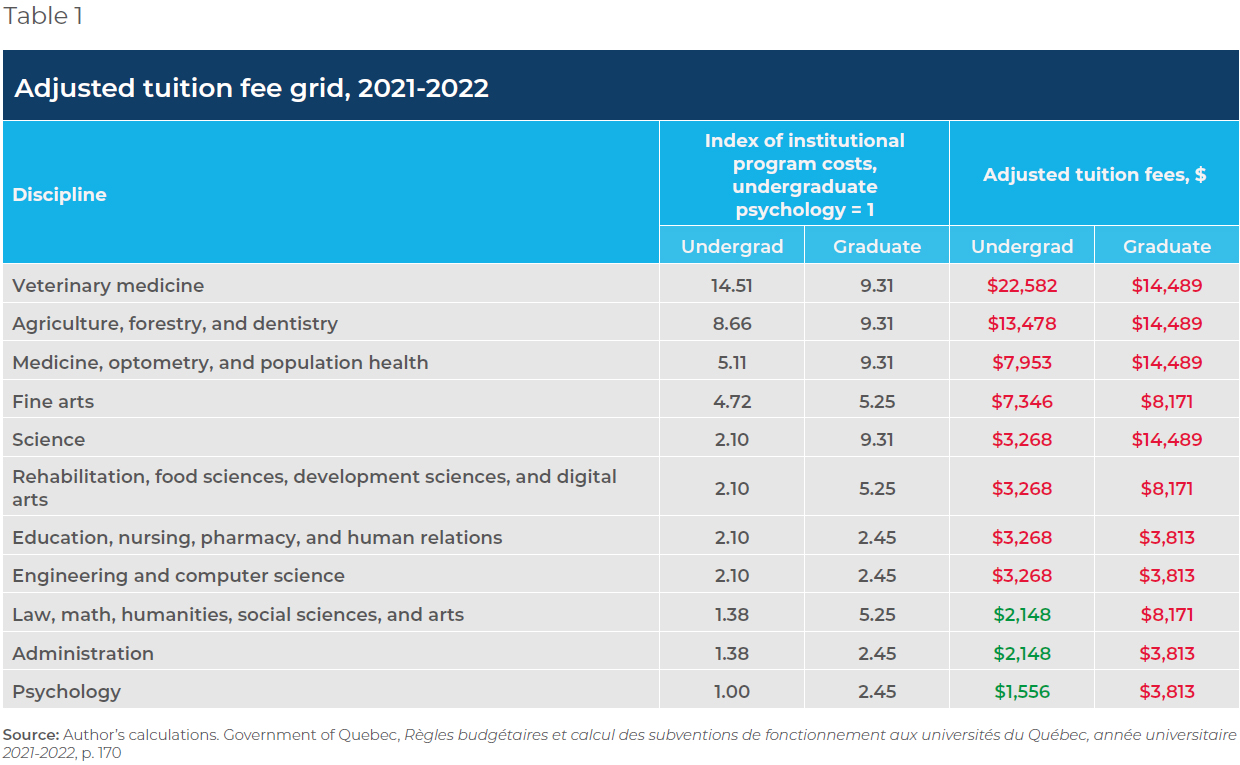 For each discipline (following the Department of Higher Education classification), the first two columns present an index of the institutional costs of education relative to undergraduate psychology, which is the least costly discipline. Therefore, an undergraduate psychology education has an index of 1.00, while veterinary medicine is nearly 15 times (14.51) more expensive.(3)

By estimating the total cost of education, and assuming that the student pays 60%, we calculate the total tuition fees that Quebec students should pay. Using the grid for the weight of each discipline and the number of students enrolled in each of them, we calculate that a student in psychology should pay $1,556 for the 2021-2022 school year. The tuition fees of the other disciplines are simply multiples of this amount, determined by the cost indices.

Students in more expensive programs end up paying much higher fees. For example, an undergraduate student in veterinary medicine should pay tuition fees of $22,582, and a dentistry student, $13,478, while an engineering or computer science student should pay $3,268. A similar logic applies to graduate students. The higher optimal tuition fees at the graduate level are due to the lower student-professor ratio, which increases program costs.

If we compare the tuition fees proposed in this grid with the fees actually paid by students in 2021-2022, namely $2,725, it can be seen that undergraduate students in the last three categories (representing 55% of undergraduate students in 2021-2022)(4) overpaid compared to the amount it would have been efficient to charge them, while the rest did not pay enough. At the graduate level, all students paid too little (compared to the efficient policy), which is not surprising given the cost of educating a student at this level.

The tuition fees proposed here are very reasonable compared to those charged by large Canadian universities like the University of Toronto (U of T) and the University of British Columbia (UBC). While comparisons are not easy given the groupings of disciplines in Quebec, at U of T, for the 2022-2023 year, at the undergraduate level, tuition fees are $6,100 in arts and sciences.(5) In administration, they are $6,100 the first year, and then climb to $15,900 for years 2 to 4 of the program.(6) Tuition fees in dentistry are $37,080,(7) and in medicine, $23,090.(8)

Impacts on Accessibility and University Revenues

What would be the impacts of adopting such adjusted tuition fees? A first consequence is that many students would pay more for the education they currently receive, which could have an effect on accessibility. It is unlikely, though, that this adjustment would have a substantial effect on access at the undergraduate level.

On the one hand, tuition fees will fall significantly for 55% of undergraduate students. On the other, the students who will pay more are the ones with the best employment prospects following graduation. (One exception is fine arts, where training is very expensive and employment prospects are more variable). It can therefore be expected that most students would pursue their studies even in those disciplines that became more expensive. For those without the means to access these disciplines, the government could augment its financial aid to good students in need.

At the graduate level, although the increase can seem large, it must not be forgotten that the length of the program is one or two years, and that graduation generally leads to very good jobs, better than students would get with an undergraduate degree. These studies will therefore remain very profitable for students despite the higher fees. Once again, financial aid could be increased for students in need.

It is possible that the needs of the labour market might lead the government to favour certain disciplines. In this case, the government could (as it announced it would do in the spring of 2022) offer targeted bursaries to attract students to these disciplines that are considered a priority.

Such an injection of funds could serve to finance students in need who would be particularly affected by the increased fees in their discipline, but above all, it could also serve to improve the quality of the programs offered, and thus partly close the funding (and quality) gap between Quebec universities and those in other parts of the country (see Figure 1). 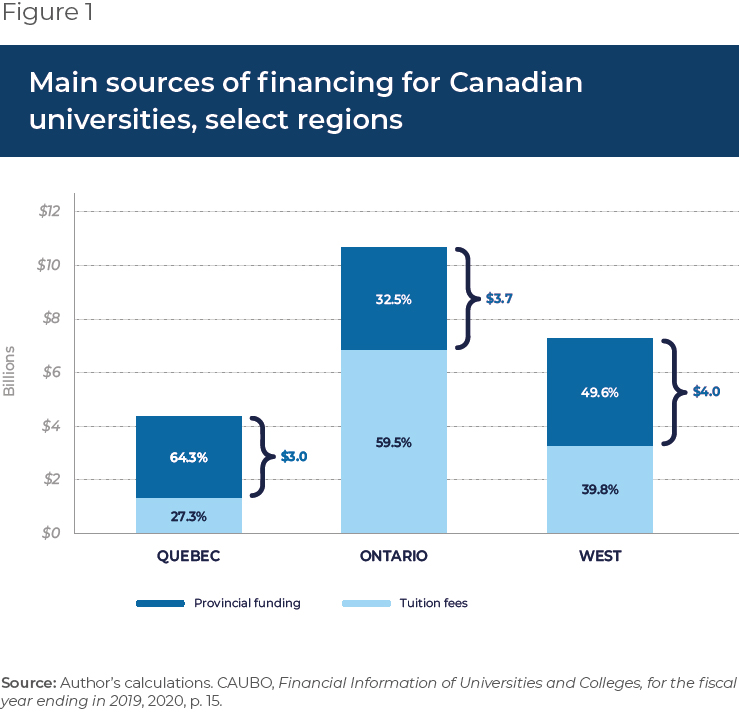 Tuition fees make up a much smaller share of the total funding of universities in Quebec than elsewhere in Canada, while public financing represents a much larger share. This funding structure makes Quebec universities vulnerable to political decisions that are often quite fickle. And it cannot be said that the Quebec government compensates for lower tuition fees, as total provincial funding is actually quite a bit higher elsewhere in Canada.

A final consequence of this adjustment would be that a majority of undergraduate students would enjoy a relatively substantial decrease in their tuition fees. This policy therefore appears politically feasible.

In summary, adjusted tuition fees would be more efficient and fairer for students, as all would pay the same percentage of the costs of their education. Moreover, as the adjustment is aligned with the costs of the different programs, it sends better signals to students regarding these costs. Adjustment also helps improve the quality of our universities and programs by injecting them with additional funds. This would partially close the funding gap between Quebec universities and other Canadian universities.

Finally, the impact of adjustment on university attendance would be minimal because a large number of students would pay lower—or only very slightly higher—fees, while those whose fees went up would be those who study in higher value-added disciplines like medicine or veterinary medicine. The case for adjusted tuition fees for Quebec universities therefore seems like a strong one, benefiting universities and students alike.