This Viewpoint was prepared by Maria Lily Shaw, Economist at the MEI, and Gabriel Giguère, Public Policy Analyst at the MEI. The MEI’s Taxation Series aims to shine a light on the fiscal policies of governments and to study their effect on economic growth and the standard of living of citizens.

The minimum wage has once again entered the spotlight, the most recent announcement being that it will increase from $13.50 to $14.25 an hour on May 1st, 2022. This 5.6% hike is seen as a disappointment by unions and activist groups(1) that are demanding an immediate increase to $18/hour, a 33% jump. While such an increase might seem very generous to low income workers at first glance, it should not be implemented without evaluating its costs, both for workers and the businesses that employ them.

No fewer than nine out of ten small and medium-sized enterprises would be directly affected by such a minimum wage hike.(2) Retail employs 45% of all minimum wage workers, the largest percentage of any sector, followed by the accommodation and food services sector with 23%. Together, these two sectors thus account for 68% of minimum wage earners, a total of over 182,000 employees.(3)

These sectors also have very low profit margins.4 Businesses in these sectors don’t have much left over once they have paid their taxes and subtracted their administrative and operating expenses such as material, labour, and manufacturing costs.(5) The profit margins for gas stations and restaurants, for example, are less than 3%,(6) meaning that for every $100 they make in sales, they take home a net surplus of only $3 once they have paid their employees and covered their other expenses.

There is no doubt that a sudden and drastic hike in the minimum wage would jeopardize the financial health of many businesses in the retail, food services, and accommodation sectors. To reduce expenses, these businesses would be forced to resort to laying off employees, cutting hours, or passing the bill on to consumers. As a result, some of the 182,000 minimum wage workers in these sectors would be at risk of losing their jobs.

According to a widespread belief, the typical minimum wage worker in Quebec is a single mother. This stereotype, however, is far from reflecting the reality of the matter. 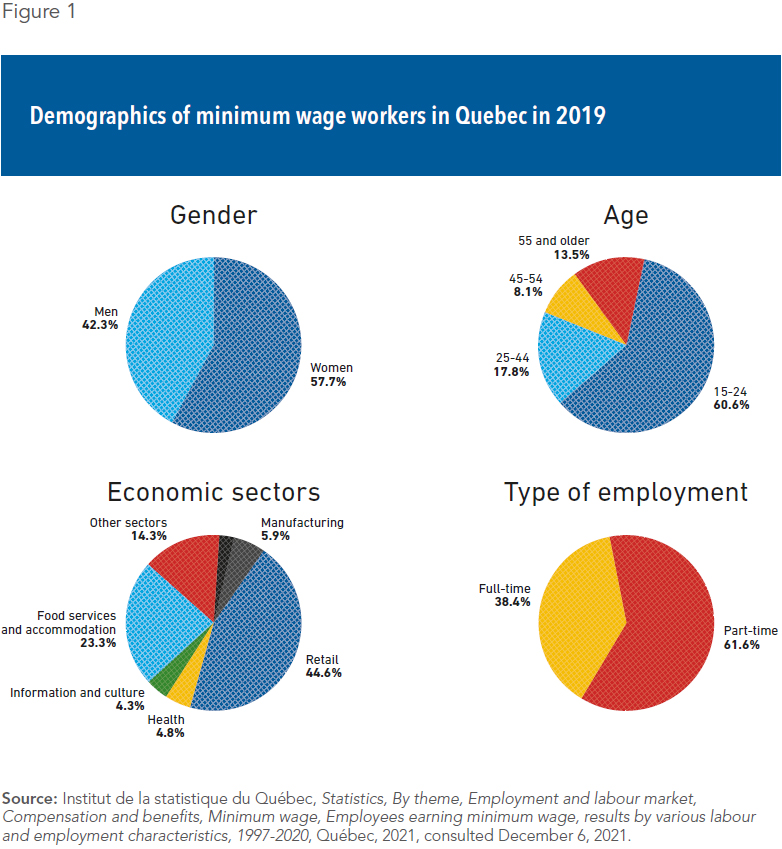 ​The typical minimum wage worker in Quebec is therefore between 15 and 24 years of age and has a part-time job in retail, food services, or accommodation. This is a far cry from the scenario frequently painted by political parties of the precarious single mother, who makes up only a small fraction of such workers.(14) Still, it is worth taking a closer look at the after-tax income of single‑parent families, which is also not what you would expect.

A Much Higher Net Income

Working for minimum wage as a single parent does not have the same consequences as for part‑time students. Indeed, the tax system factors in the needs and responsibilities of a person with dependent children, a fact that is too often ignored in conversations on hiking the minimum wage.

Picture a single parent working 35 hours a week for 52 weeks a year. In 2021, their hourly wage of $13.50 works out to an annual gross income of $24,570.(15) Those seeking to justify major increases in the minimum wage often stop here, which does not provide us with an accurate picture of the situation of these workers. Single parent workers actually receive an additional $12,615 in various benefits. After subtracting taxes and contributions, their annual net income amounts to $34,672 (see Table 1), which effectively takes them from $13.50 to $19.05 an hour. This net wage is higher than the increase being demanded by unions. 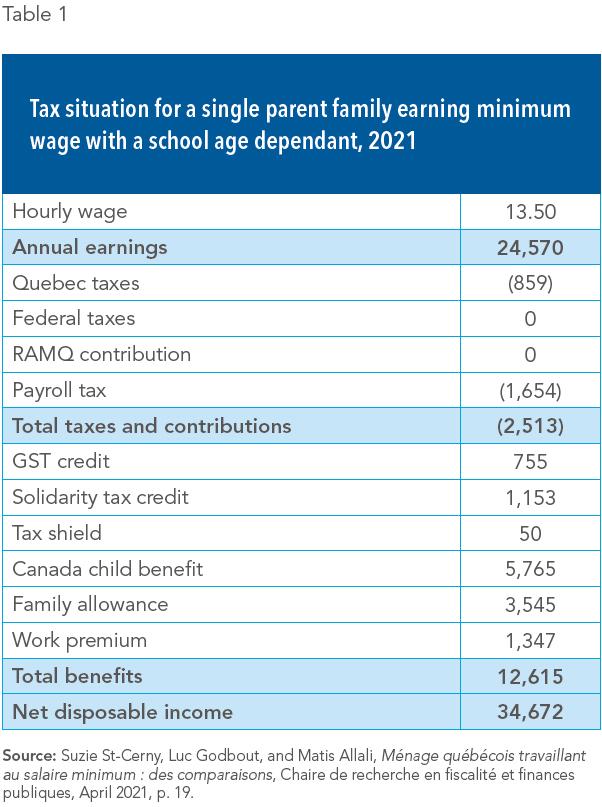 A dramatic hike in the minimum wage, were it to be adopted, would have a negative impact on the very workers it seeks to assist and on Quebec’s economy in general. It would jeopardize the jobs of typical minimum wage workers, namely students with part‑time positions in sectors that might not be able to absorb such an increase, given their very thin profit margins. As for single mothers, often used to illustrate the plight of minimum wage workers, their situation is not at all representative of the category. Furthermore, there exist other, more effective and less economically harmful methods to directly assist single mothers, such as education and training, as well as more targeted measures.