Viewpoint showing that governments should make it easier, not harder, to hire freelancers and part-time workers

This Viewpoint was prepared by Peter St. Onge, Senior Economist at the MEI, and Daniel Dufort, Senior Director of External Relations, Communications and Development at the MEI. The MEI’s Regulation Series aims to examine the often unintended consequences for individuals and businesses of various laws and rules, in contrast with their stated goals.

Will Canada import California’s job-killing experiment and risk putting freelance work out of the reach of Canadians who need it? A case currently under consideration before the Supreme Court, Uber v. Heller,(1) involves details of a single employment contract, but the larger question is whether freelance workers must be legally considered employees if they want to work.

Casual or “gig” work has been around a very long time, but the sharing economy has put freelancers in the spotlight. It is especially important for anyone who can only work part-time: single parents, college students, the elderly, and seasonal workers. These groups have long counted on the ability to work flexible hours, be they waiters, nannies, deliverymen, or translators.

What has changed is the dramatic creation of new part-time jobs thanks to the internet and cellphone apps. These have expanded the range of services people are willing to hire for, and made it much easier both to work and to hire people for casual work. The sharing economy has created over 60,000 Canadian jobs per year on average between 2005 and 2016.(2) This has been fantastic for consumers, who can now easily hire someone to deliver the groceries, shovel the driveway, walk the dog, mow the lawn, or walk them to their car safely at night. And, of course, now you can call a cab that actually comes on time.

So far, labour laws have helped by sheltering casual workers from the hassle of paperwork, and employers from the risks inherent in hiring permanent employees. Unfortunately, regulators are becoming hostile to this new job creation. California Assembly Bill 5 (AB 5), which took effect on January 1st, 2020, effectively turned freelancers into employees. The goal was to improve conditions for gig workers but, in practice, it has meant the disappearance of their jobs. Mass layoffs of part-time and full-time freelance workers have occurred so far in the media and the film industry, with fears of more to come.(3)

The experience of California illustrates why governments should avoid interfering in the sharing economy. Despite laudable intentions, forcing employers to provide benefits to contract workers risks pricing low-wage workers out of employment altogether. Studies have also shown that even when the company is paying for the benefits, the costs get directly passed along to the employees.(4) So even workers who don’t lose their jobs end up paying for the mandated benefits through reduced wages.

Empirically, job losses from mandatory benefits disproportionately target low-income workers. A similar phenomenon occurred in Ontario when 50,000 young workers lost their job in the wake of a hike in the minimum wage from $11.49 to $14.00 on January 1st, 2018.(5)

Losing one’s job not only hurts the worker today, but can negatively impact future job prospects. One study found that the simple fact of having a part-time job reduces the odds of being unemployed a year later by over 80%—from 25% for unemployed workers to just 4% for part-time workers. Working part-time also considerably increases the chances of having the work situation you prefer a year later, whether full-time or part-time, from 41% for those unemployed to 69% for part-time workers (see Table 1).(6) In other words, a great way to get the job you want is to work any job right now. 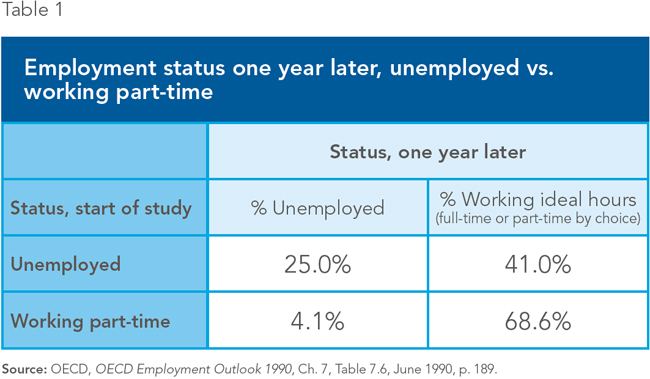 Statistics Canada estimates that only one in four part-time workers (24%) are led to work part-time due to economic conditions. Nearly half (48%) have to care for children or other family members, have a disability, or are going to school, while 28% have voluntarily chosen to work part-time.(7)

Flexibility is key to the sharing economy: to work, to hire, to buy and sell. This is true as much for employers as for employees, who can be students or retirees and prefer only working a few hours per week. A poll conducted in the United States in August 2018 showed that only 7% of American contract workers would rather be considered as full employees.(8)

The Canadian economy is one of great upward mobility. A 2012 study of census data found that 83% of Canadians in the bottom 20% of income earners in 1990 had moved up to a higher income category ten years later. In 2009, the percentage of those who had risen into a higher bracket was 87%, with 40% having even reached the two highest quintiles. However, temporary jobs at the bottom of the ladder are often a prerequisite for this phenomenon to endure.(9)

Too often, lawmakers propose reforms that might sound good but actually make the problem worse. Instead of making it harder to hire freelancers and part-time workers, lawmakers should be making it easier. The freedom to contract and to work as one pleases is not only a fundamental right, it is among the most effective ways to help marginal workers who need that first rung on the ladder.