Viewpoint showing that the short-term costs of the current pandemic are going to be large, and that the size of the long-term costs will depend on policy responses

In addition to a health crisis, the coronavirus pandemic raises concerns about an economic crisis. While several commentators draw parallels with the Spanish influenza, this MEI publication analyzes the economic lessons that should be learned from this historical episode.

This Viewpoint was prepared by Vincent Geloso, Assistant Professor of Economics at King’s University College and Associate Researcher at the MEI. The MEI’s Health Policy Series aims to examine the extent to which freedom of choice and entrepreneurship lead to improvements in the quality and efficiency of health care services for all patients.

The coronavirus pandemic has sparked concerns of a possible recession. In response, certain commentators have pointed out that past influenza pandemics could enlighten us about potential economic damage. One epidemic frequently evoked is that of the Spanish influenza, which spread at the end of the First World War (1914-1918). This flu infected half a billion individuals and killed at least 50 million.(1)

Two lessons can be drawn from this episode: first, that the short-term costs of the current pandemic are going to be large; and second, that the size of the long-term costs will depend on policy responses.

The Spanish influenza took a heavier toll on the young adult population, killing mostly workers in the prime of life.(2) With the death of these workers, economic activity flagged. The available data suggest that from July 1918 to March 1919, industrial production in the United States fell by close to 25% (see Figure 1), while business activity fell by close to 16%.(3) In Canada, the decline in real manufacturing output from 1918 to 1919 was 13%, while real GDP fell 7%.(4) 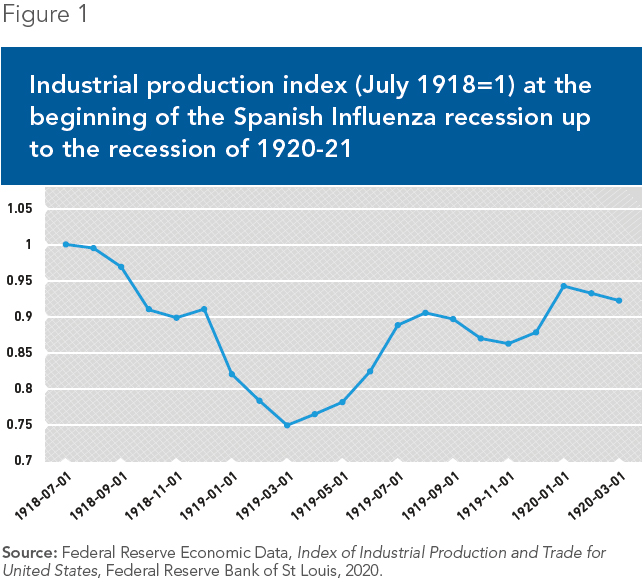 Taking these numbers as indicators of the damage caused by the pandemic alone would be a mistake, however, because they also coincide with the end of the war. As the war ended, the reorganization of industrial activity toward peacetime production entailed some adjustment costs. Some studies have attempted to disentangle the effect of the war from that of the pandemic.(5) The most recent one shows, using a sample of 42 countries, that the influenza pandemic reduced real per capita GDP by 6% in a typical country,(6) whereas the war reduced per capita GDP by 8.4%.

These results teach us a first lesson. The social distancing steps taken today to mitigate contagion risks imply a reduction in the amount of work provided. The size of this reduction is considerable and could rival that of the Spanish flu. However, in the latter case, the recovery was well underway within the year: US industrial production rebounded by more than 25% between March 1919 and January 1920, while business activity rebounded by 22%. This trend would have continued had it not been for drastic changes in monetary policy.(7)

The main difference between the present situation and the Spanish flu episode is that the number of currently projected deaths is nowhere near those seen in 1918. The shock, while costly, is transitory and the recovery could thus be rapid as workers return to work once the contagion subsides.

The relatively optimistic statement above depends on the long-term impact of the measures taken to respond to the pandemic.

A large literature has measured how the 1918 flu affected future economic growth by lowering the potential for long-term productivity growth. For example, one study looking at Japan showed that pregnant mothers exposed to the disease had a negative effect on the health outcomes of their children.(8) Generally speaking, health effects have long-term consequences in the form of slower economic growth.(9)

Slowdowns in potential economic growth are more damaging than is commonly understood. A country that experiences income per capita growth of 2% per year will see its income per capita double more or less every 36 years. If this growth is reduced to 1.5%, it will take 48 years for income to double. Thus, these slowdowns ought to concern us most. Reductions in average real incomes, relative to what might have been, have negative effects on life expectancy, infant mortality, and other indicators of human well-being.(10)

While not negligible, the damages wrought to long-term growth potential by the Spanish influenza are relatively limited according to the available studies. In combination with projections of the damages (even in extreme scenarios) that the coronavirus will generate, this comparison suggests limited damage to long-term economic potential. However, disproportionate policy responses could have a negative effect on this long-term economic growth.

Here, the lesson from the literature on adjustment to other forms of extreme disasters is that public policy choices have large effects on long-term costs due to a reduction in the supply of goods and services when regulations create rigidity in the market.(11)

Policies that create rigidity and limit the set of options available to economic actors, like additional regulation for example, affect the ability to return to pre-crisis economic growth. In fact, recovery from economic crises is significantly faster in countries with greater levels of economic freedom and institutional flexibility.(12) As such, the announcement of relief measures for those most affected could be combined with announcements of the easing of certain regulatory barriers.

The limitation of these long-term costs is a crucial step, and this is where policy-makers have the most influence. The academic literature teaches us that the economic recovery will be faster if the government’s interventions reduce, rather than increase, regulation and obstacles to the freedom to trade for individuals and companies.