Economic Note showing that an overly limited carbon market would destabilize our economy while threatening our energy security and that of our partners, with zero net reduction in global GHGs

This Economic Note was prepared by Guillaume Tremblay, Associate Researcher at the MEI, in collaboration with Olivier Rancourt, Economist at the MEI. The MEI’s Energy Series aims to examine the economic impact of the development of various energy sources and to challenge the myths and unrealistic proposals related to this important field of activity.

In July 2022, the Canadian government published a discussion document proposing mechanisms to cap greenhouse gas (GHG) emissions by 2030.(1) Among these is a cap-and-trade system that would limit emissions for the oil and gas sector alone, considered in isolation from the rest of the economy.

Such a policy, if it were implemented, would likely entail a decline in production, which would have the effect of cutting the revenues of companies in the sector as well as their investments in new carbon capture technologies, thus actually reducing the chances of achieving carbon neutrality by 2050.

The oil and gas sector is divided into three segments. The first is the upstream segment, often called “exploration and production,” which finds and extracts oil and gas; next is the midstream segment, which takes care of transportation by pipeline; and finally there is the downstream segment, responsible for petroleum refining and natural gas distribution.(2)

The government justifies the decision to apply a GHG emissions cap exclusively to the upstream segment based on its high GHG emissions. These represent 84% of the total emissions of the oil and gas sector, which is the biggest emitter in the Canadian economy, and 23% of Canada’s total emissions.(3)

The government recognizes that the oil and gas industry has already considerably reduced its GHG emissions. Oil sands extraction companies have reduced their GHGs per barrel produced by 33% since 1990. They also account for over half of investments in Canada’s energy transition(4) and the achievement of carbon neutrality.

According to the federal government, additional measures are nonetheless necessary in order to hit the ambitious GHG reduction targets of 40% by 2030 as compared to 2005.(5)

Yet the oil and gas industry is already subject to many regulations regarding GHG emissions, such as methane regulations,(6) clean fuel regulations,(7) and the federal carbon pricing program.(8)

The implementation of the new cap-and-trade system(9) for GHG emissions would therefore add to an already heavy regulatory burden. But applying such a measure to one sector in isolation from the rest of the economy would also go against the logic of how cap-and-trade systems work.

What Is the Purpose of a Cap-and-Trade System?

A cap-and-trade system is a mechanism that creates an artificial “market” to determine the price of a pollutant or undesirable product, in this case GHGs.(10) The public authorities, being unable to determine which companies and which technologies will be able to reduce emissions, settle for establishing a cap. They then grant emissions permits(11) to different companies, mainly through auctions. As the goal is to reduce emissions over time, they periodically lower the cap.

By capping the quantity of gas to be emitted and allowing the price to adjust continually in a multitude of trades throughout the economy, a kind of “market” is effectively created for the pollutant targeted for reduction. Once the market is operational, it becomes a costly factor of production. A company must either purchase a permit if it has none, or go without by finding an alternative to the pollutant.

Companies’ emissions must correspond, overall, to the number of permits available to them. If they want to increase their production, they must therefore buy additional permits from other companies, from the same sector or other sectors of the economy, or adopt a new technology that allows them to reduce the quantity of pollutant for a given level of production.

The system as a whole relies on the possibility, and even the necessity, of multiple trades between companies, preferably from all economic sectors, thus allowing the pollutant to be reduced by those who can do so in the least costly manner. Moreover, the possibility of profiting from the sale of permits represents an incentive to innovate and invest in new technologies to mitigate and reduce the pollutant.(13)

Indeed, for companies to buy and sell permits among themselves, they need to have different cost and production conditions. If they all had access to the same mitigation technologies, they would have no reason to trade permits. This is why one of the essential conditions for favouring trade is for participating companies to have heterogeneous mitigation costs,(15) something that is more likely if the companies belong to different sectors.

Isolating the oil and gas sector, as the federal government proposes to do, therefore goes against the optimal operation of a cap-and-trade system for permits to emit GHGs (the “pollutant”), and could lead to a decline in production.

If the proposal were adopted, it would create a much too limited artificial market, with participants having very similar mitigation costs, since it would exclude companies from other sectors accounting for more than three quarters of Canada’s total GHG emissions.(16)

Yet one molecule of CO2 released into the atmosphere by the oil and gas sector has no greater climate warming potential than a molecule of CO2 emitted by a gas-powered car or emitted during industrial processes like the production of steel or cement. If the ultimate goal is the reduction of the atmospheric concentration of GHGs, it makes no difference which economic sector this reduction comes from. It is therefore illogical to consider the oil and gas sector alone and in isolation from the rest of the Canadian economy.

Nor is it certain that we will find, in the coming years, substitutes for fossil fuels to provide the energy for the machinery needed in oil and natural gas exploration and extraction. The Canadian government’s wish that the industry electrify its machinery and use low-carbon fuels in the production process will therefore not easily be fulfilled.

Indeed, despite the $5.416 trillion invested in the energy transition since 2004,(17) fossil fuels still represent 84% of the primary energy used worldwide.(18) Technological solutions for reducing GHG emissions on a large scale are also hard to come by.(19) For example, carbon capture, utilization, and storage (CCUS), a technology considered essential for the energy transition and the reduction of GHGs,(20) is far from being deployed on a sufficiently large scale to have a significant impact in the short term. Indeed, an estimated 7 to 10 years are needed for a CCUS project to be operational.(21) The majority of new projects begun today will therefore not contribute to GHG reductions before 2030.

The relative homogeneity of GHG emission mitigation costs for companies in a single sector, combined with the lack of available substitution technologies, greatly reduces the potential for buying and selling permits in a cap-and-trade system limited to the oil and gas sector alone.

The companies in this sector run the risk of all finding themselves in a situation where they need permits to produce, but none are prepared to sell any. A cap-and-trade system that limits the number of potential trades in this way could easily become simply a cap without trading, which would necessarily entail a decline in production if the emissions cap falls too quickly, in turn leading to several negative economic consequences.

The Economic Impacts of a Decline in Production

If the government decides to go ahead and impose a specific cap-and-trade system for the oil and gas industry alone, it is very likely that the cap selected will be based on what was proposed in the 2030 Emissions Reduction Plan, namely 42% below 2019 levels for the sector as a whole.(22) If the same reduction is applied to the upstream sub-sector targeted by the federal proposal, its cap for 2030 would be around 100 million tonnes (Mt) of emissions.(23)

This means that to maintain the 2019 level of production, the sector will have to reduce its GHG intensity, defined as the emissions produced during the production of one barrel of oil equivalent (boe), by 42% in order to respect the cap. Alternatively, if no new reduction in GHG intensity can be achieved by 2030, the industry will effectively have to reduce its production by 42%. An increase in the production of oil and gas would only be possible if GHG intensity were reduced by more than 42%, and the bigger the reduction in intensity beyond this amount, the more the sector would be able to increase production. 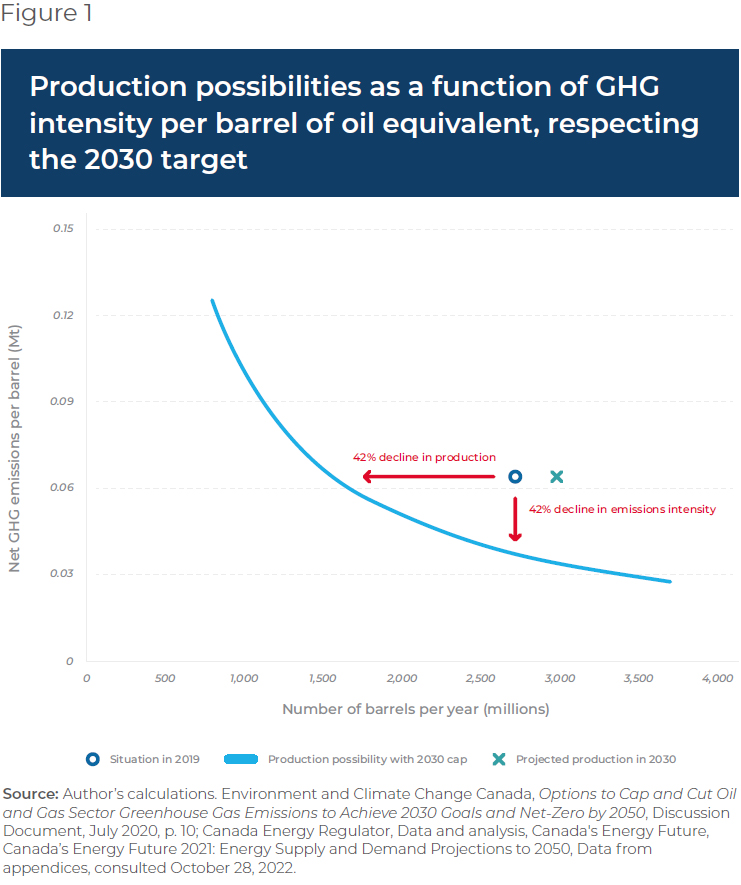 In order to calculate the economic impact of a potential cap on GHG emissions with production of 2.97 billion boe in 2030, three scenarios were examined (see Table 1): 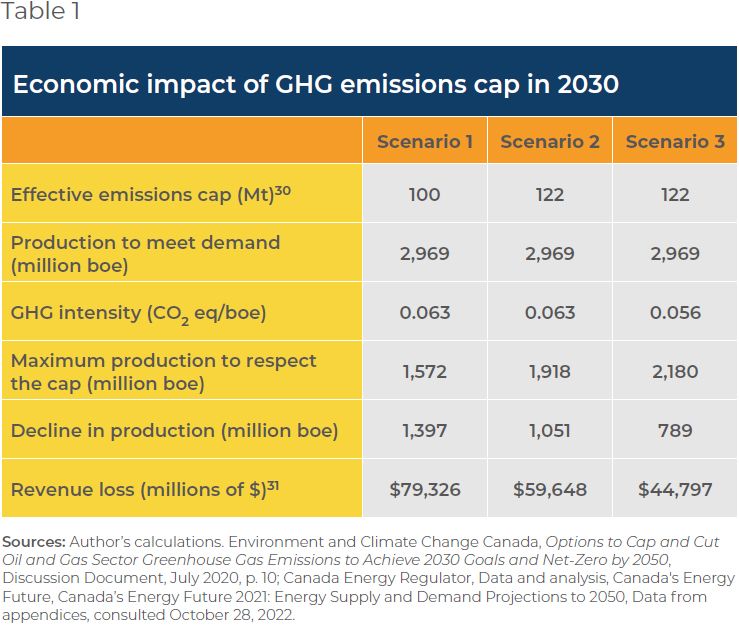 In Scenario 3, we estimate that at best, the impact will be a $44.8-billion reduction in revenues for the oil and gas industry just for the year 2030. In Scenario 1, the reduction would be over $79 billion. Considerable additional economic losses could occur before 2030, depending on the speed at which the cap is lowered.

There would therefore certainly be a reduction in exports to our trading partners, who would have to compensate for the lack of supply from Canada by importing oil and gas from other countries. In fact, the decline in production is such that it could represent the equivalent of our total current annual oil exports.(32)

In addition to threatening our energy security and that of our partners, the net reduction in global GHGs will be zero, and there might even be an increase, if the foreign production that replaces ours emits more GHGs per barrel.

Finally, the production declines risk depriving Canadian companies of the funds needed to make investments in new technologies and achieving carbon neutrality by 2050. It is estimated that between now and then, nearly $1 trillion will need to be invested in the installation of CCUS technologies,(33) and that the global capacity of these installations will need to be multiplied by 140.(34)

According to the Canadian government, the impact on GDP of achieving the 2030 objectives would be minimal: “considerably less than the average annual revision to GDP year over year.”(35) Our analysis demonstrates that this is not the case. In wanting to reduce GHGs by 2030, the federal government must avoid prematurely reducing oil and gas production, as this would not only destabilize the entire economy, but would also threaten the achievement of carbon neutrality by 2050.