Economic Note showing that Canada will be the only country in the world to impose such an inflexible measure, applying not just to transportation, but also to industrial processes

This Economic Note was prepared by Miguel Ouellette, Economist at the MEI. The MEI’s Energy Series aims to examine the economic impact of the development of various energy sources and to challenge the myths and unrealistic proposals related to this important field of activity.

Toward the end of 2016, the federal government announced its intention to consult the provinces in order to develop a new energy policy, namely the Clean Fuel Standard (CFS). Its objective is to reduce greenhouse gas (GHG) emissions all while favouring the use of low-carbon fuels, energy sources, and technologies. The Canadian government has announced that the new standard will be made public in the fall of 2020.

Although the intention behind this energy policy may be laudable, its format will be detrimental to the Canadian economy, and its effect on the environment is far from certain. The Standard is meant to contribute to Canada reducing its GHG emissions to 30% below their 2005 level by 2030.(1) However, Canada would become the only country in the world to include natural gas and propane in such a policy,(2) placing numerous Canadian businesses at a competitive disadvantage. It is often a good thing to lead the parade, but parading all by oneself is a different story.​

In its current form, the CFS will make Canada the only country in the world to impose such an inflexible measure: It will apply to all fossil fuels (liquid, solid, and gas), and so not just to transportation, but also to industrial processes. It will thus require suppliers of fossil fuels to reduce the carbon content of fuels over the course of their life cycles, and therefore to take into account all greenhouse gas emissions associated with their extraction, their production, their distribution, and their use. Companies will have to respect the Standard either through their own efforts or through the purchase of credits from other companies that emit less carbon, which will inevitably increase their production costs.

On top of the very limited ten-year window to bring GHG emissions 30% below the 2005 level, the Standard will not replace federal and provincial environmental policies already in place; it will complement them.(3) Carbon pricing will therefore remain in effect despite this new standard. This regulatory duplication, combined with the inflexible nature of the CFS, will place Canadian companies in many sectors in a precarious position and at a disadvantage internationally, for instance compared to certain American exporters located near the Canadian border. The manufacturing sector in particular will be one of the sectors most affected by the CFS.

The Manufacturing Sector Will Be Hit Hard

In Canada, the manufacturing sector employs around 1.7 million workers and represents more than 10% of the country’s GDP. Every year, manufacturers export goods valued at over $354 billion, which corresponds to 68% of all Canadian goods exported.(4) It goes without saying that this sector is economically important for the country, and that it is very sensitive to its competitive position with regard to foreign exporters.

Knowing that natural gas is the fuel most used by Canadian companies in their manufacturing processes,(5) and that the CFS will apply to this fuel, it is clear that manufacturers will also see their production costs rise.(6) Since numerous companies are involved in the manufacture of a good, there is a snowball effect: The first company in the production chain will pass on a portion of the bill to the second, the second to the third, and so on right up to the final consumer. It should be noted that energy costs for these companies are already among the highest in North America, especially for those located in Ontario.(7)

Those 1.7 million Canadian manufacturing sector jobs could be negatively affected, to varying degrees, by the application of the CFS. It is impossible to say with any reasonable degree of precision at this stage what portion of these jobs would be lost, however, and the various industry associations of the affected companies do not have any such estimates. Yet the implementation of this measure will certainly have a negative impact on the level of employment in Canada’s manufacturing sector by adding an additional layer of costs and constraints. Moreover, the number of jobs potentially affected is even greater if we take into account all the other sectors of the Canadian economy that will also be subjected to the CFS like transport, forestry, oil and gas, mining, and many others.

When a government analyzes the introduction of a new energy policy like this, it has a moral obligation to evaluate its possible adverse effects on workers and businesses. Yet in its brief cost-benefit analysis, the federal government ignored potential job losses in all of these sectors, despite their importance for the Canadian economy, looking only at those that would be created by the transition to so-called green energy. Even without the CFS, the market is increasingly shifting toward these energy sources, and these jobs will be created sooner or later, without automatically impacting manufacturing sector jobs like the CFS will do in its current form.

Transport costs in Canada for these companies will also go up. This is notably due to the direct effect of the CFS on the price of fuels used for transport, but also the addition of a layer of regulation to the Greenhouse Gas Pollution Pricing Act,(8) in effect since 2018. Indeed, manufacturing companies already pay a charge for the pollution related to the transport of goods since the implementation of this law. The introduction of the CFS will therefore heap on additional costs to companies that are already taxed for this pollution.
Moreover, in its own analysis, the federal government mentions that “[I]ncremental compliance costs to regulated parties as a result of the CFS would likely be passed onto fuel end-users (i.e., households and industrial users) to some extent through increased liquid fossil fuel prices.”(9) Consumers and manufacturers will therefore be partly responsible for covering the costs of this new standard.

In addition to its negative economic impact for the manufacturing sector and the Canadian economy in general, the CFS misses the mark when it comes to climate change. Even if this is real and presents a problem to be addressed, energy policies must be judged according to their potential results, not according to the intentions behind them. A major aspect that the CFS seems to omit is the fact that climate change is a global phenomenon, not a national one.

Canada is responsible for just 1.5% of global GHG emissions. In comparison, the United States generates 12.8% of global GHGs, and China, 25.8%. Looking specifically at the manufacturing sector, we observe that Canadian companies have succeeded in reducing their GHG emissions by nearly 40% since 1990. Conversely, during the same period, the United States and China saw theirs increase by more than 34% and 1,080% respectively(10) (see Figure 1). 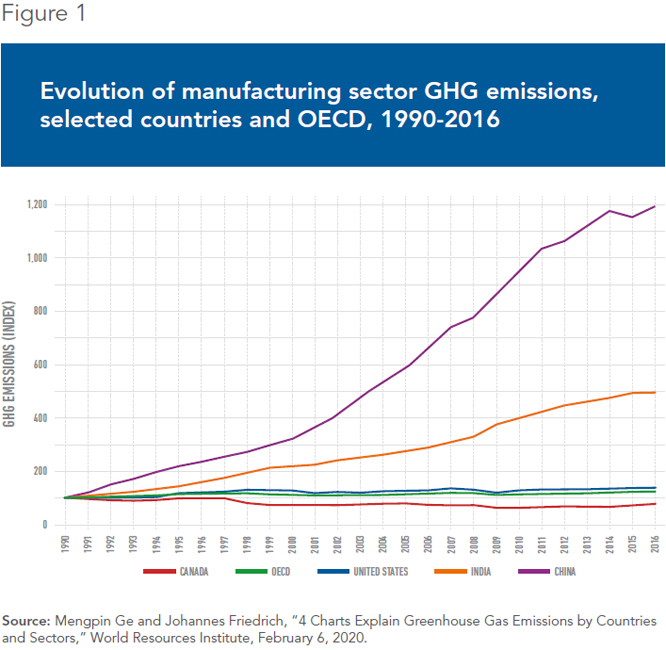 These facts illustrate the Canadian manufacturing sector’s efforts to reduce GHG emissions, and the extent to which the relocation of Canadian companies to regions with fewer restrictions would have a harmful effect on the environment. Thanks to globalization, companies are more mobile than ever. While a regulatory environmental framework is necessary and desirable, the CFS would make countries like China and India more attractive, and we could see carbon leakage: Canada’s emissions would fall, but given the possible relocation of local companies, the net global effect could well be negative.

Furthermore, Canadian companies already use natural gas, a cleaner fossil fuel than the coal that is most widely used by American and Chinese factories. Indeed, burning natural gas emits just over half as much CO2 as burning coal.(11) Canada is already a leader compared to numerous exporting countries, and Canadian manufacturing companies are responsible for more than 30% of the country’s spending on research and development.(12) The relocation of activities would encourage a return to coal and other fossil fuels that are not as clean.

A Sure Competitive Disadvantage

For several years, Canada’s competitive advantage has suffered compared to other countries. While it was ranked the ninth most competitive country in 2010, it has now fallen to fourteenth place.(13) Regulatory measures out of step with the economically interconnected world in which we live are partly to blame.

Unfortunately, the manufacturing sector has not been spared. While it remains a key economic sector, employment has fallen by around 23% since the year 2000.(14) While some of this change may be due to the natural evolution of the labour market, some of it is not. Inflexible policies like the CFS undermine the international competitiveness of Canadian companies, impacting not just firms themselves, but also the human beings who work for them. As shown in Figure 2, the Canadian manufacturing sector has regressed in comparison with its international rivals over the past 20 years. Throwing another obstacle in its path will only make things worse. 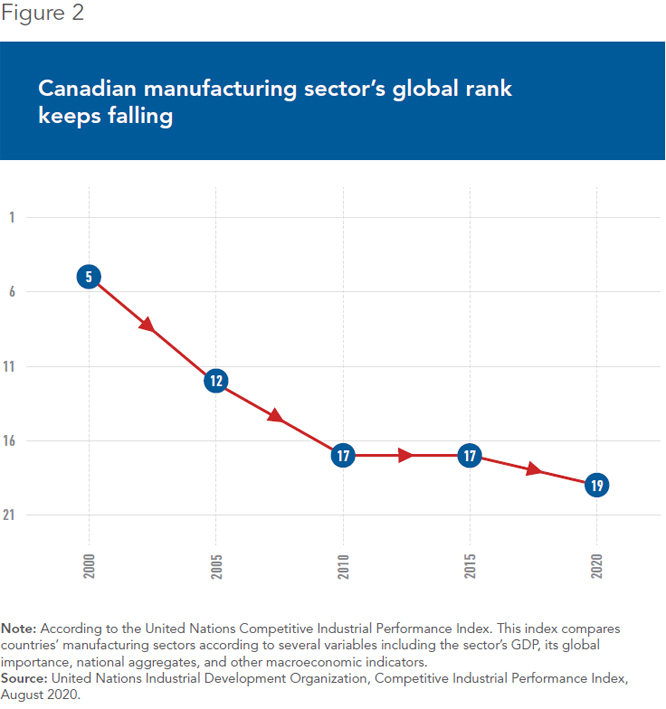 Moreover, the federal government’s “Business and industry” web page states that “[i]n a highly competitive global environment, the Government plays a role to promote fair competition for Canadian firms seeking to grow abroad and ensures that the Canadian market remains open and competitive.”(15) Logically, the CFS should take this mission into account, coming as it does from the same level of government.

While climate change is a real issue, and Canada has the ability to be a leader in environmental matters, proposed energy policies must be properly evaluated. In a world where international competition is ubiquitous, the federal government should ensure that the regulatory framework is effective and beneficial for Canadians.

The CFS misses the mark both economically and ecologically. As emphasized by economist William Nordhaus, co-recipient of the 2018 Nobel Prize in Economics, international cooperation is essential in the fight against climate change. Canada should not be going it alone, especially given its minimal impact on global GHG emissions. The government should instead have a greater appreciation of the interconnectedness of countries in the face of this global challenge.

Moreover, the current COVID-19 situation adds a number of obstacles to the Canadian economy and international trade. The federal government should encourage economic recovery by being more flexible, not by making the current regulatory framework more restrictive. The CFS will be an extra hurdle for Canadian companies struggling to emerge from the pandemic.

We should instead favour energy policies that will have a clear positive impact on the environment and that will not put the Canadian economy in hot water. The fight against climate change will happen through international cooperation and the efforts of individuals. If Canada wants to be the world leader when it comes the environment, the CFS is certainly not an appropriate solution, and it should be reconsidered.