The COVID-19 pandemic has shown us once again the importance of quickly developing and approving the use of innovative drugs. This publication has two recommendations to help ensure that Canadians have quicker access to medications.

This Economic Note was prepared by Maria Lily Shaw, Economist at the MEI, and Krystle Wittevrongel, Public Policy Analyst at the MEI. The MEI’s Regulation Series aims to examine the often unintended consequences for individuals and businesses of various laws and rules, in contrast with their stated goals.

Over the past year, the pharmaceutical industry swiftly developed a number of COVID-19 vaccines which are now being administered around the world. Though pharmaceutical companies certainly deserve our praise, we must also recognize the role played by the Canadian government and its health authorities in approving the use of these vaccines in record time. A regulatory process that usually takes upward of ten months was completed in under three. This was made possible, in part, through an Interim Order issued by the Minister of Health authorizing Health Canada to use a method called “rolling submissions” in the review process.

The vaccines, and their rapid approval, will prevent thousands of Canadian deaths, revive billions of dollars in economic activity, let grandparents see grandchildren, and finally bring an end to a year that has been extremely disruptive to all, and devastating to many. In the past, though, Health Canada’s sluggish review process has resulted in considerable delays in being able to access life-saving drugs and medical devices. As we now know that there are ways to improve the efficiency of the process while safeguarding the quality, efficacy, and safety of new drugs entering the market, it is imperative that we make these improvements permanent and adopt them across the board.

The Many Benefits of Pharmaceutical Innovation

Beyond these clear health benefits, the pharmaceutical sector generates between $19 billion and $26 billion of added value for the Canadian economy.(4) The pharmaceutical manufacturing sector alone supports some 31,000 jobs, and over the past five years employment has grown by 15%.(5) Perhaps even more importantly, new drugs also have the potential of improving the efficiency and the sustainability of the health care system. By improving patient health, the introduction of new drugs often leads to decreased use of other health care resources, such as hospitalizations and medical visits.

It is estimated that in Canada, each additional dollar allocated to drug spending yields an average reduction of $1.50 in hospital expenditure, without negatively affecting the health of the population.(6) If drug spending were to increase by just 5% in Canada, it would generate savings of approximately $3 billion in hospital expenditure.(7) What’s more, pharmaceutical innovation can improve a patient’s ability to work, which can directly translate into a lower degree of absenteeism in the labour market.(8) Thus, new medicines contribute to the economic prosperity of a country by increasing its labour supply, the number of hours worked per person, and average productivity per hour.

The benefits we reap from pharmaceutical advances are indisputable. However, there are significant delays in the regulatory review process that not only unnecessarily prolong its length, but may even discourage the submission of new drugs to Health Canada, thus preventing patients from receiving beneficial medicines.

The submission of a new drug to Health Canada for approval is an important step in the multi-year drug development process. This approval process is crucial for the well-being of Canadians, as it determines the safety, efficacy, and quality of the medicine. As drug development and approval takes between eight and fifteen years per drug,(9) the review time associated with submission and approval may seem like merely a drop in the bucket. However, any improvement in review efficiency results in life-saving drugs getting into the hands of Canadians that much sooner, while also potentially reducing systemwide medical expenditures.

Before any new medication or vaccine is submitted for review to Health Canada, the product undergoes initial research and development and three phases of clinical trials which themselves require application, monitoring, and approval either in Canada or elsewhere.(10) It is only once the pharmaceutical companies have gathered all information pertaining to their new medication and assembled a complete application containing their findings that a “New Drug Submission” may be filed with Health Canada, either under the standard review process, or one of the two expedited review pathways (see Figure 1).(11) It should be noted that whether a drug is submitted under the standard or expedited process, it is subject to the same stringent conditions during and following authorization. 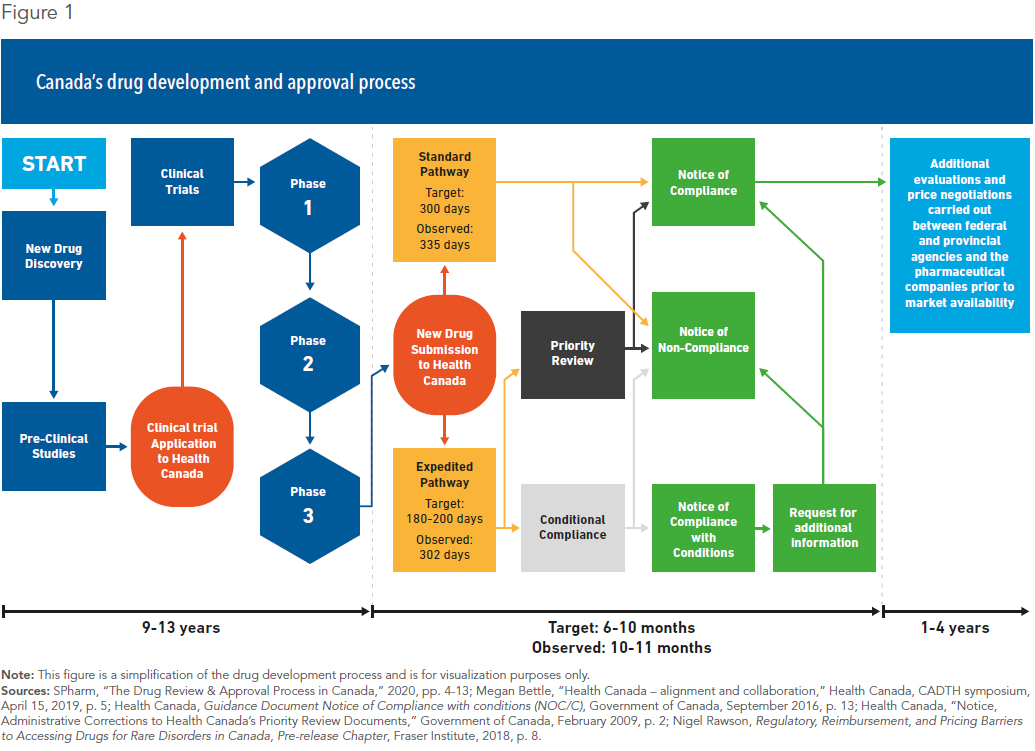 If submitted under the standard process, Health Canada has a target timeline of 300 days to provide a response to the pharmaceutical company.(12) However, this target is not always met in practice. Of all new drug submissions filed between 2015 and 2019, only 33% received a response within the target (see Figure 2). In fact, 18% took more than a year to review, and nearly 5% took over two years.(13) On average, the standard review process lasted 335 days. 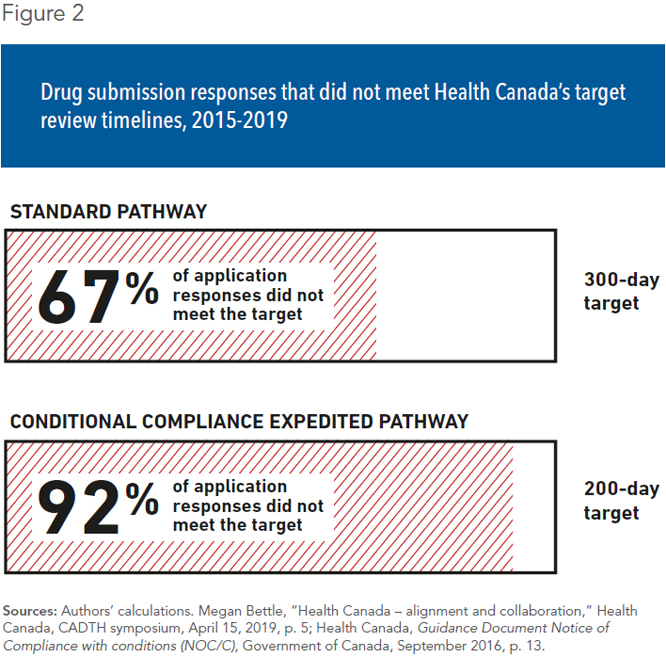 In an effort to ensure that promising therapies for life-threatening or debilitating illnesses reach Canadians in a timely manner, Health Canada has developed two expedited pathways for approving new drugs. The first of these is the conditional compliance pathway, for which Health Canada reduces the target timeline to 200 days.(14) Between 2015 and 2019, though, the average delay before approval of a new drug submission under conditional compliance was 302 days, with only 8% of applicants receiving a response within the target.(15)

For the second expedited pathway, namely priority reviews, Health Canada commits to a 180-day review period.(16) Historical data is not publicly available for this expedited path, but according to our calculations, as of June 1st, 2021, of all the new drug submissions currently undergoing priority review, 56% had exceeded the target timeline.(17)

How Does Canada Compare?

Canadian patients often wait longer before obtaining access to new medicines than patients in other places, such as the United States or Europe. The outstanding delays in Health Canada’s regulatory process described above are one reason for this, as the United States Food and Drug Administration (FDA) and the European Medicines Agency (EMA) have shorter processing times for both expedited and standard reviews. Between 2002 and 2016, median approval-processing times for expedited reviews in Canada were over one month longer than in Europe, and three months longer than in the United States. For the standard review, over the same period, the FDA and EMA median processing times were up to 46 days shorter than Health Canada’s.(18)

In addition to this, new drug submissions are filed with Health Canada an estimated three to eighteen months after first being submitted to either the FDA or EMA.(19) As a consequence, drugs are approved in Canada one to four years later than their first approval by either the FDA or EMA.(20) In fact, due to the lack of a comprehensive partnership with foreign regulatory authorities, of the 58 new medicine submissions deposited to Health Canada in 2019, nine of them had already been approved by the FDA up to two years prior to their submission in Canada. Despite this prior FDA approval, Health Canada’s processing time for those nine applications still averaged 247 days.(21)

Although many influences can explain the differences in processing times and submission delays between Health Canada and the FDA, one of the main factors is the conditions that must be met for an application to be admissible. In a number of its expedited programs for serious conditions, the FDA offers expedited pathways that enable not only early submission of new drugs, but also a faster review process.(22) By providing an option to submit what are essentially incomplete applications and update the information as it becomes available, the process can be drastically shortened. Even under the expedited review process, this method, known as a “rolling submission” or “rolling review,” had never been used in Canada, until the COVID‑19 pandemic.

Rolling Submissions Have Proven Their Value

Canada’s response to the COVID-19 pandemic provides a unique opportunity to observe the efficacy of rolling submissions. Adopted by Health Canada in September 2020, this method accelerated the review process for new medicines and vaccines that treat COVID-19 by evaluating the information initially submitted by the applicants while also accepting new evidence as it became available.(23) The Minister of Health’s Interim Order, therefore, facilitated earlier access to COVID-19 vaccines by introducing more agile application and administrative requirements than what is currently offered in the existing regulatory pathway, while maintaining appropriate standards of safety, efficacy, and quality. However, without renewing the Interim Order, rolling submissions will no longer be permitted as of September 2021.(24)

In practice, the results have been very positive. For instance, both Pfizer and Moderna submitted their respective COVID-19 vaccines to Health Canada through the rolling submissions pathway, and each received a response within three months.(25) Moreover, as of June 1st, 2021, the average COVID-19 drug approval delay was 63 days, over 80% faster than the average processing time of 335 days observed between 2015 and 2019 in the standard review process, and 79% quicker than the average 302 days in the conditional compliance expedited review stream.(26) The use of rolling submissions has thus taught us that the medical community can still maintain the highest scientific and safety standards, while also acting expeditiously.

If rolling submissions had been an option prior to the pandemic, for both the standard and expedited review pathways, a far greater number of drugs would have been made available to the public within a more reasonable timeframe. For instance, if the improvement in performance detected with rolling submissions(27) had affected all new drug applications submitted to Health Canada between 2015 and 2019 under the standard process, 82% of them would have received a response within the target timeline of 300 days, up from only 33%. As for the conditional compliance expedited review pathway, the target timeline of 200 days would have been met for 58% of the new drug submissions between 2015 and 2019, up from just 8% (see Figure 3). 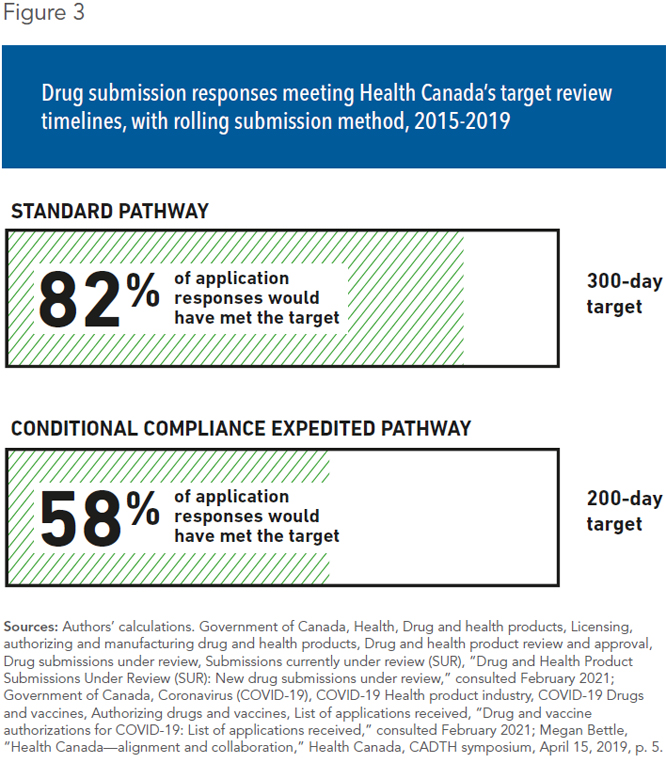 ​Of course, there are additional factors that may have contributed to Health Canada’s improved performance during the pandemic. However, the importance of rolling submissions in the review process should not be underestimated, and maintaining the use of this method in the future would generate considerable benefits.

Indeed, reducing approval delays would not only bring new medicines to market sooner, but can make a significant difference in the total cost of developing a new drug. For instance, it is estimated(28) that a reduction of 30% in the regulatory review processing time would reduce the total capitalized cost of developing a drug(29) by nearly 5%. Concretely, 4% of these savings would be reinvested into research and development,(30) leading to additional health benefits for Canadian families.

Since 2017, Health Canada has held consultations with key stakeholders in order to improve the regulatory review of drugs and medical devices. Its objective is to make the process more efficient and improve timely access to therapeutic products.(31) In order to improve its performance, we suggest health authorities adopt the following two recommendations:

The pandemic has had serious consequences for health care systems across Canada. Concrete measures and public policies that enable Health Canada to improve its efficiency will ultimately give Canadians speedier access to new and improved drugs and medical devices. When we know better, we should do better, which in this case means narrowing the review window by making the use of rolling submissions permanent and by introducing expedited authorization for new drugs that have already been approved by a foreign regulatory agency. After all, it is in the interest of all Canadians to be able to count on a regulatory framework that innovates and adapts alongside the industry it oversees.