Economic Note on how the province could have managed the pandemic differently, and on the need for systemic reform of Canada’s health systems

Nearly one year ago, the Quebec government decreed a temporary end to the transfer of COVID-19 patients to CHSLDs, Quebec’s long-term care centres. To this day, Quebec’s extremely high death count among seniors in CHSLDs continues to raise eyebrows. This publication from the Montreal Economic Institute calls into question the inevitability of these deaths.

This Economic Note was prepared by Peter St. Onge, Senior Fellow at the MEI, in collaboration with Maria Lily Shaw, Economist at the MEI. The MEI’s Health Policy Series aims to examine the extent to which freedom of choice and entrepreneurship lead to improvements in the quality and efficiency of health care services for all patients.

Quebecers have suffered a terrible toll from the COVID-19 pandemic, by far the worst in Canada. The province has now registered over 10,000 deaths, leaving Quebec with one of the highest death rates in the world.(1) One key reason for this was Quebec’s health authorities emptying chronically overcrowded hospitals into chronically understaffed senior centres. In effect, during the pandemic, these two overwhelmed yet critical systems crashed into each other, leaving Quebec seniors to die en masse. How could the province have managed the situation differently to prevent this catastrophe?​

Looked at the other way around, had the rest of Canada suffered the same ratio of LTC deaths as Quebec, an additional 7,500 seniors would have lost their lives.(6) 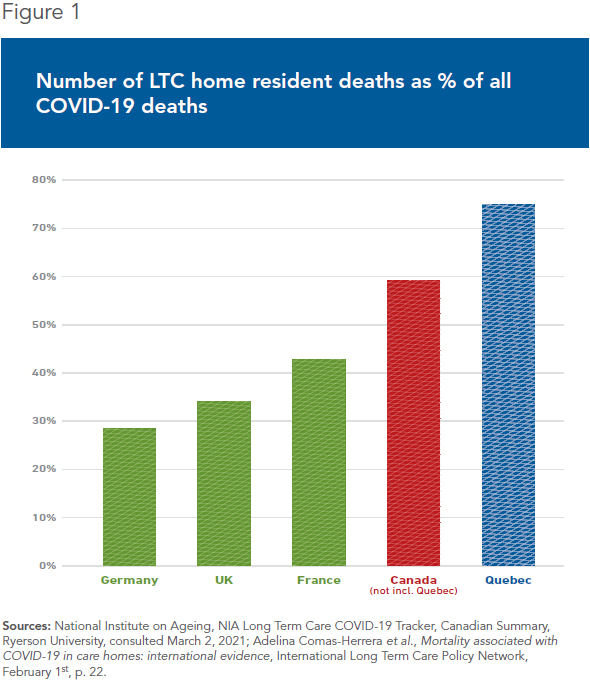 It bears noting that these estimates are in addition to deaths caused by treatment delays during COVID‑19 for other conditions such as cancer or heart disease.(7) For instance, one recent British study estimated a 20% rise in cancer deaths from delayed treatment due to COVID-19 capacity constraints.(8) Given that Canadians suffer approximately 85,000 cancer deaths per year,(9) that would equate to nearly 17,000 additional cancer deaths in Canada.

Naturally, we must include not only cancer but the many other chronic conditions requiring timely treatment and intervention, from heart conditions to diabetes, Alzheimer’s disease, and stroke. Furthermore, the UK has substantially more baseline hospital capacity than Canada, averaging 50% more hospital discharges per capita,(10) meaning that such delay-related deaths may actually be substantially more prevalent in Canada.

Where Did Quebec Go So Wrong?

An exhaustive survey conducted by the Canadian Institute for Health Information (CIHI) found that countries that minimized LTC sector death ratios instituted within the centres a combination of isolation wards, infection control training and audit, rapid response control teams, surge staffing, and widespread testing for infection.(11) These interventions are all labour-intensive, perhaps explaining why understaffed homes in Quebec and the rest of Canada, according to the CIHI report, systematically did none of them.

Beyond direct staffing, during the pandemic there were innovations in these peer countries such as having LTC staff live on-site(12) and intentionally decentralizing decision-making to individual centres.(13) Yet the most striking difference with these peer countries is the high number of Canadian and especially Quebec seniors who live in group settings rather than living at home. According to one Oxford cross-country study,(14) fewer than 2% of seniors in Italy lived in nursing homes, while in the UK, approximately 3.5% lived either in nursing homes or hospitals. In contrast, according to CIHI, 7% of seniors across Canada live in formal LTC facilities, with the number rising to 9.5% in Quebec, the highest of all the provinces.(15)

This enormous disparity means that a higher proportion of seniors were put at risk by Quebec not following best practices on safety and training, protective equipment, visitation, and resource management. In essence, this large population of vulnerable seniors became “dry tinder” amidst Quebec’s long-standing shortages and understaffing in both health care and senior care, making a catastrophe perhaps inevitable.

In fact, for decades before COVID-19, Quebec had already suffered a dangerous combination of longer-than-recommended delays for essential surgeries(16) and senior centres so understaffed that residents eat food gone cold.(17) These facts are particularly striking for a province that spends so much on its public health system.(18)

Even when considering the Canadian system as a whole, the wait times to see a doctor or specialist seem to only be getting worse. The average wait time for a consultation with a specialist rose 136% between 1993 and 2018.(19) Moreover, a 2017 CIHI survey consistently ranked Canada’s system among the worst out of eleven universal systems. For instance, 29% of Canadians report waiting four or more hours during their last emergency room visit, compared to between 1% and 20% in peer countries. When looking at Quebec’s system, that number climbs to 51%.(20)

Indeed, Quebec’s hospital shortages and outstanding wait times are a problem that has been neglected for decades. The Quebec media has long reported the tragic consequences of these issues, such as an 86-year-old Montreal woman who died after laying on a gurney in a hospital hallway for four days,(21) or a dozen cardiac patients who died in 2019 while waiting for surgery.(22) The ongoing tragedy hit home again in early 2021 when rising Quebec actress Rosine Chouinard-Chauveau died at 28 while on a waitlist for critical surgery.(23)

Because of this ongoing lack of capacity, after an initial period early in the pandemic when patients avoided emergency rooms out of fear of catching COVID-19, by late May 2020 many had either overcome their fear or just could not wait any longer, and almost half of emergency rooms in Montreal were at or over capacity.(24) Even at the worst of Quebec’s COVID-19 crisis in early May, while some hospitals in other countries were nearly empty,(25) Montreal hospitals were so crowded that they had to send patients to Trois-Rivières, over 100km away.(26)

It was predictable that Quebec’s constantly packed ERs, combined with the magnitude and speed of the pandemic, left little alternative to that fateful decision to empty hospitals. Unfortunately, in order to free up capacity for the expected rush of COVID-19 patients, even the frailest hospital residents were emptied en masse into senior centres. Those centres were already overwhelmed by their pandemic preparations amid staff shortages(27) and lack of even elementary protective and infection-prevention equipment and training,(28) which was scarce even at the hospitals from which these patients were expelled.(29)

Among those mass-expelled from hospitals were long-term patients, who typically might occupy one in five hospital beds(30) and who can be extremely frail and thus most susceptible to COVID‑19. This sudden influx of extremely labour- and resource-intensive patients forced the most vulnerable people in Canada into exactly those settings where the virus was spreading like wildfire.

Finally, in this tragic sequence set off by the impulse to protect hospital capacity, Quebec restricted the transfer of sick residents back from senior centres to hospitals, trapping them in those same overburdened senior care centres least able to treat them or even simply isolate them and keep them from infecting other elderly residents. As one Montreal pediatrician summarized, Quebec “unwittingly engineered a situation in which facilities could harbour the virus and trap its victims inside to get sick and die.”(31) This policy ultimately backfired, worsening the original capacity problem as the rapid spread of COVID-19 in senior centres sent large numbers of newly infected seniors into that same hospital system anyway.(32)

It’s Not About the Money

How to fix Canada’s overloaded hospitals and understaffed senior centres? A commonly proposed solution is more money, with critics accusing politicians of proffering “austerity” budgets.(33) The truth is that governments across Canada have for decades now massively increased health care spending (see Figure 2), far faster than population or economic growth. In 2019, this spending rose at a rate of 4.3%, four times faster than the population.(34) Indeed, far from austerity, the Canadian health care system is today among the most expensive universal systems on earth, spending nearly 30% more than the OECD average.(35) 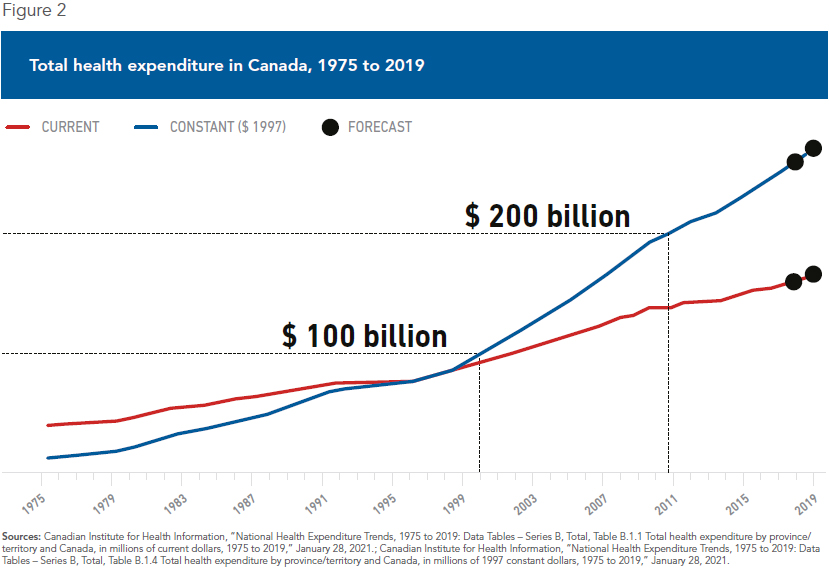 Meanwhile, public spending on long-term care has also been rising for decades across all age groups. In fact, it is rising fastest for the youngest seniors, those aged 65 to 69, who are typically the most independent and, therefore, the least costly.(37) Finally, Canada’s LTC expenditures are also among the highest of all rich countries. One study evaluating nineteen industrialized countries found that even after controlling for number of beneficiaries, Canada’s public expenditure on LTC institutions as a percentage of GDP was higher than all but two rich countries.(38)

From health care to senior care, this consistent failure to translate generous budgets into even acceptable results suggests that what is needed is systemic reform on a deeper level. The MEI last year published a research paper(39) focusing on four such structural reforms for health care: more flexible decision-making and resource allocation; funding that follows the patient; expanded use of existing resources like nurses, pharmacists, and telemedicine; and a reduction in barriers to the entrepreneurial provision of new capacity. Similar principles can be applied to senior care, making resource allocation and decision-making more flexible and responsive to seniors, while removing barriers to innovative formats that might serve seniors better and make the system more resilient to crises. Recent academic scholarship(40) suggests that such reforms can improve service in Quebec while actually reducing costs, by trimming the enormous waste in our current senior care system.

Amid the challenges of the pandemic, Canada’s policy-makers, administrators, and front-line personnel have done their best, often at great personal risk and sacrifice. Nobody should doubt that every single person involved in Canada’s health care systems and senior care systems genuinely cares for, and wants to help, the people served by those institutions.

It’s not a matter of pointing fingers or assigning blame; rather, the task is repairing structural problems in Canada’s care services that have for decades prevented increased resources from reaching those in genuine need. Those services have turned out to be far too frail in the face of the monumental challenge of COVID-19. We need to be prepared for the next serious challenge that may strike, to be sure, but above all to provide, year after year, the humane and attentive care that all Canadians have a right to expect.