The return to a balanced budget in the medium term is necessary, and it must be achieved by controlling governmental expenditures. One way to do this is to set up a standing expenditure review committee, as the federal government did following the financial crisis of 2008-2009, shows this publication.

This Viewpoint was prepared by Miguel Ouellette, Director of Operations and Economist at the MEI. The MEI’s Taxation Series aims to shine a light on the fiscal policies of governments and to study their effect on economic growth and the standard of living of citizens.

In recent months, the various levels of government have had to spend astronomical sums of money. The Quebec government is no exception, with its projected deficit for the current fiscal year reaching a historic high of $15 billion.(1) While this deficit can be explained by the need to adopt measures to deal with the effects of the pandemic on the economy and on Quebec society, it needs to be reabsorbed as soon as possible. Continuing to pile up debt at such a rhythm after the pandemic could compromise the health of our public finances and shift a heavy burden onto the shoulders of subsequent generations.​

When government lives within its means, it guarantees the sustainability of taxpayer-funded public services. The zero-deficit target gives the government guidelines when evaluating a potential new expenditure: If this limit did not exist, no spending would seem superfluous. The clear direction provided by the zero-deficit goal also tends to create a feeling of confidence in the business community, which helps attract and secure private investments, thus stimulating the economic growth Quebec needs.

Thankfully, the current provincial government has expressed its desire to return to a balanced budget in five years, as required by the Act to reduce the debt.(2) Thanks to its prudent management of public finances before the pandemic, Quebec is in a position to return to a sound budget balance without having to resort to austerity measures.

The structural deficit that needs to be erased to return to budgetary balance (which is to say, the deficit that would exist regardless of the impact of economic circumstances on the public finance situation) is much lower than the total deficit, and is between $5.5 billion and $7.0 billion.(3) In other words, when growth slows temporarily, less is collected in taxes and expenditures tend to rise, and so the overall deficit increases without necessarily eroding the country’s financial situation in a structural manner. When the structural deficit climbs, though, there is a permanent shortfall that must be addressed, as there is currently, since there then exists an enduring tendency for revenues to be lower than expenditures if nothing is done.

Once the importance of returning to a balanced budget has been established, it must be determined which option should be chosen to achieve this: Should expenditures be controlled, or should taxes be raised?

The income tax burden of Quebec taxpayers is already higher than that of all other Canadian provinces except Nova Scotia.(4) If we take into account total tax revenues collected by all levels of government, Quebec takes the title as the province with the highest tax burden (38.9%) in Canada(5) (see Figure 1). And compared to the members of the OECD, Quebec’s burden is higher than that of 27 out of 37 countries.(6) Increasing the tax burden in Quebec would further undermine the province’s competitiveness and could slow down the economic growth than we need to maintain and improve our standard of living. 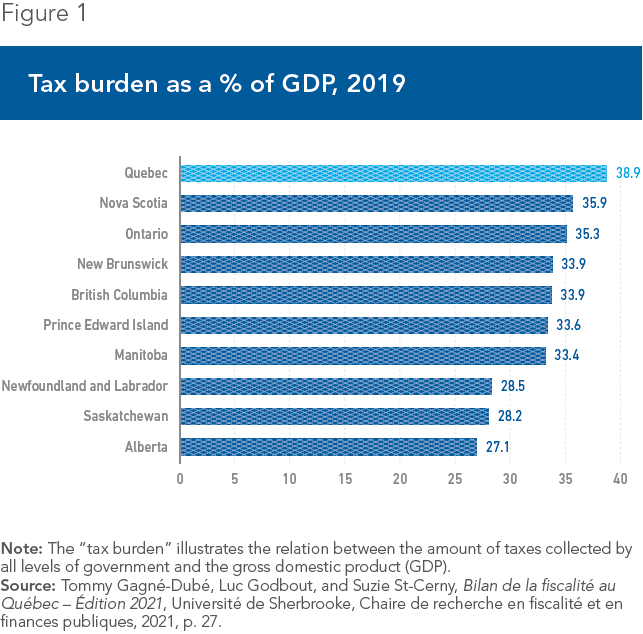 In terms of expenditures, Quebec is among the Canadian provinces with the highest level of program spending, corresponding to 22.2% of its GDP in 2018-2019, compared to the Canadian average of 18.6%.(7)

While these data are from before the pandemic, one thing is clear: Quebec taxes and spends far more than the Canadian average. Yet there is no indication that the services provided by the Quebec government are of such high quality as to justify spending more than the other provinces.

For example, the graduation rate of Quebec high school students after seven years is the lowest in Canada,(8) while spending per student has not stopped rising over the years.(9) It is certainly possible to imagine that Quebec government spending is sometimes poorly prioritized or allocated inefficiently. The return to a balanced budget must therefore be accomplished through spending control.

As Quebec tries to rebalance the budget, it should take a page from the deficit reduction plan adopted by the federal government under Stephen Harper in the wake of the 2008-2009 global economic crisis.(10)

A committee steered by the Treasury Board was put in place at the time with a clear target for spending reductions: Each department had to present its proposals aiming to identify savings of 5% to 10% to include in the following annual budget.(11) This committee therefore entrusted the different departments to increase the efficiency of their programs, which led to better performance per dollar spent. Moreover, by establishing a savings target for each department or agency to hit, it became easier to compare and evaluate the merit of each of the proposals.

In the end, this committee generated recurring savings of over $5 billion and contributed significantly to the government’s ability to balance the budget.(12) Moreover, 70% of these savings came from reductions in operational expenditures, not from programs and services themselves.(13)

Indeed, in the context of such an exercise, it is often preferable to first target savings that can be found in administrative procedures rather than in reducing the services provided to citizens. Obviously, the temporary aid measures introduced during the pandemic will also have to be abolished once they are no longer necessary.

The past year has been difficult both for Quebecers and for Quebec businesses, and the provincial government’s record budget deficit was inevitable. In order to ensure our longer-term economic health, however, a standing expenditure review committee needs to be put in place so that Quebec can return to a balanced budget as soon as it can.