The economic catastrophe due in large part to physical distancing measures has led the various levels of government to implement relief measures. This MEI publication provides a critical look at the relief measures currently in effect all while identifying the principles that should guide government action. The researchers notably observe that measures aiming to preserve employment links, like wage subsidies, are the most conducive to rapid economic recovery.

This Economic Note was prepared by Peter St. Onge, Senior Fellow at the MEI, with the collaboration of Gaël Campan, Senior Economist at the MEI. The MEI’s Taxation Series aims to shine a light on the fiscal policies of governments and to study their effect on economic growth and the standard of living of citizens.

During a crisis, the actions governments take can either reduce harm or magnify it. Crises can be used to liberalize, or they can lead to further restrictions on peaceful activity, with lasting damage to the economy and society, for instance when used to push unrelated agendas like climate change. Political responses will determine whether those affected are helped quickly while freeing the economy for future growth, or whether the fallout lasts for generations.

This paper details three principles that should guide public action, followed by a discussion of current Canadian relief policy in response to the COVID-19 crisis. ​

PRINCIPLE 1: Government Should Prioritize Tasks Only It Can Do

Before taking on new responsibilities, the government should first ensure it is handling its existing tasks. For the COVID-19 crisis, this means ensuring sufficient capacity for mass testing, quarantine or contact tracing, screening travellers while repatriating Canadians stranded overseas, and potentially stockpiling essential medical equipment.

It is equally important for government to proactively get out of the way when appropriate. Unnecessary restrictions—whether on what nurses and pharmacists are allowed to do, or on doctors in the private sector working some hours in the public sector—limit the number of medical professionals available to shoulder the burden in times of crisis. Government should also remove unnecessary rules that slow new drug development, including vaccines, and hobble private-sector efforts to provide needed medical supplies or to import medical products already approved and being used in other developed countries.(1)

In the current crisis, there have been a handful of emergency deregulations across these areas, but an estimated 75,000 federal regulations remain on the books, with another 310,000 spread across the provinces.(2) In many cases, these regulations may be so outdated that the original industry has disappeared. Even a good-faith bureaucrat simply cannot predict every potential regulatory glitch in a crisis;(3) to ensure that we come out of this crisis faster and are better prepared for the next one, such regulations should be temporarily suspended to fast-track relief now, and later revisited for possible repeal.

PRINCIPLE 2: Relief Should Be Targeted to the Crisis

Political observers have long noted that crises expand the scope and powers of government.(4) This tendency is more acute today because governments have, over the past century, largely monopolized traditional “safety net” activities once carried out by churches and voluntary co-operatives.(5) This means that in a severe crisis, government relief is inevitable. When millions are out of work and thousands of businesses are closing, people want something to be done.

Yet government resources are limited, so relief must be targeted to the greatest need. In the current crisis, beyond emergency health requirements, the most serious impact on Canadians is widespread job losses (see Table 1). Well-targeted measures might include, in order of least disruption: tax holidays for employers and workers, expanded unemployment benefits, wage subsidies, and subsidized loans to businesses lacking access to capital or hit particularly hard by the crisis.

In contrast, poorly targeted handouts should be avoided, because recipients who do not absolutely need the money tend to simply save it, damaging public finances for little immediate gain.(6) Furthermore, in an environment of deficits,(7) poorly targeted handouts exhaust government’s ability to aid the economy. In the case of work-discouraging benefits, they can actually make unemployment and recession worse. This is already happening in the present crisis, as many workers refuse even the jobs on offer, since public benefits pay more.(8)

Targeting relief to the crisis allows governments to act as responsible custodians of taxpayer funds. Of course, every crisis will affect industries differently. The current COVID-19 crisis disproportionately hurts restaurants, the hospitality sector, and airlines, all decimated by physical distancing edicts.(9) Although historically, the MEI has opposed public aid to business, when governments force them to shut down, it makes sense that employers and their employees should be indemnified. Meanwhile, the oil industry is suffering from the twin shocks of falling demand from COVID-19’s economic fallout, together with a Russia-Saudi spat that has overseas supplies flooding markets.(10) Both the airline and the oil and gas industries have long been hurt by government restrictions in Canada, and now face existential crises.(11)

Protecting taxpayers may involve governments receiving ownership shares, not just loan notes. Because long and painful experience has shown that bureaucrats have little managerial expertise to contribute,(12) government should not participate in management decisions after relief is granted. Preferred shares, for example, can ensure that taxpayers receive their return while management continues making critical decisions. Grants or loans may, for political reasons, contain provisions limiting executive bonuses, limiting share buy-backs, or no-layoff clauses, but beyond such conditions, governments should tread lightly.

PRINCIPLE 3: Relief Should Minimize Both Short- and Long-Term Harm

In economics, the future is a lot bigger than the present. A 1% permanent change in growth is the difference between your grandchildren living in a country resembling Canada or one resembling Turkey or Bulgaria.(13) Meanwhile, long-term studies show that every dollar in raised government spending destroys two to three dollars in economic growth.(14) This suggests that special care should be taken to avoid permanent increases in spending.

The longer relief continues, the more the labour and business environments will be distorted, creating unintended consequences called “moral hazard.”(15) For example, subsidizing business loans as a short-term contingency can help a company survive a shock, but long-term subsidies encourage businesses to stop saving altogether, waiting on future bailouts instead.

Every element of relief, therefore, needs a fixed end date. Particular care should be taken with general budget funds, which tend to reset baselines and perpetuate themselves. For example, after the 2008 financial crisis, US President Bush raised spending by $1 trillion as a one-off event, yet that baseline stuck into the next administration.(16) When possible, therefore, emergency spending should be passed in a standalone bill that requires reauthorization.

It is important for relief to avoid economic disruption that may take a long time to heal. Such a “least restrictive means” principle is already widely accepted for regulation,(17) and should be used for relief programs as well. This implies that relief be given on a non-discriminatory basis among those affected by the crisis, not used to pick winners and losers. After all, bureaucrats have little skill in assessing investment opportunities, and discriminatory bailouts risk going to ailing companies merely because of their past incompetence.

For example, in the wake of the 2008 financial crisis, federal aid went to certain car manufacturers, out of proportion to the extent to which they were impacted by the crisis, ultimately leading to a $3.7‑billion loss to taxpayers.(18) In contrast, in the wake of the 9/11 attacks, the US bailed out the airline industry, which was directly impacted by fears of terrorists on airplanes, and the aid ultimately turned a $300‑million profit for taxpayers.(19)

When possible, direct aid should be preferred over mandates that can lead to unintended consequences. For example, mandating that all companies keep paying workers would quickly wipe out small businesses, whereas direct aid allows them to remain afloat. Existing programs and existing relationships should also be preferred. These entail fewer disruptions, faster adaptation, and fewer misaligned incentives. For example, wage subsidies leave businesses intact and workers in place, setting the stage for quick recovery.

Finally, any business that can safely remain open should be allowed to do so. It is important to remember that non-essential goods subsidize the costs of providing essential goods; the revenue a pharmacy makes from selling chocolates or cosmetics helps pay the bills so it can keep selling critical medicines. Meanwhile, seemingly non-essential goods can be critical inputs. Truck drivers delivering medicine, after all, need gas stations, take-out food, and rest stops big enough to handle a rig. A nurse or doctor needs childcare services. Financial markets are essential to keeping hospitals functioning. Blanket bans risk an endless cascade of nasty surprises as links in supply chains fail one by one, disrupting even access to the most critical goods and services.

So far during the COVID-19 crisis, Canada’s response, while not perfect, has been better than many feared. Still, early shortages in testing, tracing, and ICU beds may have been resolved faster if not for the virtual ban on private clinics and providers. Emergency funding to expand capacity was quickly earmarked, but capacity obviously takes time to build. Meanwhile, we have seen only very limited deregulation to make better use of existing medical staff and in medical product manufacturing, and little effort to improve the general business climate for small business.

In terms of relief, Canada has done well to target funds to the unemployed and workers, helping preserve jobs via wage subsidies. Subsidized loans have been offered on a relatively targeted and non-discriminatory basis, with repayment conditions.(20) The main areas of improvement are clearing barriers to entrepreneurial health care capacity and easing access to medical equipment and treatments. Removing burdens on smaller businesses, especially tax and regulatory burdens, would help them while actually growing the economy (see Figure 1). And ultimately, a concrete plan for reopening the economy based on objective criteria is needed as soon as possible. 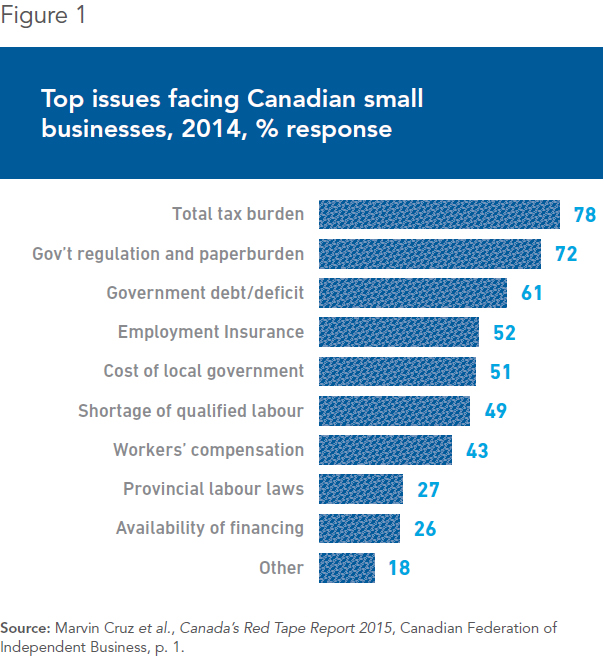 Still, Canada’s response has been better than that of its southern neighbour, which spent a large proportion of relief money simply mailing checks to everybody, rich and poor alike, while deregulating only piecemeal and reluctantly.(21)

It is important to remember that there are opportunities for growth in a crisis. If temporary programs have a way of outliving the crisis, this is also true of improvements—a tax or mandate, temporarily repealed, may well stay repealed. For example, taxpayers could get used to tax cuts, while temporarily removing trade restrictions, especially on interprovincial trade,(22) could remind Canadians what we give up to those restrictions in the first place.

A crisis is every leader’s moment in history, and history will judge them by the long-term effects of their decisions, not by fleeting pressures. Leaders who competently navigate the crisis while minimizing the damage to future generations will be remembered long after the crisis has passed.