Economic Note showing that to make the most of the economic opportunity AI represents, several important structural reforms should be undertaken

Are machines going to steal our jobs? That is the question that keeps popping up in light of the rapid progress of artificial intelligence (AI). Research shows, however, that such fears about the adverse impact of AI on employment are largely exaggerated.

Despite making for eye-catching headlines, research shows that such fears about the adverse impact of AI on employment are largely exaggerated.(1) This does not mean we should disregard the plight of affected workers, though. Proactive measures can and should be taken to limit the risk of workers becoming unemployed due to AI, and to reduce the duration of unemployment when it does occur.​

More Total Jobs Thanks to AI

First and foremost, AI is a powerful growth engine. PWC estimates that AI’s contribution to global GDP will reach $15 trillion by 2030(2)—the equivalent of the GDP forecast for the entire Eurozone for 2030.(3)

AI will administer its own unemployment antidote: The World Economic Forum projects that structural changes in the labour market due to AI and related technologies will have created 58 million net jobs worldwide by 2022.(4)

Current forerunners in robotization, like South Korea, Singapore, Germany, Japan, Denmark, and the United States, also happen to enjoy low unemployment rates.(5) While this does not prove a causal link, there is good reason to think that AI creates jobs in various ways.

For one thing, human-machine complementarity is highly productive, and can increase the demand for the combined service. For instance, when electronic spreadsheets transformed the accounting trade in the 1980s, many tedious bookkeeping tasks adding little value became automated. Time saved allowed for higher value-added activities which delivered better value for money and actually drove up investment in accounting services by 50%.(6)

AI also allows less experienced or less skilled workers to be productive much faster, instead of having to learn costly skills and knowledge over years on the job. This will create strong job opportunities for unemployed workers regardless of their level of education.

For example, using large databases on the characteristics and behaviour of clients, advanced Customer Relationship Management software already supplies marketers with high-quality leads from day one. AI can support them further with dynamic algorithms to parry objections and pursue the conversation with clients and potential clients, thus increasing customer retention and reducing high rates of customer rejection. Similarly, AI helps doctors to make and confirm challenging diagnoses (like rare cancers) using large databases. Furthermore, it also allows them to prescribe the most effective treatment available for their patient-specific profile.(7)

Another pervasive effect of the emergence of AI is the possibility of new forms of collaboration with machines. Rescue teams, for example, will trust ancillary bots to handle their most dangerous activities. Early and more complete information collected and transmitted by them will help teams make better decisions under pressure and extend the reach of their activities.(8)

Whether workers develop, operate, maintain, or collaborate with AI-enabled tools, they will be more productive and will benefit from improved (better paid, less risky, more gratifying) job opportunities.

From Manufacturing to Services

Certain occupations are less susceptible to automation than others. In-depth task analysis suggests that both ends of the occupational ladder will benefit early and continuously from AI.(9) Most highly qualified workers will keep developing AI and expanding its fields of application. Some less qualified workers will benefit from the investment in complementary AI-enabled tools and see their wages rise along with their productivity. We should expect demand for their labour to increase and remain strong.(10)

In contrast, many middle-income employees whose jobs are more susceptible to computerization—and who are too expensive to merely operate machines at the lower end of the occupational ladder—may have to migrate from manufacturing to services, where creative and social skills (harder for AI to master) are of the essence (see Figure 1). 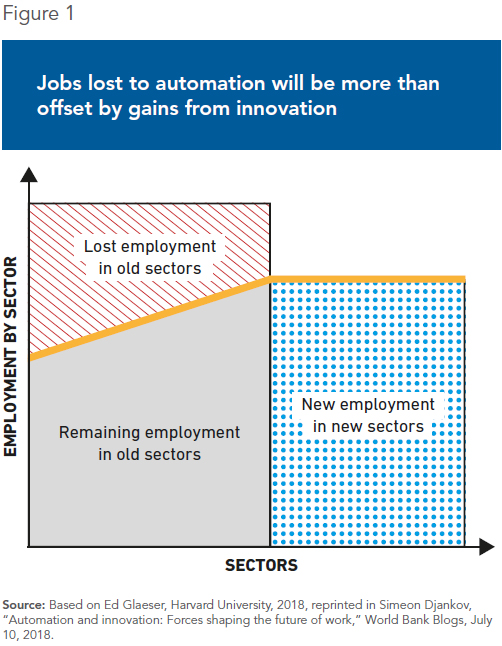 AI and its applications should not be singled out as a cause of the displacement of manufacturing jobs in industrialized countries, since many manufacturing jobs left these countries long ago. On the contrary, automatization will likely encourage some investors to repatriate their manufacturing operations as cheaper, unskilled labour abroad ceases to be a decisive factor. “Reshoring” will then be accelerated because of AI. Adidas is a prime example of this trend to relocate factories closer to their consumer markets, thanks to robots and 3D printing machines.(11)

Yet this requires investment, and a recent study of Quebec manufacturing showed low levels of investment per employee, with even lower rates of innovation among small businesses in recent years.(12) As a consequence, their absolute productivity (when favourable exchange rates are neutralized) is not on par with other industrialized economies, and their competitiveness is questionable. Beyond the cost of the technology itself, it appears that the misperception of the actual value of the investment has been an obstacle to adoption.

We can and should try to alleviate the predicament of those workers most likely to be affected by technological unemployment due to AI.

Investing in human capital is essential if we are to make the most of the economic opportunity AI represents. According to the Word Bank, the education systems of industrialized countries have not prepared the workforce adequately to the advent of AI-related automation. There is a shortage of aptitudes that are harder for machines to master: creative skills like complex problem-solving and social skills like teamwork and leadership.(13)

Industrialized countries must rethink their teaching and training strategies from early childhood all the way to adulthood, as lifelong learning becomes the norm. Education systems are notoriously slow to adapt, which is especially detrimental to workers in a fast-changing world.

Meanwhile, many businesses are bridging the gap by upskilling employees directly. Amazon recently announced an investment of $700 million to retrain one third of its American workforce.(14) Google has an online IT certification program that connects users directly to job opportunities with organizations such as Walmart and Bank of America.(15)

Because of the speed of technological change, colleges should develop closer relationships with the business community in order to better cope with a rapidly evolving environment. They would then be able to design more relevant training programs on demand, using AI (such as virtual mentors) to their advantage.

There are only two ways out of unemployment: finding another job or creating your own by becoming an entrepreneur, either a freelancer or a small business owner. In both scenarios, the removal of obstacles to doing business encourages economic growth and job creation. Labour law, contract law, tax law, and business regulations in general are key factors influencing decisions to recruit, hence potentially shortening or lengthening the duration of unemployment.

Economic freedom has long been established as the main deterrent to unemployment.(16) While the Human Freedom Index ranks Canada 5th worldwide, there is room for improvement on certain subcomponents of economic freedom. The high level of government spending (3.9/10), the high top marginal tax rate (5.0/10), and the mediocre legal enforcement of contracts (3.6/10) are major impediments to business development in Canada.(17)

Indeed, when 8% of tax filers, earning one third of all income, end up paying 52% of all federal income taxes,(18) incentives for creating more economic activity and joining the ranks of these wealthier Canadians are suboptimal.

Excess public spending, especially the public wage component, has an even greater adverse impact on growth. One study finds that a cut in the government wage bill of 1% of GDP leads to an increase of the investment/GDP ratio of 0.51% the first year and 2.77% after five years.(19)

Collecting debt and enforcing contracts—also pointed out as a concern by the 2020 Ease of Doing Business Index where the country ranks 100th in this subcategory (see Figure 2)—is another important issue for Canadian small businesses (fewer than 100 people), which employ close to 70% of the private labour force.(20) 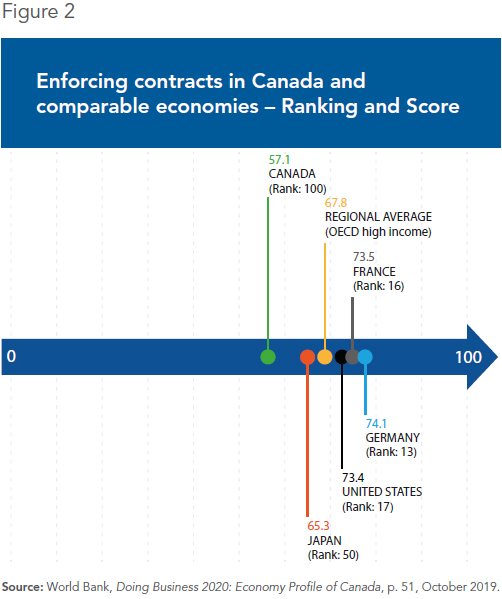 Delinquent contracts in Canada take over 900 days on average to be resolved, more than twice as long as in the US. This puts a strain on the cash flow of SMEs, even if they win the dispute.(21) Legal insecurity also affects the risk profile of SMEs (regarding their receivables) and makes it harder for them to borrow money, already a challenge as they have less collateral.

AI itself will make business creation and self-employment easier and less risky. One’s entire supply chain can be AI-enabled, and suppliers can be found on dedicated platforms. Small firms already have access to global distribution platforms that are growing faster than ever. For example, Taobao (an Alibaba subsidiary) is now hosting nine million businesses and is accessible from every country in the world.

Customer reach today is unprecedented and will keep improving as AI helps to match suppliers with customers through smarter and smarter filtering. Language, cultural barriers, access to banking services, and geographical distance no longer constitute serious obstacles to trade.

This does not mean that entrepreneurship ceases to be risky. Almost four in ten SMEs created in Canada close within the first five years.(22)

Lack of general management and financial management skills is another hurdle to success for SMEs, which brings us back to the schools: It is important to prepare students to become not just employees in full-time jobs, but also (in the growing gig economy) to equip them to become business owners.(23) Meanwhile, entrepreneurship can be encouraged by cutting tax rates for business owners.

The rapid development and deployment of AI is an opportunity that should be embraced instead of feared, but it also magnifies the urgency of several important structural reforms. Educational system reform, lower government spending, marginal tax rate cuts, and the strengthening of contractual arrangements would help Canada minimize the duration of transitional unemployment (including AI-related unemployment) while strengthening its leadership in terms of economic freedom and ease of doing business.

This Economic Note was prepared by Gaël Campan, Senior Associate Researcher at the MEI, and Luc Vallée, Chief Operating Officer & Chief Economist at the MEI. The MEI’s Regulation Series aims to examine the often unintended consequences for individuals and businesses of various laws and rules, in contrast with their stated goals.