Research Paper showing how the removal of internal trade barriers represents an inclusive growth policy for Canada, and ranking the provinces and territories in terms of their openness to internal free trade.

With the vaccine rollout in full swing, the public’s attention is increasingly focused on economic recovery. The authors of this Research Paper propose a very simple solution: a true free trade agreement among the Canadian provinces. This publication includes among other things a ranking of the provinces and territories according to their openness to internal trade. Alberta takes first place, and Quebec comes in last.

Canada was founded as a country with the vision of creating a single market and eliminating border controls and tariffs between regions. Although there are no internal tariffs as such anymore in this country, each province and territory has over time introduced laws and regulations which hobble the movement of goods and services across borders. Yet Canadians are overwhelmingly in favour of one Canada, one market for goods and services. Burdened with large deficits and weakened growth, the removal of internal trade barriers represents a unique opportunity for an inclusive growth policy.

Chapter 1 – The Wealth of Provinces and Territories

Despite the good intentions shown by Canadian provinces and territories in signing the 2017 Canadian Free Trade Agreement, only three have actually walked the walk and reduced their exceptions to internal free trade in the interim. This situation is particularly unfortunate for the less prosperous provinces, which would benefit the most from a true single market from coast to coast to coast. But even the wealthier provinces would see their GDP per capita increase compared to the status quo scenario. In short, the whole country would benefit.

The process of liberalizing internal trade began with Confederation and the elimination of a variety of customs duties between the provinces. The elimination of the CFTA’s remaining exceptions is a unique opportunity to embrace a policy of inclusive economic growth for all of Canada. Given the need to plan for a post-COVID economic recovery in a context of international uncertainty and large deficits, this is an opportunity we cannot afford to ignore. 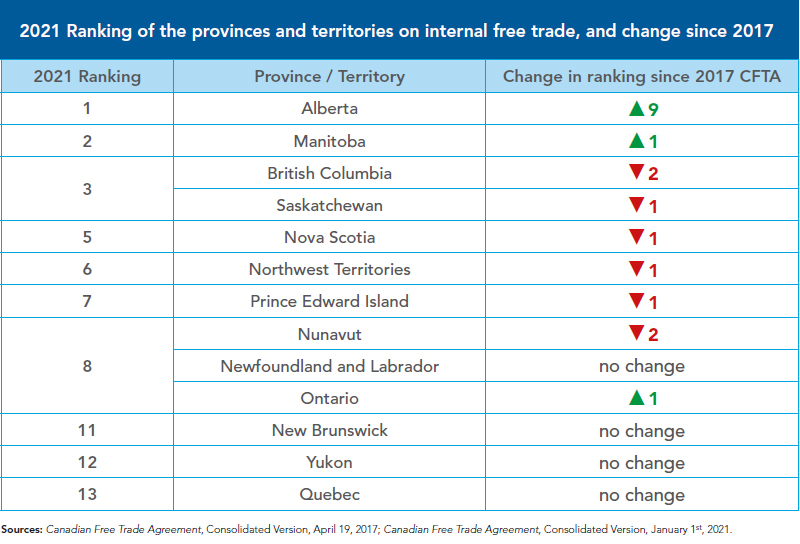 An Inclusive Growth Opportunity for Canada

The MEI’s first Internal Trade Provincial Leadership Index was published in 2019,(1) two years after Canada’s provinces and territories renewed their commitment to internal free trade through the Canadian Free Trade Agreement (CFTA).(2) This was indeed a renewal, since Canada was founded as a country with the vision of creating a single market and eliminating border controls and tariffs between regions.(3) Since the original intergovernmental trade agreement entered into force in 2017, two additional versions have been released, the most recent in January 2021.(4)

One of the primary purposes of Confederation was to create one single market following the end of the Reciprocity Treaty with the United States in 1866,(5) which had allowed the free movement of certain goods between the colonies of British North America and the United States.(6) By uniting to form a confederation, the British colonies created between themselves a stable internal market sheltered from the vagaries of international politics. This provided economic protection from the disengagement of the British, who wanted to reduce their economic obligations in the colonies.(7)

Although there are no internal tariffs as such anymore in this country, each province and territory has over time introduced laws and regulations which hobble the movement of goods and services across borders. Ironically, as international and interregional trade agreements have removed barriers between countries, and Canada has enjoyed fruitful exchanges with trading partners around the world,(8) barriers within Canada have tended either to be raised or maintained. Differing safety standards, technical standards, occupational licensing, and residential obligations—and even outright protectionism—have created artificial costs for Canadians as producers, consumers, and taxpayers, thereby reducing their standard of living.

For example, the only way to work on a Quebec construction site with qualifications from another province is via a complex administrative process to obtain recognition of your qualifications, despite the fact that the Commission de la Construction du Québec recognizes work experience acquired in the other provinces as valid for the purposes of obtaining the equivalent Quebec qualifications.(9) Each province in the country has similar rules and standards that prevent the free movement of goods and services, including labour. These are very costly in terms of time and money for companies that want to do business in several provinces, and they also indirectly penalize taxpayers.

There has also been a great loss of opportunity for communities within Canada that would most benefit from the elimination of trade barriers. Indeed, provinces and territories are not equal in terms of the impediment that trade barriers represent to their productivity and wealth. For example, we found that while all provinces would benefit from interprovincial free trade to some extent, provinces such as Manitoba and Prince Edward Island would benefit much more than Ontario, Alberta, British Columbia, and Quebec.

In line with the vision that first united the country, Canadians are overwhelmingly in favour of one Canada, one market for goods and services. According to a 2020 MBA Recherche poll:(10)

In this Index, the provinces and territories are given an overall score based on the total number of exceptions to free trade they maintain, broken down by category, as per the CFTA’s typology. In general, the progress of the signatories to the 2017 CFTA has been disappointing. Only three provinces, Alberta, Manitoba, and Ontario, have progressed in the spirit of the agreement and reduced the number of barriers they maintain, while British Columbia and the territories have actually increased barriers to trade since the signing in 2017.

Given the substantial gains stemming from the opening up of interprovincial trade for the economic growth of all parts of the country, this second edition of our internal trade ranking should serve as a wake-up call for those provinces and territories not working to reduce and eliminate the different barriers that exist.

In a post-COVID age, burdened with large deficits and weakened growth, the removal of internal trade barriers represents a unique opportunity for an inclusive growth policy that is fully under Canadians’ control. Given geopolitical and international trade uncertainty, the ability to take advantage of our own internal growth potential becomes all the more important.