Economic Note examining the evolution of the US federal deficit and debt under the past six presidents.

As he takes office, President Joe Biden is inheriting a health crisis, an economic crisis compared by some to the 1929 crisis, and mismanaged public finances. This Economic Note sketches a picture of the budgetary policy of President Trump, under whose management the federal government’s debt grew by 36%.

This Economic Note was prepared by Alexandre Massaux, Associate Researcher at the MEI, in collaboration with Miguel Ouellette, Director of Operations and Economist at the MEI. The MEI’s Taxation Series aims to shine a light on the fiscal policies of governments and to study their effect on economic growth and the standard of living of citizens.

The four years of the presidency of Donald Trump certainly raised passions. Both his fans and his critics will have their take on events, controversies, and political crises that occurred during his presidency. It is nonetheless possible to analyze more objectively the budgetary trends under his administration, and compare them with those of his predecessors.

This Economic Note focuses on one specific aspect of the Trump administration: its management of the budget. The goal is to determine its ability to soundly manage taxpayers’ money and the extent to which it held an interventionist vision of the economy.​ 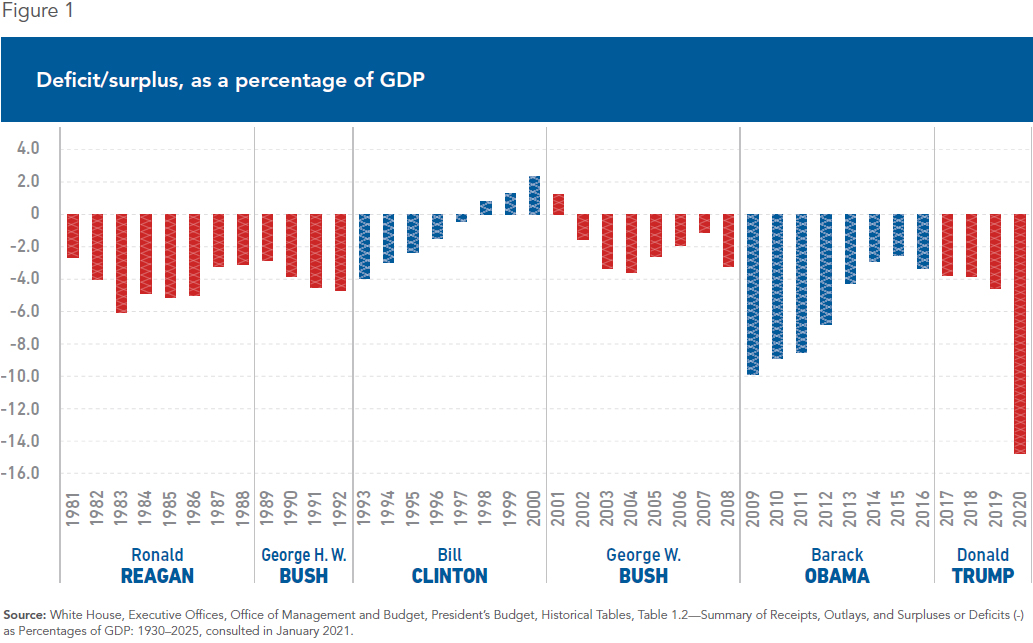 None of the deficits recorded under the presidencies of Bush Jr. and Clinton was as high as even the smallest deficit of the Trump administration. Indeed, the Clinton administration even succeeded in registering budget surpluses. Whereas President Obama brought the deficit back down to 2.4% of GDP in 2015, after substantial deficits during the financial crisis, it increased constantly during Trump’s term, even though the economy when he took office was favourable to its continued reduction.

Indeed, when President Obama started his term in January 2009, in the middle of an economic crisis, the unemployment rate(3) was 7.8% and on an upward trend it had begun in 2008. In contrast, in January 2017, when President Trump took office, it was 4.7% and had been falling since 2010, and the economy was growing.(4) A policy of good budgetary management should, in theory, have contributed to reducing the deficit, and perhaps even running a surplus.

A budget deficit is either related to a reduction in tax revenues or an increase in expenditures. Revenues did not fall under the Trump presidency, even though this was a concern of certain opponents of the 2017 tax cuts.(5) Indeed, in 2016, federal tax revenues totalled US$3.3 trillion.(6) By 2019, they had risen to US$3.5 trillion.(7)

Such a situation is not a problem if expenditures are under control, but these increased faster than revenues. In comparison, expenditures had been stabilized during the first years (2012-2013) of President Obama’s second term, after a considerable increase during the 2008-2009 crisis, and despite new increases starting in 2014.

Finally, during President Obama’s second term, between 2011 and 2016, revenues increased by 41.9% and spending by 6.9%. Between 2017 and 2019, namely Trump’s term before the COVID-19 pandemic, they increased by 4.5% and 11.7% respectively.(8) There was thus a significant imbalance between the increases in expenditures and revenues under the Trump administration, with the former outstripping the latter.

The Weight of Non-Discretionary Spending

Turning to the details of federal expenditures,(9) we observe that defence spending increased under the Trump presidency, from $593 billion in 2016 to $686 billion in 2019, reaching a level similar to that of ten years ago. Hence, a high level of defence funding is not a particularity of the Trump administration. Nonetheless, average spending on national defence represents just 15% of the federal budget,(10) a proportion that remained stable throughout the Trump presidency and which is lower than that of all of his recent predecessors.(11)

Most federal spending is non-discretionary (“mandatory”), determined by law and renewed automatically if the law is not modified by Congress.(12) Moreover, the majority of this mandatory spending is related to Social Security (the public pension plan) and Medicare (health care for seniors). These spending items represented 64% of the budget in 2017, and 62% in 2019.(13) In comparison, budget cuts carried out during the Trump presidency were for less substantial line items like the environment: The Environmental Protection Agency’s budget was cut from $8.73 billion to $8.06 billion.(14) Given that this represents just 0.2% of total spending,(15) this cut was not big enough to reduce the deficit.

The presidency therefore depends in large part on the political choices of the Congress when it comes to managing the budget: With most expenditures being mandatory, it is the legislative branch that has full jurisdiction to modify the laws. Thus, the Democratic Party’s control of the House of Representatives during the last two years of his term(16) explains in part the fact that the Trump administration did not succeed in profoundly reforming Social Security and the expensive health care plan introduced by President Obama (Affordable Care Act), and therefore this rising deficit.

The inevitable consequence of a growing deficit is that the federal debt must increase to finance it. Nonetheless, despite a rising deficit, the debt, even including the year 2020, did not increase as much under the Trump administration as under some of his predecessors. Thus, the gross debt grew from $19.98 trillion at the end of 2016 to $26.94 trillion in July 2020,(17) an increase of 36%.(18) This places Donald Trump within the norm in terms of increasing the debt, similar to Bill Clinton (36%) and George H. W. Bush (26%). In contrast, the Reagan and Bush Jr. administrations increased it by 184% and 93% respectively. However, the Obama administration, even though it was affected by the 2008 economic crisis, increased the debt to a lesser extent, namely 78% (see Table 1). The Trump presidency’s comparatively smaller increase in the debt can be explained in part by the fact that Obama’s term began with a deficit of nearly 10% of GDP due to the crisis, that he then had to bring down, whereas Trump’s term began with a deficit of only 3.4%.(19) 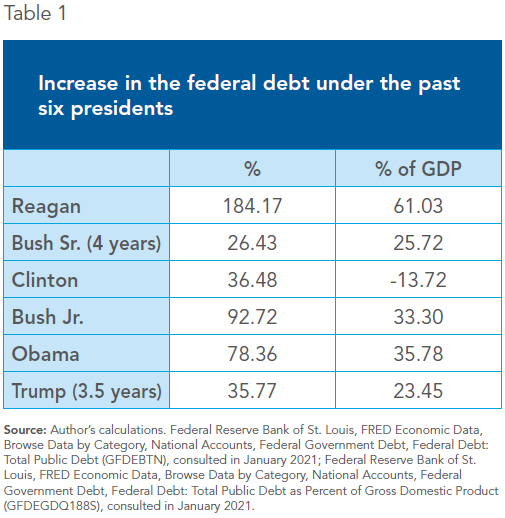 However, it is also important to look at the weight of the federal debt in terms of the size of the country’s economy. Although the debt represented 103% of GDP in 2017, and 127% of GDP in 2020,(20) the increase under the Trump administration was not the biggest of the past 40 years. While the debt burden grew by over 23% from 2017 to the summer of 2020,(21) it increased by 26% under the H. W. Bush administration, 36% under Obama, 33% under Bush Jr., and 61% under Reagan. The only relatively recent reduction, on the order of 14%, occurred under the Clinton administration, as a result of running several budget surpluses.

However, the level of the US federal debt creates a risk in the medium and long run in terms of its sustainability. Indeed, this debt is held by various institutions and entities: While the main holders of the debt are (at the start of 2020) American investors with $9.5 trillion, the Federal Reserve with $4.3 trillion, and Social Security with $2.9 trillion, it is also held in part by foreign countries like Japan ($1.3 trillion) and China ($1.1 trillion).(22) An increase in the debt makes US policy-makers more dependent on holders of its debt.

The role of the US Federal Reserve (the Fed) during crises is also a major point to take into consideration in the presidential terms of Barack Obama and Donald Trump. The activism of the Fed in the monetary economy of the United States, such as injecting $2 trillion in response to the COVID‑19 pandemic,(23) has an influence on debt policy. Indeed, while in the second quarter of 2007, the Fed held $790 billion of federal debt, this amount had risen to $2.8 trillion by the first quarter of 2016, and to $4.9 trillion in the third quarter of 2020.(24) Not only did the debt increase substantially between 2007 and 2020, but the share held by the Fed also grew. The Fed held nearly 9% of the debt in 2007, 15% in 2014, and 18% in 2020 after having fallen to 11% under the Trump presidency pre-
COVID-19.(25)

Furthermore, the evolution of the debt during recent presidencies can be explained in part by the evolution of the US Federal Reserve’s interest rates.(26) Starting from the 2008 crisis, the Fed has maintained extremely low rates that have never come back up to their previous level, despite a situation of economic growth. Low interest rates, and now zero rates, have not encouraged budgetary discipline. While policy-makers could of their own initiative take the opportunity to show some rigour, in the absence of any immediate threat concerning the sustainability of the debt, they did not take action to reduce it. Moreover, the fact that the dollar remains the world’s reserve currency, which reassures investors, removed some pressure on the American government to pay it any mind.

The Trump administration’s management of the budget does not diverge radically from that of its predecessors: With the exception of Bill Clinton, all of the presidents of the past four decades have increased the debt and the deficit. Thus, the Clinton administration proved to be less interventionist and more frugal than the Trump administration. This is due in part to the fact that the legislative branch has paramount jurisdiction in budgetary matters. Hence the executive branch and the president must have the support of Congress to see its policies adopted.

However, the Republican Party’s platform in July 2016 proposed a return to a balanced budget.(27) The party controlled both the executive and the legislative branches for two years, before losing the House of Representatives to the Democrats,(28) but did not succeed in initiating a change in order to achieve this balance. The conflicts between the Trump administration and the other institutions like the Congress and the Fed partly explain this failure. As a result, the United States was not better prepared for the economic crisis related to the COVID-19 pandemic.

The question that now remains is: Which direction will President Joe Biden take, given the current crisis? It is likely that he will follow the path of Barack Obama, under whom he served as Vice President, rather than that of Bill Clinton. The $1.9-trillion relief package he is proposing seems to confirm an interventionist tendency.(29) Lastly, the victory of the Democrats in the Georgia senatorial elections in January 2021(30) ensure that President Biden will be working with a Congress entirely controlled by his party.