Bill 30, the Health Statutes Amendment Act, passed the Alberta legislature on July 29, 2020. The omnibus bill looks to strengthen public health care by amending nine pieces of health legislation to increase the voice and choice of patients and physicians alike.(1) A few of the key changes include: streamlining approval processes for chartered surgical facilities to increase numbers of publicly funded surgeries and decrease wait times; facilitating alternative relationship plans for physician remuneration; and contracting with a variety of organizations for medical clinic operation to allow physicians to focus on patient care rather than administration.

Critics of such reforms are quick to raise concerns about “two-tier” health care and the supposed Americanization of the health system. Such misrepresentation, though, ignores the decades-long trend in high-performing European universal health care systems of expanding capacity and benefitting from more entrepreneurial involvement.

The reality is that health care in Alberta is suffering from inefficiency and outdated systems and is in desperate need of modernization. Both the August 2019 MacKinnon Report(2) and the May 2020 Fair Deal Report(3) noted a need for innovation and creativity in health care delivery in Alberta, such as using private clinics to deliver publicly funded services. Bill 30 is a step in that direction. Far from backing down, the Alberta government needs to embrace further reform to provide true patient-centered care.​

When compared to many high-income European countries with universal health care systems, Canada’s expensive Medicare system consistently has below average results, and lags in timeliness of care.(4) With approximately one million Canadians(5) on wait lists in 2019, in pain and suffering a reduced quality of life, the very notion of access, one of the principles of Medicare, is in question. In the words of Chief Justice Beverley McLachlin,(6) “Access to a waiting list is not access to health care.”(7) Only 32% of Albertans believe that the health care system treats patients in a timely manner.(8) It’s clear to Canadians—especially the one million whose health is on hold—that something needs to change.

In an already expensive and underperforming system, Alberta spends 8.3% more per capita than the Canadian average, and more per capita than comparable provinces such as Quebec (10.4% more), Ontario (10.1% more), and British Columbia (17.0% more).(9) Alberta’s per capita health spending more than doubled between 1993 and 2019, yet wait times for medically necessary surgeries saw an enormous 167% increase.(10)

In 2019, Albertans waited nearly 20% longer than the Canadian average to see a specialist from referral, not to mention 50.0% longer than Ontarians, and 66.7% longer than Quebecers. To actually receive treatment following a specialist appointment, Albertans waited nearly one and a half times as long as the Canadian average (48.1% longer) and those in BC (41.6% longer), and even longer compared to Quebecers (75.8% longer) and Ontarians (100.0% longer).(11) The cost of these wait times to patients was estimated to be nearly $500 million in 2019 just in lost productivity and leisure time.(12)

In procedures with no established benchmark wait times, Alberta has consistently seen longer wait times than the Canadian average until very recently (see Figure 1). For surgeries with established benchmarks, there were approximately 80,000 people in Alberta on waiting lists in May.(13) Of these, 50% wait longer than clinically recommended targets.(14) 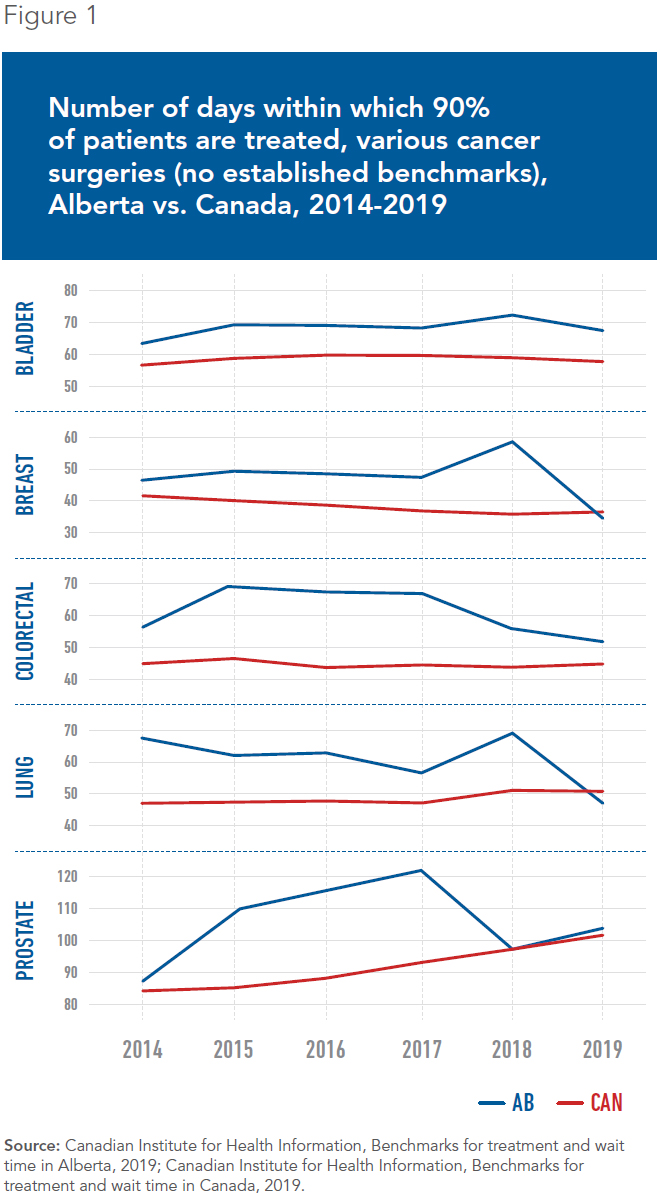 To attempt to tackle these wait lists, the Alberta government recently established the Alberta Surgical Initiative (ASI), based on the 2010 Saskatchewan Surgical Initiative (SSI) which promised that by 2014 no patient would wait more than three months for surgery. By 2016, Saskatchewan’s wait times for elective surgery were among the shortest in Canada.(15) The SSI changed how wait lists were managed by prioritizing patients and using private, for-profit clinics to deliver day-surgery procedures covered publicly. Though the SSI dramatically reduced wait times, capacity had to be increased, which meant more money for an already expensive health care system. As waiting lists are a result of the structure and funding of the health care system, when the increased SSI funding ended, wait times again began to creep up, increasing 29% between 2015 and 2018.(16) It’s clear that broader reform is necessary.

Any reform to health care is a provincial matter. Canada’s universal health care system is a collection of provincial and territorial insurance plans underpinned by the Canada Health Act (CHA) but structured almost entirely by provincial legislation. The federal government, under the CHA, defines the criteria that provinces and territories must adhere to in order to qualify for Canada Health Transfer funds.(17) Therefore, the federal government’s responsibility for provincial health policy lies exclusively in its role governing provincial access to federal funds.

As the CHA is not binding, a provincial law that infringes it is not illegal, and brings penalties that are political and financial, not legal.(18) Non-compliance with the CHA is subject to a discretionary penalty, along with non-discretionary dollar-for-dollar penalties for extra-billing and user charges.(19) Under the CHA, provinces are free to incorporate the private sector in their health care innovations, whether through private delivery of publicly funded medically necessary hospital services, private insurance to finance health care services, or permitting dual practice for physicians.

It is therefore the provinces that have chosen policies that limit patient choice and health sector entrepreneurship, and it is the provinces that are responsible for reforming health systems according to best practices. Among these best practices, sometimes overlooked by a myopic focus on the US system, are successful policies of European countries with universal health care systems. These European policies provide better access to care and quality of life for residents, and increase patient choice through competition and entrepreneurship, using market principles to help improve health systems. In particular, policies related to private parallel health care services or insurance, or private for-profit delivery of universally accessible hospital services, are not violations of the CHA, and can therefore be adopted without fear of losing federal funding.(20)

Most high-performing universal health care systems utilize some sort of activity-based funding model to remunerate hospitals. This type of funding model encourages competition and incentivizes reduced expenditures, with patients being seen as sources of revenue instead of costs, as they are in the global budgets widely used in Canada.(21) Countries that make widespread use of activity-based financing tend to see an increased number of services performed and reduced wait times, as well as increased efficiency. For example, France, the Netherlands, Sweden, and Switzerland all have shorter average length of stay in hospital than Canada.

These countries also allow the private sector to operate in a parallel system. Whether it be delivering medically necessary hospital services or financing and delivering health care services, universal access is maintained, and outcomes are better than in Canada. They generally have more hospital beds, more doctors, and shorter wait times than Canada, despite older populations.

Private insurance, in different forms, is also a feature in these countries. By allowing the private sector to inject resources into the health care sector, patient choice is increased while the burden on public insurance is decreased. For example, in Denmark, where a true private insurance market thrives, pressure on the public sector is lower, access to care is better, and wait times are substantially shorter.(22)

In France, a third of hospitals are private for-profit,(23) and these cost 27% less than the public sector in treating the same conditions.(24) All French citizens can choose to have treatment in the public or private sector with the cost covered by public insurance.(25) Contrary to those who fear a two-tier system wherein the rich get enhanced treatment to the detriment of the poor, in France the private sector actually focused on expanding service to poorer areas that had been neglected by a public system whose priorities were politically determined.(26)

Reform Has Been Halting So Far

There has been some movement in this direction in Canada already, as duplicate private insurance is allowed in Quebec, in a limited way, following the June 2005 ruling of the Supreme Court of Canada in the Chaoulli decision. This decision acknowledged patients’ irreversible harm and suffering from the non-price rationing of health care services when the public option is the only option.(30) Unfortunately, wait times in Quebec have barely budged, as the government chose to interpret the Supreme Court ruling narrowly, so the number of admissible surgeries is low while the prohibition on dual medical practice eliminates incentives for providers.(31) In British Columbia, the decade-long Cambie Surgeries Corporation legal challenge led by Dr. Brian Day goes further than Chaoulli in attempting to overturn more than the restriction of private insurance for medically necessary care, also challenging the restrictions on dual practice and extra-billing provisions. Regardless of the outcome of the trial, which heard closing arguments in February, the case is expected to go before the Supreme Court of Canada.

One thing we can learn from these cases so far is that it is up to individual provinces to reform their systems. A large majority (63%) of Albertans think the government should allow private entrepreneurs to provide more health care, so long as services are still publicly covered, while 62% of Albertans believe patients should have the right to buy private health insurance if they are not treated within a reasonable time in the public system (see Table 1).(32) 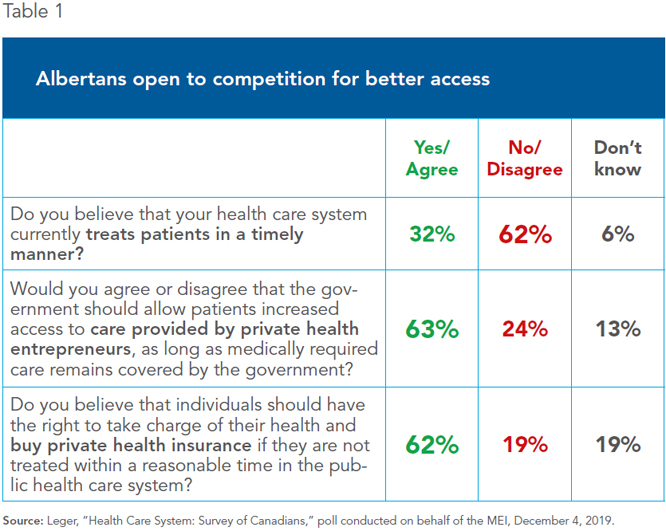 While Alberta’s formulation of the ASI is a strategic move that will undoubtedly decrease wait times in years to come, if the experience of the SSI is any indication, this will be temporary. With a health care system that already eats up approximately 40% of the Alberta government’s operating budget—and with lockdown deficits making public spending more difficult going forward—increasing health care costs further without addressing the underlying structural issues through reform is only a band-aid solution.

Canadian patients have much to gain from using best practices identified in Europe’s successful universal systems. The CHA allows innovation to get value for money, with care publicly funded but provinces free to see what works and to bring in new partners. Alberta’s latest reform bill, by beginning to allow more entrepreneurship in the delivery of care within the province’s universal health system, is a step in the right direction. However, the Alberta government needs to embrace further reform if it is to modernize its health system and provide true patient-centered care.