Even at times of strong economic growth and reduced unemployment, poverty remains a pressing concern. This is particularly true since the various levels of government now enjoy huge budget surpluses with which they could fund new anti-poverty programs if they so desired.

This is an excellent moment, then, to review what the state has accomplished on this issue over the past few years and to consider if additional funds or new programs could wage a successful fight against poverty.

A recent review by the Montreal Economic Institute called L’État-providence et les pauvres, concerning the impact on poverty of social programs, concluded that increased social expenditures do little to reduce poverty in Canada, in contrast with preconceived notions.

Some 31% of expenditures made by all levels of public administration in Canada are devoted to social services; these expenditures encompass the various transfer payments subsidizing individual incomes, along with related administrative expenses. If we define social programs in their broadest sense to include healthcare and educational projects, this share climbs to 60% (or $227 billion in 1997).

However, only a small part of this 60% of public expenditures actually reaches the poor. Outside of social welfare, with benefits aimed mainly at low-income recipients, most transfer payments and programs are targeted at the general population. Some benefits, like those supporting post-secondary education, are mainly of use to the most prosperous and serve as a means of redistributing income to the wealthier members of society.

Using reasonable estimates and assumptions(1), we have concluded that only 38% of Canadian social expenditures (or $87 billion of the $227 billion spent in 1997) is actually devoted to the poor.

This means the various levels of government spend a great deal on social programs and services, a significant share of which is directly aimed at the poorest members of society. Furthermore, real per capita social welfare expenditures virtually doubled from 1980 to 1997, rising from $1,928 to $3,725 in 1992 constant dollars.

We would expect such spectacular outlays to have gradually made a quantifiable dent in the proportion of poor people in our society. However, over this same time frame (from 1980 to 1997), the number of « low-income individual, » as defined by Statistics Canada, fluctuated between 14% and 19%. During this period, poverty rates and social expenditures sometimes moved in unison – and at others, in opposite directions.

In other words, there is no clear correlation between increased social expenditures by the various levels of government and the decline in poverty.

The crucial issue does not seem to be lack of money, but rather the way in which it is spend. MEI’s economic analysis showed that if the 5.4 million poor Canadians were to receive just a fraction of the funds earmarked to social expenditures, they would easily rise above the poverty line. Just thirty-seven billion dollars would be enough to meet this goal.

I believe we must fight poverty, while keeping tabs on the effectiveness of government measures geared to this purpose. Demanding constant increases in public poverty-fighting funds will not necessarily afford the best solution. We should also contemplate means other than those traditionally applied over the past twenty years, given their apparently limited effectiveness. 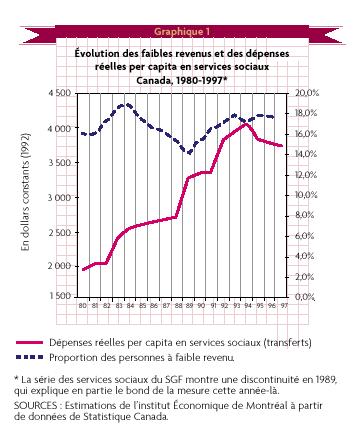 Growth of Low Income and Real Per Capita Social Welfare Expenditure in Canada, 1980-1997

1. Our only statistical estimate is based on Prof. François Vaillancourt’s work for the Macdonald Commission, and pertained to the situation in 1981. These conservative estimates take into account changes that have occurred subsequently.