On Monday April 19, the federal government of Prime Minister Justin Trudeau presented its first budget in over two years. In this publication, Montreal Economic Institute researchers shine a spotlight on the rapid growth of debt service charges.

This Viewpoint was prepared by Miguel Ouellette, Director of Operations and Economist at the MEI, and Maria Lily Shaw, Economist at the MEI. The MEI’s Taxation Series aims to shine a light on the fiscal policies of governments and to study their effect on economic growth and the standard of living of citizens.

With the long-awaited release of the federal budget, the Trudeau government has set two new records, neither of which is anything to brag about. The first: the longest period in Canadian history between budgets. Indeed, 762 days have passed since the tabling of the previous federal budget, creating a climate of great uncertainty for investors and Canadians for over two years. The previous record holder was the Liberal government of Jean Chrétien, with a stretch of 651 days without a budget in the early 2000s.(1)

The second new record: the highest level of federal debt in Canadian history. Projected to reach $1.3336 trillion by 2022,(2) the net federal debt has more than doubled since its 1997 peak (see Figure 1), and when adjusting for the effects of inflation, it has increased by 60% since then.(3) In addition, the budget confirms that in 2020-2021, the annual deficit will have been the largest since Canada began keeping track in 1966: $354.2 billion.(4) 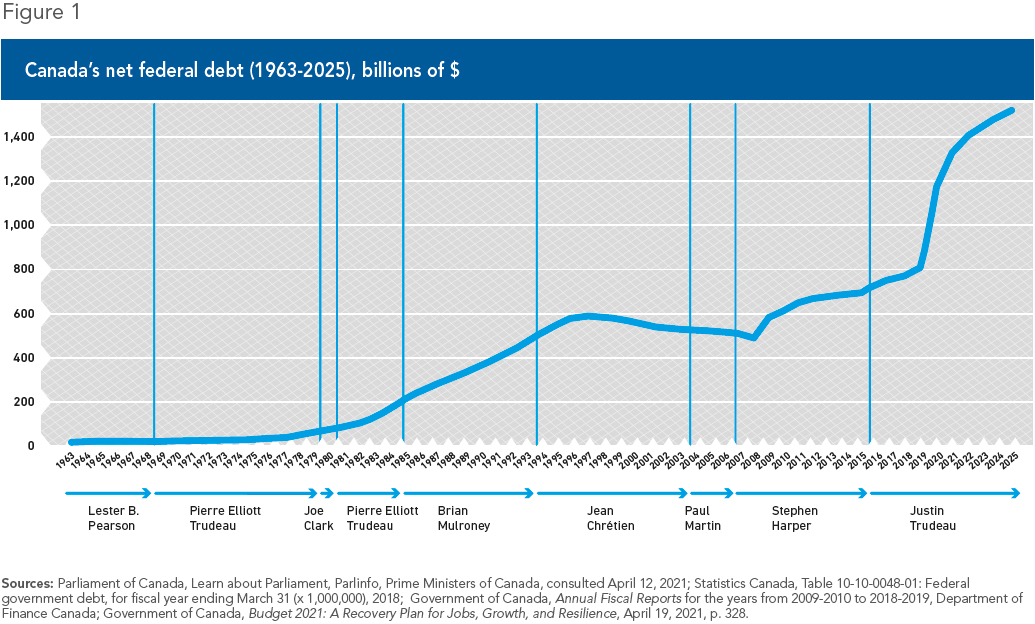 While this year’s deficit is of course partly due to various measures introduced in response to COVID-19, the budget shows no sign of the government reining in its spending in the medium term. In fact, Canadians are being told that such aggressive debt expansion is readily sustainable because of historically low interest rates. However, we cannot simply bank on these rates remaining at such rock-bottom levels. Already, strong inflationary pressures are being observed in the United States, and Canada could soon feel them too.(5) When interest rates begin to return to pre-pandemic levels as a means to slow inflation, borrowing costs will rise accordingly and put further pressure on Canadian taxpayers, who must ultimately foot the bill.

Not so long ago, in the early 1990s, when interest rates were above 10%,(6) Canadians were paying over $40 billion in debt servicing charges every year,(7) despite the federal debt being half of what it is today.(8) With our record-breaking level of indebtedness, one can only imagine by how much our debt servicing costs would rise with the slightest increase in interest rates.

But even at currently low rates, with great debt come great interest payments that consume government resources. Debt servicing costs, also known as public debt charges, are projected to reach $22.1 billion in 2021-2022, gobbling up 6% of total federal revenue. This ratio is projected to climb to 9% in 2025-2026, meaning that for every dollar in revenue collected by the government, nearly 10 cents will be surrendered to paying interest on the federal debt. That’s money that could be spent on important public programs, or left in taxpayers’ pockets.

To put this into perspective, consider that the federal government spends over 187 times more servicing its debt than it does supporting Canada’s veterans.(9) In fact, just $118 million was allocated to the support of retired soldiers for the 2021-2022 fiscal year, corresponding to merely 0.53% of the amount spent on public debt charges for the same period. As for home care, mental health, and homelessness prevention combined, nearly seven times more resources are allocated to paying interest on our country’s debt (see Figure 2). This is particularly worrisome, as some reports have anticipated a rise in homelessness of as much as 15%(10) in some Canadian cities due to economic instability during the COVID-19 pandemic. In short, the funds spent on public debt charges could surely be put to better use. 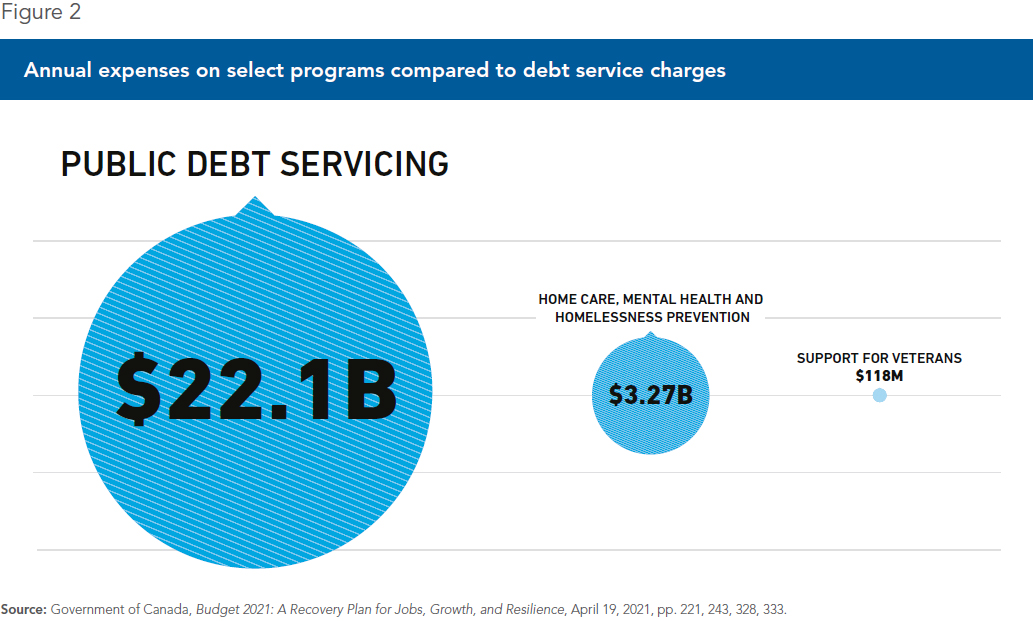 Moreover, this year’s budget projects that interest payments on the debt will grow by 78% between 2021-2022 and 2025-2026. Meanwhile, Canada’s health transfers and seniors’ benefits are projected to rise annually by 20% and 30% over the same period, respectively. Debt servicing costs thus represent one of the government’s fastest-growing expenditures.

Debt servicing consumes considerable resources and displaces spending on things Canadians care about, such as financing their province’s health care system. In fact, in March 2021, premiers across the country urged the federal government to immediately increase health transfers by $28 billion.(11) If debt servicing were not so expensive, perhaps more funds could be directed toward helping the provinces finance their health systems or the reforms they need.

The only way to stop wasting so much taxpayer money on debt service charges is to shrink the federal debt. Only then will debt servicing costs begin to fall, and much-needed funds be reallocated to other matters.

This can be achieved with a concrete plan to reduce the federal debt that includes careful control of direct program spending and adopting tax reform that fosters growth and job creation, to the great benefit of all Canadians. Such a plan would place entrepreneurs on the front line in the battle for a more sustainable and equitable federal budget and ensure taxpayer dollars are put to better use.

Just as Canadian families must manage their loan interest payments, Canada’s federal government must do the same. Ultimately, though, when governments borrow, taxpayers are once again responsible for paying the price. Every year, the interest payments we dish out are a sobering reminder that there are no free lunches when it comes to government debt.