With the 2021 United Nations Climate Change Conference (COP26) set to begin in a few short days, governments are expected to double down on GHG emission reduction targets. A recent MEI publication described how carbon capture, utilization, and storage (CCUS) technologies can allow governments to reach their targets without compromising our standard of living. This follow-up publication offers tangible solutions to encourage uptake of this new technology by entrepreneurs.

This Viewpoint was prepared by Krystle Wittevrongel, Public Policy Analyst at the MEI, in collaboration with Miguel Ouellette, Director of Operations and Economist at the MEI. The MEI’s Environment Series aims to explore the economic aspects of policies designed to protect the natural world in order to encourage the most cost-effective responses to our environmental challenges.

Emissions targets are likely to be more ambitious following the upcoming UN Climate Change Conference (COP26).(1) As the only type of technology currently available with the potential to generate negative emissions,(2) carbon capture, utilization, and storage (CCUS) is crucial to Canada’s climate strategy. CCUS is recognized by both the Canadian government and the private sector as a golden opportunity for the economy as well as the environment.(3) Yet public policies to encourage these technologies must be carefully crafted to ensure they are as efficient as possible.​

The federal government will introduce an investment tax credit in 2022 for capital invested in CCUS projects.(4) This credit will be available across a range of industrial subsectors and include several types of projects to accelerate the adoption of CCUS technologies in order to help reduce GHG emissions.

Notably excluded from eligibility, however, are enhanced oil recovery (EOR) projects which inject carbon dioxide into operating oil fields to enhance the effectiveness of hydrocarbon extraction, trapping 90% to 95% of the CO2 thus injected underground.(5) In other words, an EOR project, which involves oil extraction, would be ineligible for the credit as proposed, even though the process captures and permanently stores carbon, thus reducing the overall carbon intensity of oil over its lifecycle.

A few considerations are worth noting regarding the design and delivery of this tax credit. First, while it can be an effective environmental lever with the potential to stimulate innovation in CCUS if targeted properly, the exclusion of EOR projects is unwarranted and arbitrary. If the government of Canada wants to move toward its goal of net-zero emissions, this exclusion should be removed. Next, the tax credit should be refundable. While nonrefundable tax credits are the most common type, they tend to favour incumbents, as they are less valuable (if at all) to new firms that generate little income.(6) Making the tax credit refundable will level the playing field for start-ups and others with negative or fluctuating net incomes. These recommendations would ensure that the policy encourages innovation without the government arbitrarily picking winners and losers in the market.

In consultations on the design of the investment tax credit, the federal government has asked: “Could the design of the tax credit encourage or ensure a certain performance standard? For example, the amount of sequestration per dollar invested?”(7) If a tax credit is to be tied to performance, it would make more sense to roll it out separately, and not link it to the credit for capital invested in CCUS as this would add layers of complication and administration. In this regard, we could look to the US performance-based Section 45Q Tax Credit as a potential model.

Lauded by many as being the most progressive incentive specific to CCUS, Section 45Q offers eligible facilities and projects a tax credit for each metric ton of carbon oxide captured, provided a number of conditions are met.(8) The amount of the credit depends on a number of factors, one of which is the method of sequestration. For example, if an American cement plant emits 80,000 tonnes of CO2 annually yet captures and geologically sequesters 55,000 of those tonnes, its net emissions are actually 25,000 tonnes, and it would have received a tax credit of over $1.7 million in 2020 for this effort.(9)

This tax credit is in fact applicable to EOR projects, and it is estimated that the majority of CCUS projects in the near future will continue to be EOR projects to offset the costs of capture and generate revenue.(10) The Canadian version of this performance-based tax credit should be wedded to the carbon tax, based on net emissions. In other words, if CCUS reduces a company’s net emissions but these remain positive, this would merely lead to a reduction in carbon taxes paid. But if net emissions are reduced below zero, the federal government should compensate the business through a refundable tax credit.

A performance-based tax credit decoupled from the investment tax credit for CCUS would incentivize entrepreneurs to innovate and continue to find new ways to improve the amount of emissions they are able to capture, store, and/or use. As a result, projects will thrive or not based on entrepreneurs’ different innovations, not on policy-makers’ arbitrary decisions. In addition, as the credit is directly tied to the amount of carbon that would otherwise have been emitted, the environmental benefit is clear.

While the federal government has indicated that CCUS is a viable tool in Canada’s climate strategy, Quebec’s recent official announcement that it will ban oil and gas production(11) will also mean the revocation of carbon storage permits in the province. The provincial government does not seem to have considered the transformative potential of emerging carbon capture technology in getting Canada to its net-zero goal.

Yet Canadians have an affinity for innovation, as do entrepreneurs more specifically. Thanks to this, the intensity of Canada’s GHG emissions has fallen substantially in recent years, whether measured per person, per unit of GDP, or per unit of energy consumed (see Figure 1). However, the Canadian population has also grown by some 25% since the year 2000, leading to little change in total GHGs emitted. 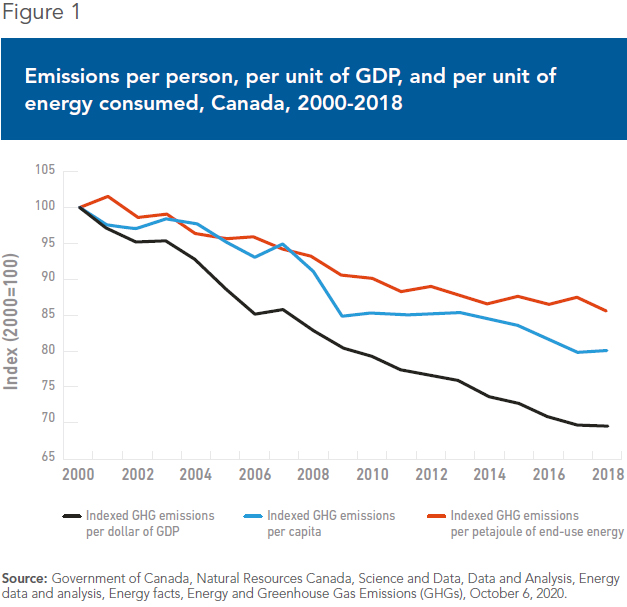 The further innovation of the emerging CCUS technologies sector promises to help the government meet its environmental goals while favouring economic growth, and preserving a high standard of living for Canadian families. With some adjustments to minimize market distortions—not excluding EOR projects, making the tax credits refundable, and decoupling a performance tax credit based on net emissions (see Figure 2)—the proposed federal CCUS measures could be very motivating for entrepreneurs, with little government oversight or spending required. 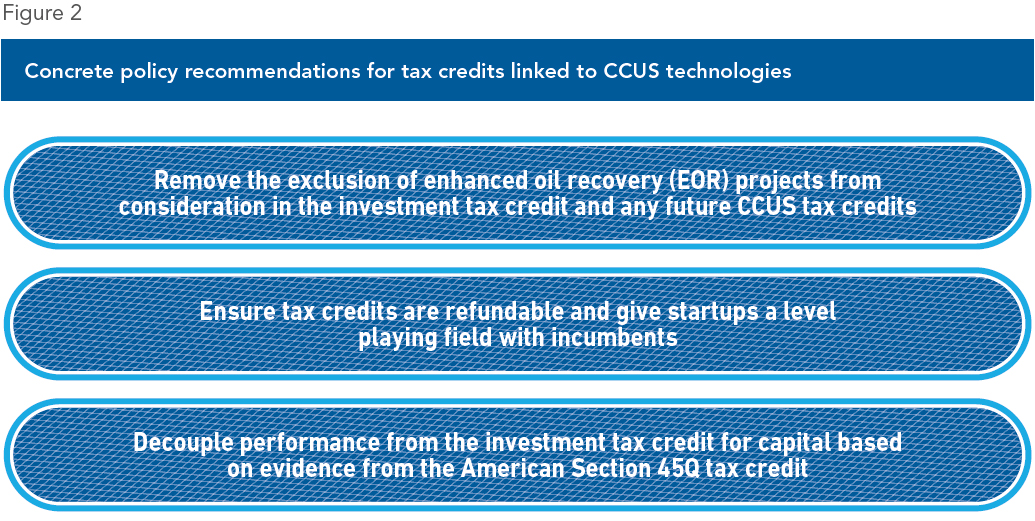