The Canada-US softwood lumber dispute that has lasted some forty years is good for neither country, MEI researchers conclude in this publication. The drop in Canadian production has direct consequences on this country’s forestry industry, and is not offset by the increased production south of the border, which leads to a net loss in the volume of wood available in the American market. This artificially induced greater scarcity of wood leads to higher costs for consumers.

This Economic Note was prepared by Olivier Rancourt, Economist at the MEI, and Gabriel Giguère, Public Policy Analyst at the MEI. The MEI’s Regulation Series aims to examine the often unintended consequences for individuals and businesses of various laws and rules, in contrast with their stated goals.

Tensions related to the trade in softwood lumber across the Canada-US border are not new. The imposition of protectionist measures has now persisted for some forty years.(1) Successive disputes between the two trading partners, notably involving American politicians and producers accusing the Canadian forestry sector of dumping, have repeatedly been accompanied by the imposition of tariffs on Canadian softwood lumber.(2) The main reason given by our southern neighbour in defence of these harmful measures is that 94% of Canadian forests are public, which proves according to them that Canadian softwood lumber is subsidized.(3) The US government maintains this position despite multiple losses before WTO and NAFTA tribunals.(4)

While tariffs have benefited American softwood lumber producers, Canadian forestry companies saw a US$60-million slowdown in their activities in 2017.(5) Moreover, American consumers, who saw the price of softwood lumber increase following the imposition of duties on Canadian lumber, are the big losers in all this. Tariffs on this resource have had more negative than positive effects on the economy and on American consumers.

A History of Conflict

There have been five separate disputes since 1982. Placed end to end, these conflicts over Canadian softwood lumber total 19 years, or nearly one in every two years since tensions began.(6) In addition to having lasted too long already, this series of disputes has hurt the economies of both countries.

The first dispute erupted in 1982 when the United States filed complaints alleging that imported Canadian softwood lumber was, according to American producers, heavily subsidized.(7) A few years later, in 1986, the American forestry sector filed new complaints, this time before the International Trade Administration (ITA), an organization attached to the US Department of Commerce, which then established countervailing duties of 15% on Canadian softwood lumber. The imposition of tariff barriers on the resource was a first in the saga.(8)

This American reflex of imposing tariffs would persist, and would have negative repercussions on trade between the two partners. An agreement was then reached between the two parties in 1986, setting 15% tariffs. Canada withdrew from this agreement in 1991.(9) Two other disputes between the trading partners followed in 1992 and 2005, both accompanied by complaints under free trade agreements.

The final dispute broke out in 2016 after Canada’s non-renewal of an expired agreement that had lasted over nine years. This fifth dispute—which persists to this day(10)—is part and parcel of the economic nationalism exemplified by President Trump’s “Make America Great Again” slogan, as well as the Biden administration’s modifications to the Buy American Act. It features duties on softwood lumber of 20.83% imposed in November 2017 by President Trump.(11)

Following the complaint filed against the United States by Canadian representatives, the WTO concluded in a report made public in 2020 that the US Department of Commerce had not acted objectively and impartially with regard to American countervailing duties and antidumping measures.(12) This decision shines a light on the disproportionate reaction of politicians south of the border.

The goal of customs duties is to penalize Canadian softwood lumber producers and favour the purchase of resources from American producers. US authorities collected C$5.6 billion in export duties from the Canadian forestry industry between 2017 and 2021.(13) In 2021, over 84% of exports of this Canadian natural resource went to our southern neighbour.(14)

Furthermore, our projections show that from 2017 to 2027, these tariffs will have reduced Canadian producers’ exports for a value of over US$3 billion(15) (see Figure 1). This loss of value is not offset, however, by the increased activity of American producers stemming from the imposition of duties. Overall, according to our projections, with duties of 20.83%, there was a net loss of production of 71,000 m3 of wood, taking into account the decreased activity at Canadian sawmills and the increased activity at US sawmills.(16) This net loss, as we shall see below, has repercussions on the prices paid by American consumers. 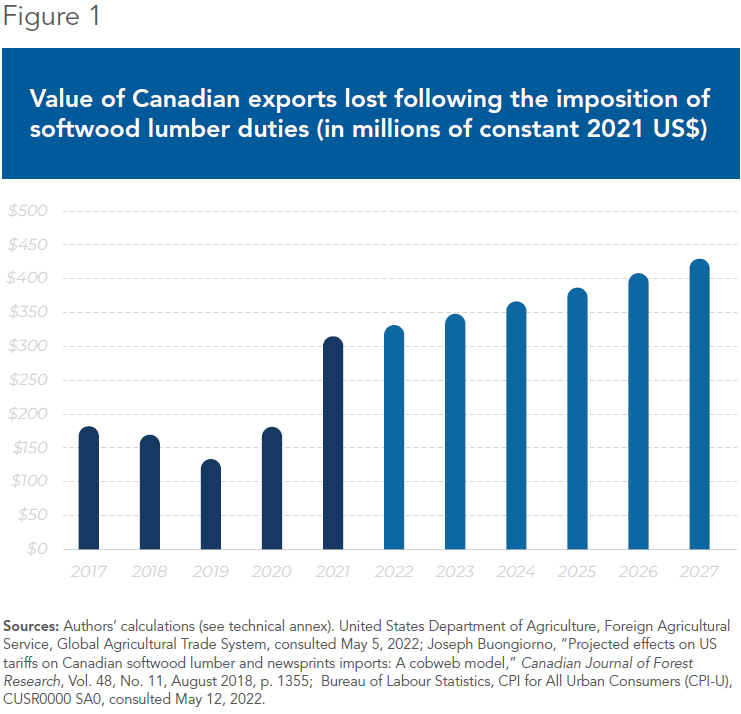 This loss should worry Canadians, since the forestry sector represented $24.2 billion in 2019.(17) Given the size of the sector, these tariff barriers have a direct impact on the country’s economy as a whole.

This drop in exports can be seen in the variation of the volume of wood exported to the United States. From 2017 to 2019, the volume exported (in m3) per year fell by 9%.(18) The projected repercussions of the duties corresponds to a reduction of over 14 million cubic metres of wood over 10 years(19) (see Figure 2). While duties have fluctuated over time, they will certainly have a negative impact on the volume of wood produced, as the loss of volume will not be fully compensated by domestic production activities south of the border. 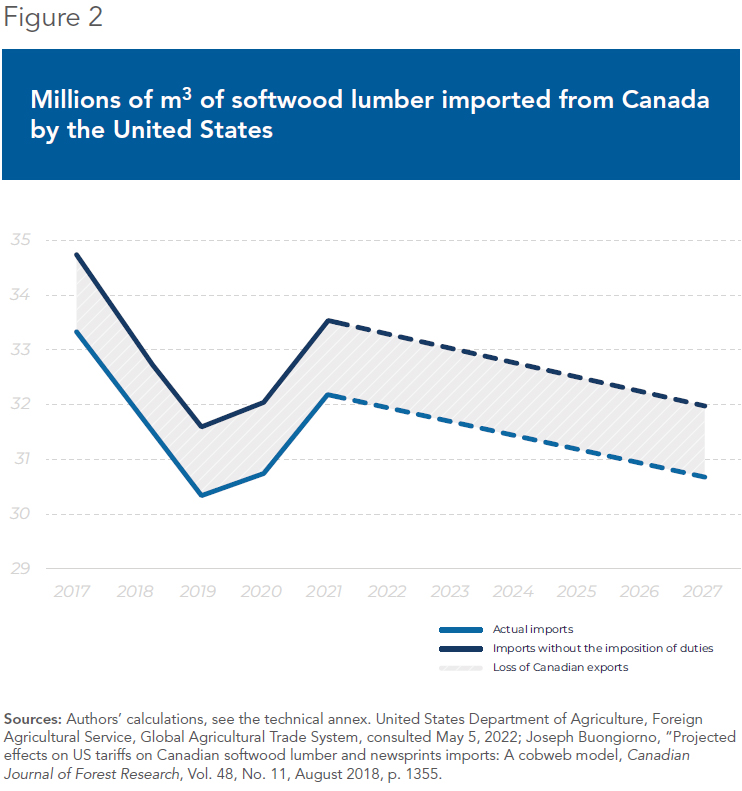 It must be noted that the Canadian forestry sector is missing out on several business opportunities because of the tariff barriers. Nonetheless, it would be a mistake to think that Canada is the only country that loses; the American market also suffers. The reason is simple: Given that the reduction of imports is not entirely compensated by increased domestic production, the quantity of lumber available to consumers falls. Prices therefore rise. Even if this is obviously not the only factor having an effect on the price of this material, its influence is undeniable.(20) In the end, it is American consumers of softwood lumber who find themselves paying more for these materials because of these duties.

American consumers lost the equivalent of over $1.56 billion in 2017 because of duties on the Canadian forestry sector imposed by their political leaders.(21) These tariff barriers hurt American consumers 26 times more in 2017 than they hurt Canadian producers.(22) In other words, the financial repercussions for the US population were 26 times greater that year than for producers in Canada, for whom they represented a loss of economic well-being of just US$60 million.

US politicians need to address this situation and acknowledge the harm they are causing to their own population (see Figure 3). Moreover, we estimate that the loss of economic well-being of American consumers was 7% greater than the gain for that country’s producers.(23) The duties therefore amount to a transfer from American softwood lumber consumers to producers. Given these facts, it would be in the interests of Americans for their government to revise its protectionist policy. 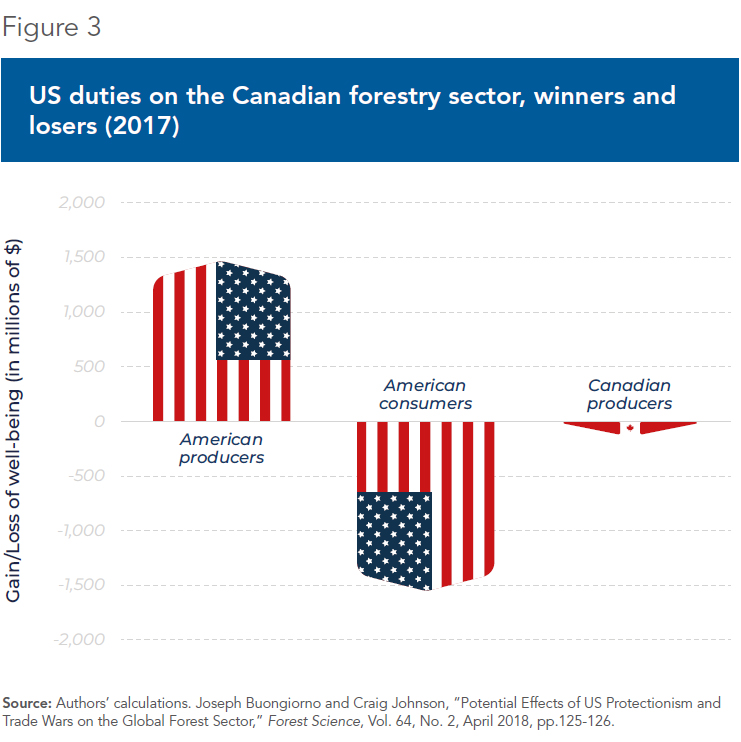 For their part, softwood lumber consumers can also be producers of other products, including artisans and certain industries like residential construction. For this reason, among others, the National Association of Home Builders came out against the imposition of tariffs in 2022(24) that would push up the already high price of wood.(25) It denounced the fact that US production is unable to meet domestic demand.(26) US duties discourage consumers from purchasing this resource given the price increases that are entailed.(27) According to one study, this led to a reduction of 240,000 m3 in the demand for softwood lumber during the period when the duties were 20.83%.(28)

The case is clear: Protectionism has negative repercussions for the economies of all countries concerned. We have known this for centuries, notably since the economist David Ricardo demonstrated it with his theory of comparative advantage.

Admittedly, the United States is not alone in imposing these kinds of measures that undermine economic prosperity. Canada has also erected a number of barriers to free trade. The case of supply management is a clear example of Canadian protectionism in action. It consists of quotas and tariffs that can go up to 300% on certain products.(29) Whether it is duties on Canadian softwood lumber or our own supply management system, protectionist measures directly harm the consumers of the countries that put them in place.(30)

The Canada-US softwood lumber dispute, which has persisted for four decades, is good for neither country. The loss of production on the Canadian side has direct consequences for the country’s forestry sector, and it is not fully offset by the increased production in the United States, resulting in a net loss. On their side, despite increased activity for American producers, it is American consumers who pay a hefty price. If the US government were to remove all tariff barriers on Canadian softwood lumber, both countries would come out ahead.