Economic Note on the need to diversify Canadian oil exports by building new pipelines, the safest and greenest way to transport oil

The revoking of Keystone XL’s permit by US President Joe Biden his first day in office highlights the risk for Canada of depending on a single country for its petroleum product exports. This Economic Note points out that the construction of new pipelines on Canadian soil would help the country reduce this risk and maximize revenues from oil exports, thus encouraging job creation and improving Canadians’ living standards.

This Economic Note was prepared by Miguel Ouellette, Director of Operations and Economist at the MEI. The MEI’s Energy Series aims to examine the economic impact of the development of various energy sources and to challenge the myths and unrealistic proposals related to this important field of activity.

Since the election of Joe Biden last November, Canada’s attention has turned to what this could mean for our economy and our energy sector. His first day on the job, January 20, President Biden signed a presidential decree revoking Keystone XL’s permit.(1) Given the positions he staked out during his campaign,(2) we can expect this decision, costly for Americans as well as Canadians, to be followed by similar ones.

Canadian governments, both federal and provincial, will certainly have to deal with this change of vision from our southern neighbour and reconsider, as of now, their economic strategy for energy projects. Indeed, the arrival of an American president who is opposed to energy projects that are dear to the Canadian economy, combined with increasingly mobilized anti-pipeline activist groups, is fraught with very substantial risks. It is therefore important to see clearly and to make the most of the economic opportunity facing Canadians.

In recent decades, the Canadian oil and gas industry has become one of the largest in the world. Today, Canada is the fourth largest net energy exporter and the sixth largest producer in the world.(3) Nationally, the energy sector directly or indirectly employs over 830,000 workers, and accounts for around 10% of our GDP.(4)

Furthermore, over the past five years, the federal government collected an average of $14 billion a year from the oil and gas industry. To put it in perspective, this tax revenue totals more than half of the sum of all provincial deficits during the pandemic.(5) The economic vitality of this sector has also allowed Canadian oil and gas companies to invest heavily in research and development, reducing greenhouse gas emissions per barrel of oil from the oil sands by 36% between 2000 and 2018.(6) Despite regulatory and political obstacles, and those related to global economic circumstances, Canada’s oil and gas industry has always been able to lift itself up and continue to grow. Canadian families benefit from a strong and financially stable energy sector, and we owe it to ourselves to maintain it.​

Contrary to what certain lobby groups claim, pipelines are the safest and most environmentally friendly way for Canada to transport fuel. A rigorous, time-tested national process has been developed in order to minimize the risks, environmental and other, involved in transporting fuel by pipeline.

This is the role of the Canada Energy Regulator (CER),(7) which regulates pipelines throughout their life cycle—from design to evaluating approval requests, to construction and use, and through to abandonment.(8) According to the Pipeline Safety Act, polluters are held financially responsible for any costs and damages they cause to the environment.(9) In addition, companies in violation of the law are subject to fines of up to a million dollars and penalties including imprisonment of from one to five years.

These provisions have encouraged companies to implement concrete safety measures. Pipelines are now monitored at all times from centralized control centers that gather pressure, volume, and other information in real time.(10) It is thanks to these measures, among others, that pipeline projects have become so safe.

Pipeline spills, leaks, and ruptures are now extremely rare. On average, over 99.99% of the oil transported by federally regulated pipeline is transported safely every year.(11) When there are oil spills, these are very minor and typically confined to the area of the pipeline, and the oil is recovered during cleanup operations. In fact, according to the CER, it is roughly the equivalent of just two tank cars that are spilled each year in Canada.(12)

In comparison, in February 2020, a single derailment spilled 1.2 million litres of oil in Saskatchewan,(13) the equivalent of about seven times the total amount of oil spilled by pipelines each year. Not to mention that transporting fuel by pipeline emits from 61% to 77% fewer GHGs than transport by rail.(14) Moreover, there have been no fatal accidents directly resulting from the operation of a federally regulated pipeline system since 1990.(15)

The point is not to call into question the relevance or the security of transporting fuel by train, ship, or truck, but rather to highlight the benefits associated with pipelines and to show that new pipeline projects in no way compromise our safety or the protection of our natural environment.

When Canada or the United States cancels a pipeline project, as with the Keystone XL project, or when a project like Energy East falls through, it is not the case that the barrels of oil that these pipelines would have transported are simply not produced. In fact, while some portion may not be produced, another portion will potentially be moved instead by train, truck, or ship.

In the specific case of Keystone XL, which was to transport Alberta oil toward refineries in the southern United States, those refineries have stated that they will need to turn, in part, to imports from less politically stable countries, notably in Latin America and the Middle East. The rest will be produced directly in the United States or imported from Canada by other methods of transport.

Moreover, the Organization of the Petroleum Exporting Countries (OPEC) predicts that the global demand for oil will increase by around 9% by 2045,(16) while that of OECD member countries in the Americas,(17) mainly the United States, will decrease by over 20%. Yet 98% of Canadian oil exports are sent to our southern neighbour.(18)

Putting all of its eggs in the same basket is therefore a risky strategy for Canada, which should reconsider its export strategy. The different levels of government should make it easier to build new pipelines in Canada in order to put in place the infrastructure required to diversify our oil exports.

Several world markets will experience substantial growth in oil demand by 2045, as can be seen in Figure 1. Demand will surge by 130% in India, and by more than 40% in a number of other Asian countries. This is a golden opportunity for Canada not only to increase the value of its exports, but also to change its risky, one-client strategy. 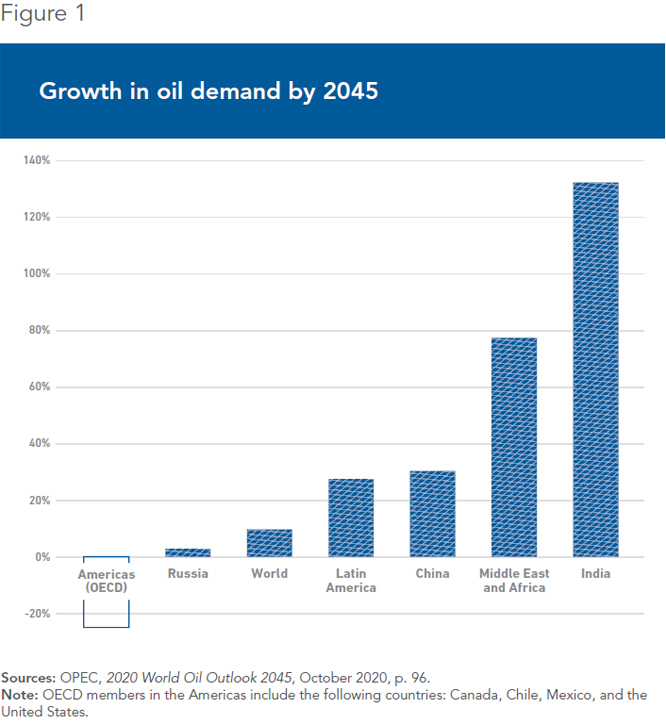 Right now in Canada, two significant oil pipeline projects are underway, namely the Trans Mountain expansion and the replacement of Enbridge’s Line 3 pipeline. These two projects alone will create infrastructure with the capacity to increase our exports by approximately 12%.(19) Table 1 shows their scope in terms of export volumes and the monetary value associated with them. Two other projects are also included in the table, namely Energy East and Keystone XL. While these have been cancelled, it is important to understand the sums we are losing every day.

According to our calculations,(20) if all four projects had gone ahead, this infrastructure would have had the capacity to generate over $146 million a day in exports for Canada. This estimate is a prudent one, as it does not include the various taxes collected, royalties, and other revenues associated with the running of these pipelines. Moreover, the value of exports is a function of the price of a barrel of oil, and numerous analysts(21) estimate that this price will rise in the medium term. Expanding our exports to other clients would also allow us to get the most for each barrel and potentially raise their total value.

In addition to illustrating the considerable economic potential of increasing our exports, these projections also reveal the costs of not moving Western oil toward the country’s east coast, as Energy East could have done. The main infrastructure currently ends at Montreal, leading refineries in the Maritime provinces to import a substantial portion of their oil from Saudi Arabia. Of course, even with a pipeline, these refineries would surely continue to import some oil from other countries in order to diversify their sources, but the region would be able to consume more Canadian oil and contribute to the growth of our energy sector.

It would therefore be in Canada’s interests to reconsider its pipeline strategy by focusing on two points. The first would be to encourage the construction of new pipelines allowing us to increase our exports toward new markets in order to diversify Canada’s client mix. The second would be to promote projects that move oil from west to east for domestic consumption.

It should be noted that such a revised strategy also applies to natural gas pipeline projects, and to future pipeline projects for transporting hydrogen. For example, endangering infrastructure like Enbridge’s Line 5, which transports both oil and natural gas, would also have devastating economic effects. Canada’s economic vision for its energy sector must change. The country needs to be focused on the future and open to the opportunities that arise.

Canada is responsible for just 1.6% of all GHG emissions in the world, and oil sands emissions per barrel fell by 36% between 2000 and 2018.(22) Our governments and the industry are making constant efforts to improve Canada’s environmental record, all while investing billions of dollars into research and development for the creation of greener technologies.

These efforts are entirely compatible with the economic opportunity represented by the building of new pipelines. New infrastructure would maximize the volume of fuels transported by the safest, greenest means, replace imports from other countries with oil from a Canadian industry that is responsible and ethical, and finally diversify our exports while generating billions of dollars a year in economic benefits which will, among other things, help refill government coffers.

In order to get there from here, we recommend that policy-makers at different levels of government: