The Competition Bureau submitted its report on March 27, 2020 coming out against Air Canada’s proposed acquisition of Air Transat, which has otherwise already been approved by shareholders. While the airline industry is being battered by the coronavirus pandemic, this publication by the MEI shows that a dynamic understanding of competition mechanisms argues in favour of the transaction.

This Economic Note was prepared by Gaël Campan, Senior Economist at the MEI. The MEI’s Regulation Series aims to examine the often unintended consequences for individuals and businesses of various laws and rules, in contrast with their stated goals.

The recent decision by the Competition Bureau of Canada to oppose the proposed acquisition of Air Transat by Air Canada illustrates once again the theoretical pitfalls of the static antitrust doctrine that regulators rely on. According to the Bureau, “Air Canada’s proposed acquisition of Transat is likely to result in a substantial lessening or prevention of competition.”(1)

After exposing the flaws in the notions underpinning the regulator’s decision, we will explain the economic constraints faced by airlines and their need to reach a critical size to be able to compete in the international arena. Air Canada’s friendly acquisition of Air Transat is a step in this direction and would be beneficial to Canadian consumers.

The Problem with Conventional Antitrust Theory

Antitrust regulators and prosecutors rely on a few theoretical preconceptions in establishing whether a player has a “dominant” position in its market and therefore whether it should be broken up, or alternatively, whether a merger or acquisition should be allowed to happen.

Among these is the idea that markets should follow a certain rivalry pattern in order to qualify as “efficient” or “fair,” and that excessive market concentration necessarily has harmful effects for consumers. Hence, antitrust doctrine primarily concerns itself with the market share of participants and their capacity to use their “market power” to compete unfairly and impose prices that are higher than what would obtain in an ideal competitive market.

This conventional approach is misconstrued because markets do not actually have stable, finite boundaries. Consumers decide in practice which goods or services are substitutable, and change their minds whenever new opportunities arise. Market share measurements vary considerably with the range of substitutable products under consideration. Where to place artificial limits around a given market to measure its competitive intensity is ultimately an arbitrary decision.

This is most obvious when innovative breakthroughs bring about brand new customer behaviours. When the Walkman was first introduced, there was nothing remotely similar on the market. Consumers had to forgo—substitute—a varied basket of goods and services in order to buy one. According to antitrust doctrine, Sony had for a time a monopoly on personal portable music players, and every company with a similarly unique advantage is a candidate for antitrust scrutiny.

Moreover, consolidation is often required to achieve economies of scale.(2) Benefits from higher volume—lower cost of production per unit—usually get passed on to consumers, as downward price trends show.(3) The leading producer of a given commodity cannot raise its price with impunity.(4) Apart from triggering product substitution, this would invite new rivals able to make a profit at the higher price.(5) Without legal barriers to entry, the threat of potential rivalry is very real and exerts true competitive pressure.(6)

True competitive intensity is in the eye of the consumer. A company’s bottom line grows faster than others as long as its customers believe it holds a unique competitive advantage over its rivals. The bigger the perceived value differential, the more that firm can increase its price. But as its price rises, the cost of forgone consumption rises too, until it is simply not worth it anymore. From this perspective, fears of abuse appear groundless.

Competition in the Airline Industry

The airline industry has undergone a massive transformation over the past 40 years. It used to be a protected business environment providing “point-to-point” service. Airfares and percentages of occupied seats were regulated, margins were guaranteed, and competition was restricted. Air travel used to be an elite service for businesses and the wealthy, but the industry now serves the masses of middle-class consumers.

After deregulation, air transport proved to be a cutthroat business. Hundreds of companies tried it, but very few were successful.(7) Flight operating costs are fixed for the most part in the short term. Airlines must sell as many seats as possible at the highest affordable price. Meanwhile, demand can be randomly disrupted by geopolitical events, and internet flight aggregators have increased consumers’ price awareness and sensitivity.

The companies that survived developed the cost-effective “hub and spoke” organizational model (see Figure 1) to cope with the need for maximum load in a price-sensitive world with international rivals.(8) A handful of large airports (hubs) became gateways to both domestic and international travel. While allowing for higher capacity loads, hubs also concentrate a wider range of services, which limits costly duplication.(9) Some unprofitable regional connections were abandoned until low-cost airlines emerged to offer secondary airports another lease on life by providing connections at more affordable prices.(10)​ 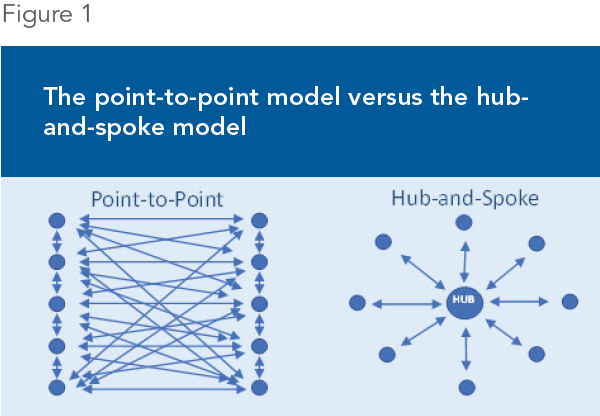 Competitive pressure and constrained profitability required airlines to join forces (through M&A or alliances) in order to feed the hubs and optimize seat occupation. As a result, merged airlines came to have a higher share of seats at specific airports they chose as their hubs, to the point where 93 of the top 100 airports in the world now have one or two airlines accounting for a majority of their seat capacity.(11)

Noticeably, most of the savings from this intense competition and consolidation have been passed on to passengers worldwide. Ticket prices have fallen by over 60% globally since industry deregulation in the 1970s.(12) Beyond price, flight frequency, traveling time, service experience, and security all improved as well.(13) Hubs became luxury malls with food courts and duty-free shops, while in-flight service made entertainment available on-demand.(14) Market segmentation was refined with discount airlines offering unbundled service, starting with bare tickets and charging optional fees for everything else. As a result, customers’ choice of price, comfort, dates, and travel duration combinations is larger than ever.(15)

Despite all these advantages, competition regulators continue to associate the reduction of the number of airlines with an erosion of rivalry intensity. In their static approach to competition, fewer players always means that prices are higher than they should be, irrespective of previous price reductions, service quality enhancements, frequency levels, increases in the number of routes, etc., and regardless of the existence of both actual and potential rivals.(16)

The extreme approach taken by Canada’s Competition Bureau to abuse of dominant position illustrates how regulators can misconstrue market dynamics. Taken literally, its market definition is very restrictive. A single product in a single location qualifies as a market. A 5% price increase sustained over 12 months qualifies as potentially monopolistic behavior.(17)

Applied to the airline industry, a single route—say, Montreal to Paris—would constitute a market. Any sustainable price increase on such route could be caused by a change in passengers’ preferences due to service innovation, such as better amenities or selling access to the fast lane at security or immigration. Determining the boundaries from which to assess the intensity of competition within and between multiple hubs is far more complex than looking at one product in one location. In the absence of legal barriers to entry, market share is earned by providing better value for money, and is under constant competitive pressure.

The Rationale behind Air Canada’s Acquisition of Air Transat

Canadian airlines and airports developed following the same “hub and spoke” model as the rest of the world. Air Canada and Air Transat compete globally with other international carriers which have scheduled routes to and from all major Canadian airports. Typically, Air Canada handles about half the traffic going through Vancouver, Toronto, and Montreal.

Air Canada’s announcement of its intention to buy Air Transat raised concerns about future route concentration at Canadian airports, but the increase will mostly be seen at Trudeau airport in Montreal (see Figure 2). In any case, high capacity share at hubs is the industry standard, and Air Canada is not currently on par with leading global carriers. 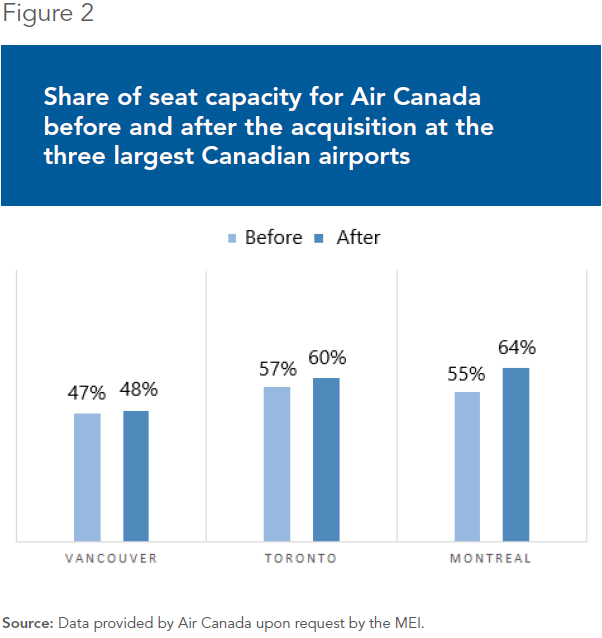 Air Canada would serve 58% of transatlantic air travel from Canada once Air Transat’s share of seats to Europe were added to its 43% share.(18) However, one-way routes are not the proper way to measure competition intensity. In order to load its planes in other countries, Air Canada must offer internationally competitive service. That means good quality at affordable prices. Increasing its share at its own hubs improves its seat occupancy rate and decreases operating costs per seat, thereby making room for further price reductions.(19)

Air Canada needs a strong home base to compete effectively on outgoing flights to Europe and sun destinations, and in order to attract more passengers away from competitors’ hubs the same way they do at Canadian hubs. As a matter of fact, there are so many airlines picking up passengers in North America to bring them to Europe that the leading carriers are only able to serve about 10% of total seat capacity to the old continent. Air Canada’s acquisition of Air Transat would only help bring its share of transatlantic seats closer to North American industry leaders, at 9%.

Similarly, Air Canada’s share of seats to sunny destinations—a growing market and an Air Transat strength—would rise from 24% to 46% after the acquisition. Seasonal routes would become more profitable, and some would be extended to year-round through adequate matching of aircraft and destination. Air Canada’s ability to compete with the leading specialized airlines (such as Sunwing) would be improved.

Once again, increasing share at hubs does not hinder competition because there are virtually no legal barriers to entry. Discount companies are offering better prices on several destinations. Potential rivals are already preparing to join the low-cost long-haul battle. In order to stay competitive, Air Canada would be compelled to pass on most of the savings derived from the acquisition to passengers.

In the air travel industry, a high share of seat capacity at hubs is a precondition for competing globally, not a license to dominate locally. After acquiring Air Transat, Air Canada would remain a modest group compared to global carriers and global hubs. But the airline would have a better fighting chance in the global arena as its ability to compete and thrive would be enhanced.

The unprecedented crisis triggered by COVID-19 is having a very acute impact on the airline industry as well as the entire travel industry. In this context, preventing Air Transat from joining a partner in a stronger financial position, namely Air Canada, would be an irresponsible decision that the federal minister of transport simply can’t afford to make. Indeed, such a decision would threaten the very survival of Air Transat, which would not benefit passengers at all, while increasing the chances that recent layoffs become permanent.