This Viewpoint was prepared by Miguel Ouellette, Associate Researcher at the MEI, and Luc Vallée, Chief Operating Officer & Chief Economist of the MEI. The MEI’s Education Series aims to explore the extent to which greater institutional autonomy and freedom of choice for students and parents lead to improvements in the quality of educational services.

From 2006 to 2016, while the number of students in Quebec public schools fell by 3.6%, total spending on education increased 14.1%, accounting for inflation.(1) In other words, real spending per student increased by 18.4% in ten years.(2)

If the Department of Education was already struggling to control costs while the number of students was falling, it’s easy to anticipate what will happen when this number increases substantially. Indeed, the arrival of new students implies increased spending on infrastructure, staff, and adapted resources, among other things.

The number of students has in fact started growing again since 2016, and the government’s demographers estimate that it will increase about another 7% over the next five years.(3) Education spending will thus grow considerably. And as shown in Figure 1, the government is expecting to have to add $1.7 billion to the increases already budgeted for preschool, primary, and secondary education over the next five years, mainly in direct student services.(4) That’s not counting additional infrastructure spending, which must be added to the total. 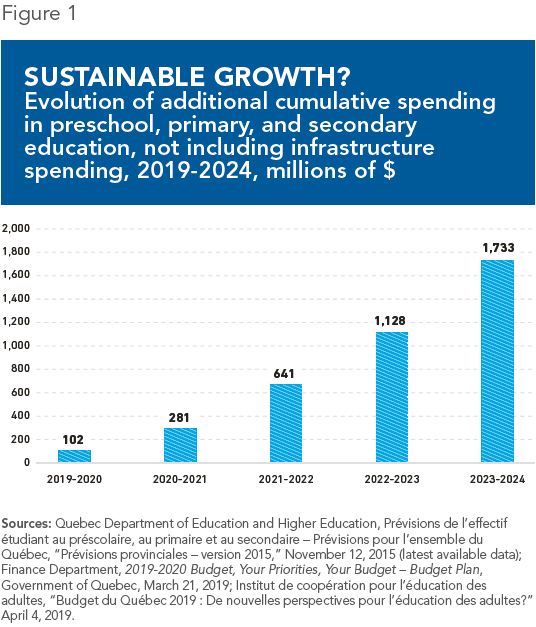 Since we know that spending will increase and we are constantly looking for ways to improve the quality of education, it makes sense to ask ourselves if we can come up with solutions that are more effective and less expensive.

Thankfully, there are some good examples from elsewhere in the world to guide us in designing our education policies. Other countries have indeed addressed the problems that concern us by implementing audacious reforms to control spending all while improving student outcomes. Quebec should learn from these experiences.

Improving Quality All While Controlling Spending

A number of European countries allow a large amount of freedom in the choice of schools by funding different kinds of establishments, public and private.(5) During the 1980s and 1990s, Chile and Sweden also went down this path, adopting pragmatic reforms favouring competition between schools,(6) to the benefit of students, as well as a more efficient allocation of resources.

For example, in Sweden, there has existed since 1992 a “school voucher” system: Schools receive a certain amount for each student they succeed in attracting.(7) This freedom of choice means that public schools are in direct competition with one another. Administrators therefore have an interest in improving, and in finding new ways to satisfy the needs of students and their parents, since these are free to choose another school.

The reform of the education sector in Sweden led to a general improvement in the academic performance of students, in addition to increasing the number of university registrations and the average number of years of study. Further-more, over the decade following the reform, students who attended an independent school generally performed better than their public school colleagues. Finally, the government also succeeded in better controlling education spending.(10)

In many regions of Quebec, public schools (which are exclusively managed by the government) are quasi-monopolies and become parents’ default option. Even when there are several public schools close together, students are assigned to their neighbourhood school, unless an exemption is requested. There is no guarantee that such an exemption will be granted, or renewed.

This very limited freedom of choice prevents competition from fully playing its role as the engine of innovation. Given that parents cannot freely choose which school their children attend, and that the money only partly follows the student, school administrators and school boards have less incentive to find ways to reduce costs while also improving the quality of services offered, even though some do succeed in managing their resources relatively well.

Encouraging competition between schools by adopting a voucher system and by entrusting the administration of certain public schools to the private sector would help improve the quality of education and also promote better cost control. If the Quebec government really wants to make education a priority, this kind of reform would improve the future prospects of our youths, all while providing greater freedom of choice.