This Viewpoint was prepared by Vincent Geloso, Associate Researcher at the MEI. The MEI’s Regulation Series aims to examine the often unintended consequences for individuals and businesses of various laws and rules, in contrast with their stated goals.

It is not the role of the MEI to support or criticize any particular transaction. However, for the sake of economic education, it is useful to clarify the concepts of competition and of dominant market position, which are generally very poorly understood. In fact, both economic theory and empirical evidence suggest that it is barriers to competition—especially those erected by governments to protect incumbent firms—rather than the size and the number of firms in a market that are cause for concern.

The notion that firms with large market shares hurt consumers is based on the confusion of cause and effect. Firms with significant market shares may have managed to reach their position by being more efficient than other firms at increasing the quality of their products and reducing costs and thus prices.(1) When this is the case, high levels of concentration are not problematic for consumers—quite the contrary, as this entails access to cheaper goods of higher quality.(2) More importantly, as economists frequently emphasize, large market shares and the promise of substantial profits act as bait for innovators.(3) Thus, large market shares are actually a sign of gains for consumers through innovation.

This is why economists have moved away from measuring competition merely through market shares or the number of firms in a given market. Instead, they tend to emphasize the “threat” of competition for established companies. A firm that innovated faster than its competitors, allowing it to reduce prices and gain the loyalty of a vast majority of consumers, will continue to act in a competitive manner if it fears entry by new players within the industry or by others that will invent new products and make its own products obsolete.(4) If a large incumbent firm actually raises prices, it will end up encouraging market entry. As such, it is barriers to entry that are relevant for consumer welfare, not the number of firms in a market.(5)

Even though these barriers may be inherent to products themselves, competition through the invention of new products limits their importance. More pernicious (and persistent) are regulatory barriers. This can be seen in the case of airline competition today. Indeed, the Canada Transportation Act explicitly limits foreign competition, prohibiting non-Canadian carriers from carrying passengers between Canadian cities.(6) This means that a European carrier cannot take on passengers in Toronto, drop them off in Montreal, and pick up new passengers there before heading to Europe. This is a barrier to competition—one that does not stem from the market, but rather from government policies.

The concern about market dominance is also not well supported empirically. In the United States, in the decade before the first competition law was passed in the late 19th century, the big companies that were accused of hurting consumers actually lowered their prices significantly faster than the economy as a whole (see Table 1), while outpacing increases in the quantity of goods produced.(7) Most of these industries managed to achieve large market shares through innovation and price reduction. Similar evidence has recently been uncovered for Canada in the decade prior to the adoption of its own competition law, and for Quebec with regard to the electricity market before nationalization.(8) 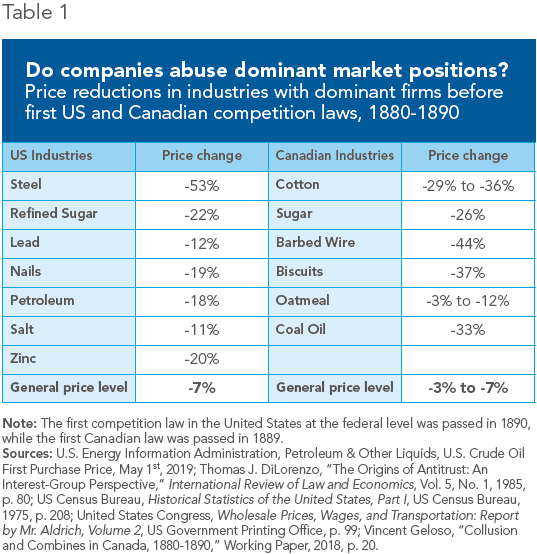 The economic history literature also yields important examples about cases where firms tried and failed to abuse their dominant status. For example, the whiskey industry experienced a famous price war, whose purpose was to sell below cost in order to drive out competitors in order to then raise prices.(9) The attempt failed spectacularly. There were few barriers to entry, which meant that once the big firms started increasing prices again, new firms entered the market and won market shares from the financially strained incumbents.​

In fact, when cases of large firms abusing their consumers are confirmed, it is frequently with the help of governments. One of the best documented cases is that of the sugar industry from the late 19th century to the early 20th century,(10) which benefitted heavily from trade tariffs that curtailed imports. Similar evidence exists regarding the airline industry. For example, before the mid-1970s, the American industry was cartelized by government regulations explicitly designed to limit competition.(11) With lower threat of entry, air carriers were less compelled to reduce their prices. It is only after the legal barriers to competition were removed in 1978 that prices began falling.(12)

In sum, those who are concerned with consumer welfare should concern themselves more with artificial barriers to entry and competition than with the size and the number of firms in a given market.