This Viewpoint was prepared by Mathieu Bédard, Economist at the MEI. The MEI’s Regulation Series aims to examine the often unintended consequences for individuals and businesses of various laws and rules, in contrast with their stated goals.

We are constantly told that there is a shortage of labour in Canada. In 2018, the economy added 163,000 full-time jobs, and the unemployment rate fell to 5.6%, a historic low that can be qualified as full employment.(1) The participation rate for people of prime working age, 25 to 54 years, is 87%.(2) The winds are shifting on the labour market. Employers used to have the upper hand; now, it’s workers who have it.

A labour shortage should lead to higher wages through the simple application of the law of supply and demand.(3) When there’s a potato shortage, their price goes up. Normally, the same thing happens on the labour market, but that’s not what is happening right now in Canada. While wages did go up in 2018, the increase was slight: Hourly rates grew by 2.9%. That’s more than the inflation rate, which was 2.3%,(4) but a much bigger increase could have been expected, given the crisis described by the media.

Provincial data paint a similar picture. The most severe labour shortage by far is in British Columbia, whether we look at the unemployment rate (4.7%) or the job vacancy rate (4.5%).(5) Ontario, New Brunswick, and Quebec are also places where the lack of workers to fill positions is being felt, to varying degrees of intensity.

The regulation of the labour market undoubtedly plays a significant role. Government-imposed barriers to employment result in a lack of correspondence between the skills sought by employers and those on offer in the market, which reduces the pool of available employees.

If some regulation of professions is not shocking at first glance in certain sectors—for example the health care sector—it seems more difficult to justify in other fields. In 2010, nearly 13% of Canadian private sector workers aged 18 to 60 were covered by a system of occupational licensing. According to a 2014 study based on the National Occupational Classification, 127 occupations in Canada were regulated in at least one province, by a total of over 400 supervisory bodies.(6) These occupations ranged from tile setter in Quebec to cook in Saskatchewan. Such regulation has the effect of artificially limiting the number of people who can fill such positions.

It is therefore not surprising that the provinces with the biggest labour shortages also tend to be the ones with the most rigid labour laws.(7)

Yet salaries in these provinces did not go up radically in 2018 (see Table 1). Even the increase in the average hourly rate of 4.1% in British Columbia, by far the highest in Canada, seems low given the intensity of the shortage and compared to the inflation rate, which was 2.7%.(8) In Quebec, the increase in the hourly wage in 2018 was even less impressive, at 1.9%. That’s far less than the 2016 and 2017 increases, which were respectively 2.8% and 2.9%.(9) It’s also barely higher than the increase in the general price level, which was 1.7% in 2018. 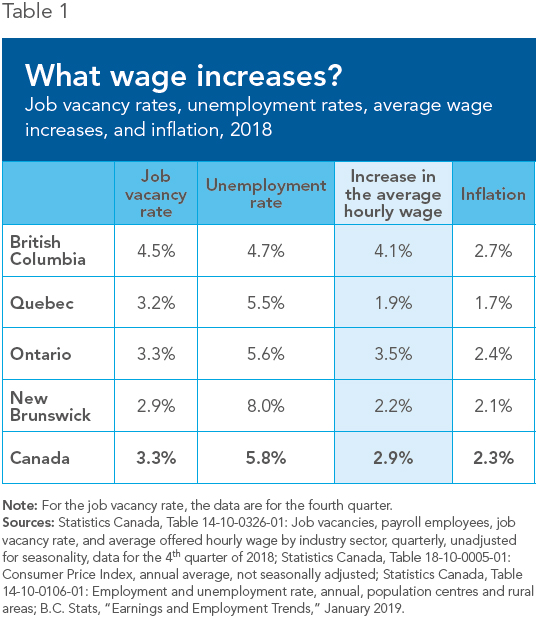 Why have salaries not increased more rapidly? Several explanations are regularly suggested. One of these invokes technological innovation, alleging that it limits what workers can demand in terms of wages, since they can be replaced more easily by machines. Another explanation is based on certain fears workers have regarding a possible recession to come, which would keep them from leaving their current jobs. A third hypothesis holds that there are more workers available than the unemployment rate would suggest.(10) Public policies also play a role.

We tend to overlook the effect of interprovincial trade barriers and of the tax burden, both of which undermine the productivity of workers.

Productivity and wages improve through better equipment (via investment) or better organization due to more specialization. Both of these allow workers to be more productive by producing more goods and services more quickly, which allows companies to pay higher salaries.

Obstacles to trade between the provinces take the form of rules that make trade more difficult, by limiting it or even by preventing it.(11) They thus hinder the division of labour that would naturally operate between workers located in different provinces, making our economy less efficient.(12)

Indeed, the rules that restrict trade act like a tariff imposed on a country’s internal trade. Statistics Canada measured this “border effect” and concluded that it corresponded to the equivalent of a 6.9% tariff imposed on interprovincial trade,(13) which is higher than the average tariff rate as measured by the World Bank, including countries that do not even have free trade agreements between them.(14)

The tax burden, for its part, weighs heavily on investment and slows the accumulation of wealth, for individuals and for companies, thus reducing the amount of capital there is to invest.(15) The provinces where the labour shortage is the worst, and where salaries are the slowest to react, are also provinces where this burden is high.(16)

The regulatory barriers that act like tariffs, as well as the tax burden, keep Canadian workers from earning as much as they should. A less regulated and less taxed economy, with freer trade, would benefit workers by allowing them to be more productive, which would lead in turn to them being better paid.