Quebec Premier François Legault has often stated his desire to attract foreign investment into the province and to increase Quebecers’ standard of living. An essential precondition for this is to create an economic environment that is more favourable to productivity growth, considered by economists to be the main determinant of rising living standards in the long term. This can be achieved by reducing the amount of room taken up by the government in the economy, through a decrease in public spending.

This Viewpoint was prepared by Maher Gordah, Economist at the MEI, and Germain Belzile, Senior Associate Researcher at the MEI. The MEI’s Taxation Series aims to shine a light on the fiscal policies of governments and to study their effect on economic growth and the standard of living of citizens.

Quebec Premier François Legault has often stated his desire to attract foreign investment into the province and to increase Quebecers’ standard of living. An essential precondition for this is to create an economic environment that is more favourable to productivity growth, considered by economists to be the main determinant of rising living standards in the long term. This can be achieved by reducing the amount of room taken up by the government in the economy, through a decrease in public spending.​

Quebec’s living standards have been declining, relatively speaking. Between 1981 and 2016, Quebec registered one of the weakest annual growth rates in living standards (1.2%) among industrialized countries, according to HEC Montréal’s Centre for Productivity and Prosperity (CPP). In 2016, the province also ranked near the bottom of the pack in a comparison of thirty countries and provinces in terms of living standard, or GDP per capita, adjusted for purchasing power parity. Only the Maritimes, South Korea, and Spain ranked lower.(1)

Quebec is also a big spender. If we look at public spending as a share of the economy, specifically mission spending (which is to say, excluding interest payments on the debt), we note that this represented 22.6% of provincial GDP in 2017-2018, whereas the Canadian average was 18.7%, using a comparable measure.(2) This difference of a few percentage points is considerable; it means that proportional to the size of its economy, Quebec spends around 21% more than the Canadian provincial average.

On this point, a 2016 OECD study(3) provided empirical evidence that the least dynamic economies, which is to say those with the lowest GDP growth rates, are those whose governments intervene and spend the most (for example, France, Greece, and Italy). The study notes the negative impact of certain types of public spending, meant to stimulate the economy, on long-term potential growth. It points out, among other things, that the granting of subsidies to the least competitive businesses causes the most economic damage.(4) Indeed, corporate subsidies are not, generally speaking, an effective recipe for economic growth; while Quebec makes greater use of this approach than most other provinces, this has not led to a higher level of wealth.(5)

According to economic research, the rate of growth starts to slow when government spending exceeds 26% of GDP.(6) In Canada as a whole, government represents around 41% of GDP, while for Quebec, the corresponding ratio is 52%.(7) Government thus takes up nearly 27% more space in the province’s economy, compared to the Canadian average.(8)

Such a level of spending and intervention in the economy undermines the potential productivity gains that are necessary for sustainable economic growth, which is itself a necessary condition for raising the living standards of the Quebec population.

Opting for a big-spending government thus ends up reducing the standard of living of Quebecers. Statistical data compiled by the CPP for the year 2017 show that the standard of living of Quebecers could have been far higher, and closer to that of other prosperous jurisdictions, had productivity growth been comparable to that of Sweden, for example (see Figure 1). Indeed, while Quebec’s productivity grew 1.2% per year on average between 1981 and 2016, Sweden’s grew 1.7%. This gap of 0.5 percentage points may seem small, but it leads to a considerable shortfall after 35 years: had our productivity grown at the same rate as Sweden’s, the average annual income of Quebecers would be $60,540 today instead of $47,443, or 28% higher. 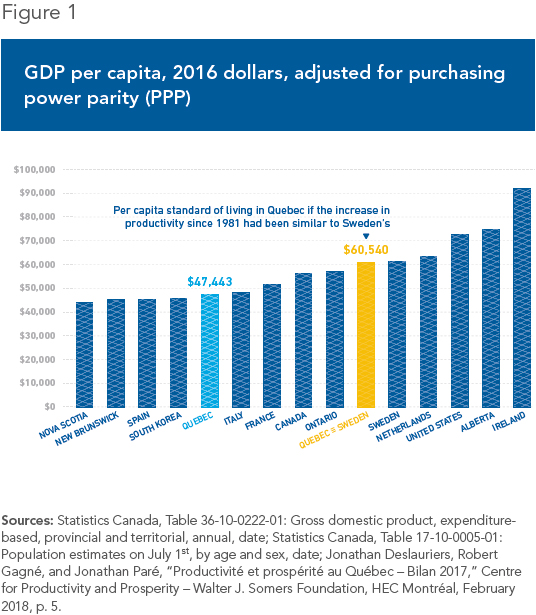 The main factors necessary for productivity growth are private investment and innovation, the former being a prerequisite for the latter. Innovation entails performance improvements for equipment and workers, which ends up increasing the salaries and purchasing power of those workers. Putting measures in place that will attract foreign investment and encourage private investment in research and development should therefore be at the heart of any strategy aiming to increase Quebecers’ standard of living.

The first such measure to consider is the reduction of the tax burden, starting with those that affect businesses. When taxes are high, there are fewer entrepreneurs, and fewer businesses are created, which in turn means that less wealth is created.(9) Moreover, since the corporate income tax reduces the profitability of investments, increasing its rate encourages investors to look elsewhere when deciding where to place their money, which undermines productivity growth.

It is also important to reduce the tax burden for individuals, so that the wage increases stemming from productivity gains benefit workers instead of being captured by government. Such a reduction of the tax burden implies that government must make choices and reduce a portion of its spending.

Quebecers’ declining relative standard of living is not an unavoidable fact of life. It can be reversed by wealth-creating public policies that end up raising the standard of living. In particular, government should encourage private investment and innovation, not through public spending but by adopting a more effective approach, namely spending less and intervening less in the economy.