This Economic Note was prepared by Mathieu Bédard, Economist at the MEI, with the collaboration of Kevin Brookes, Public Policy Analyst at the MEI. The MEI’s Taxation Series aims to shine a light on the fiscal policies of governments and to study their effect on economic growth and the standard of living of citizens.

Up until recently, Canada had a clear advantage over the United States in terms of corporate taxation. The average combined (federal and state) corporate income tax rate was 39% in the US, versus just 27% here (federal and provincial). In 2018, however, the combined American rate fell to 26%, just below the Canadian rate.(1) To this must be added the American government’s deregulation efforts, the full scope of which many people have yet to realize, and which make their economy much more welcoming.

This loss of Canadian competitiveness has been recognized by a range of experts, as has the need for a response. These include the Advisory Council on Economic Growth (put in place by the federal government itself), the International Monetary Fund, and the OECD.(2) The federal government’s inaction could lead investors who are hesitating between Canadian and American projects to judge the latter to be more attractive. Already, non-residential business investment in Canada is lagging considerably behind compared to other industrialized countries.(3)

Among the different kinds of taxes, the corporate income tax is one of the ones that have the most adverse effects on the economy. It acts directly on the decisions of investors and entrepreneurs by making projects less profitable, and therefore reduces growth, job creation, and wage increases. That’s why many tax specialists think that the best way for Canada to address its competitiveness problem is to reduce the corporate tax burden, among other things by reducing the corporate income tax rate.(4)

The effort that needs to be made is not just a federal responsibility. The provinces also collect corporate income taxes, at a rate which ranges from 11.5% in Ontario up to 16% in Prince Edward Island and Nova Scotia.(5) In comparison, no US state taxes corporate income at a higher rate than 12%, and some have a rate of 0%,(6) including states that are in direct competition with regions of Canada to attract large scale investment. This is the case in Texas, for example.

Indeed, since 2012, most countries with economies that are comparable to Canada’s have reduced their corporate income tax rate (see Figure 1).(7) There will likely be other cuts in the coming years, as the International Monetary Fund estimates that the reduction of the American federal rate will entail an average cut of one to three percentage points globally in the short and medium term. In the long term, these reductions could be even larger.(8)​ 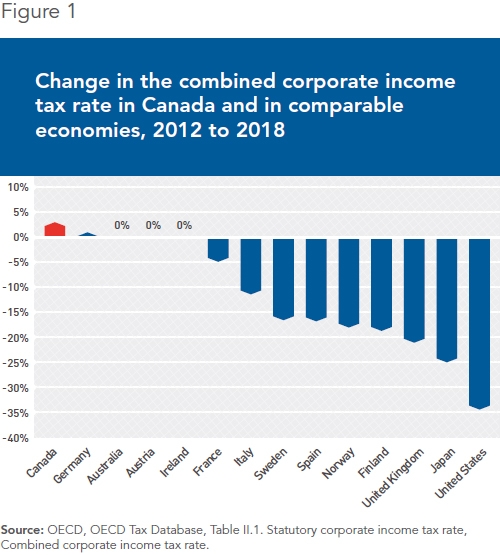 Does Canada Have Room to Manoeuvre?

Can Canada afford to lower corporate income taxes? In a recent report, the Parliamentary Budget Officer estimated that Ottawa’s current fiscal policy is sustainable over the long term, despite recent and projected deficits. The government could even afford to reduce its revenues by $29 billion and still maintain the relative size of the public debt, which corresponds to 31% of GDP.(9) Total revenues from the corporate income tax amounted to $45 billion in 2017 (see Figure 2). There thus exists, at least at the federal level, significant room to manoeuvre. 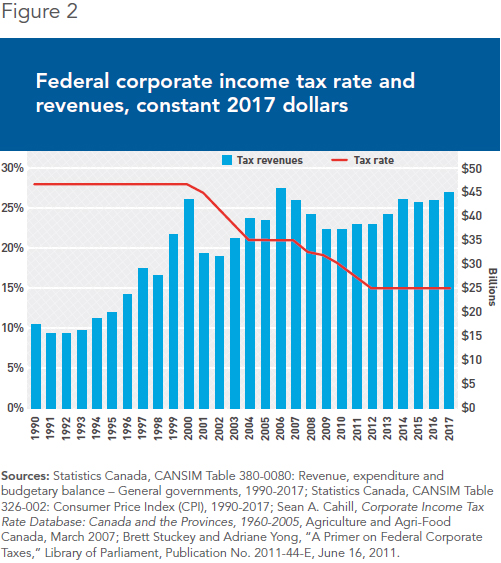 The same cannot be said of the provinces, since the only one whose fiscal policies are currently sustainable is Quebec.(10) However, the lack of wiggle room does not constitute, even for the rest of the provinces, an obstacle to a corporate income tax cut, as shown by recent Canadian history.

In 2001, the Liberal government of the day began lowering the federal corporate income tax rate from its long-time plateau of 28%. Through a series of successive reductions, it fell to 21% in 2004. Then, in 2006, the Conservative government further lowered the rate until it finally reached 15% in 2012.(11)

Despite this substantial tax rate cut—by almost half in just over ten years—tax revenues have held up remarkably well since the first year of the reform. (Due to the bursting of the dotcom bubble, tax revenues had tumbled to $32.3 billion in 2001, from $43.4 billion in 2000.) Subsequently, revenues rebounded, and have remained stable, despite the ups and downs of the financial crisis and the oil price bust, which had a pronounced effect on the Canadian economy. This is due in no small part to the fact that, as expected, the tax cuts led to more business investment and more economic growth, not to mention higher wages.

Corporate income tax revenues as a share of GDP have thus remained fairly constant and, despite economic difficulties, represented between 3% and 4% of GDP. A major reduction in the corporate tax rate therefore does not necessarily lead to a corresponding drop in tax revenues or a worsening of the fiscal situation.

Economist Arthur Laffer had suggested that the Reagan tax cuts of the 1980s would not diminish government revenues nearly as much as some were predicting. This was due to the fact that the prevailing tax rates were high enough to discourage some economic activity, and reducing them would therefore spur additional activity, which would be taxed.(12) Laffer was right, as fiscal revenues quickly rebounded to their initial level.(13) His insight also explains what followed the Canadian corporate income tax cut from 2001 to 2012—and provides a solution to the competitiveness problem stemming from our tax rate now being higher than the American rate.

One reason for the significant increase in corporate income in Canada is precisely that the tax cut stimulated private investment, which picked up after 2000 following a miserable performance in the 1990s.(14) As corporate income taxes reduce the profitability of investments, raising this tax rate encourages investors to look elsewhere when deciding where to place their funds, or simply to forego their plans. The inverse is also true.

Thus, private investment rose from about 10.5% to 13% as a share of GDP from 2001 to 2012. This was, of course, partly due to the commodity boom, but also to the improved fiscal climate for investment. This increased investment showed up in the majority of sectors, but the services sector benefited the most from the tax reform, since its effective tax rate decreased the most. (The manufacturing and processing sector used to be favoured by a lower tax rate, which was phased out in 2004.)(15)

A question that arises is whether this Laffer effect is attributable to growth, or to income being shifted, including multinationals repatriating their profits from foreign operations. It is not easy to provide a definitive answer to this question, but both effects are probably present.

For example, taxable corporate income, as a share of GDP, has been steadily trending upward even in recessionary years. This is consistent with the idea that profits from the overseas operations of large corporations were being repatriated to Canada throughout the 2000s in order to benefit from the Canadian rate, increasingly competitive when compared to the U.S. rate.(16)

Workers Have the Most to Gain

Workers benefit from investments in two ways: through productivity growth and job creation, and through increased returns on their savings. Essentially, investments that are encouraged by a corporate tax reduction will translate into higher wages and more money for retirement. This principle is confirmed not only by Canada’s experience at the start of the new millennium, but also by international research, including ample evidence from Europe.(18)

Corporate tax cuts attract more investment in buildings and equipment. Investors from abroad are particularly sensitive to this tax, and shop around for low rates. Since these investments allow workers to be more productive by producing more goods and services more quickly, companies are able to hire even more workers, and also pay higher wages.

The Canadian experience between 2001 and 2012, when the federal corporate tax rate was lowered, corroborates these findings: Canadian wages did indeed increase faster than they had in the previous decade,(19) and faster than wages did in other industrialized countries.(20)

In fact, a review of the evolution of Canadian wages shows that while they grew little in most industrial sectors in the 1980s and 1990s, over the first decade of the 21st century “several industrial sectors experienced close to two-digit wage growth.”(21) This is partly attributable to the commodity boom that had a high impact in Canada. But other sectors such as construction, finance, and some service industries also experienced from 10% to 16% real hourly wage growth.(22)

Conversely, research on variations in corporate taxes across Canadian provinces between 1981 and 2014 found that for each additional dollar of tax revenue stemming from an increase in the provincial corporate income tax rate, aggregate wages were depressed between $1.52 and $3.85.(23)

There is a fairly strong consensus that the solution to the problem of Canadian competitiveness is to reduce the corporate income tax rate. When such a measure was adopted in Canada from 2001 to 2012, the experiment was a success and helped boost investment, despite two recessions and the considerable impact of falling commodity prices. Corporate income tax cuts also led to stable public revenues for the government, and to higher salaries. If our public decision-makers still had doubts about the need to act, the recent fiscal changes in the United States should have erased them.