The real or perceived shortage of labour is a theme that comes back again regularly in the news. This spring, the Quebec government published its labour strategy for 2018-2023, one of the objectives of which is simply to have enough workers. The document, however, had nothing to say about a major historical phenomenon, namely the “disappearance” of Quebec’s youth over the past three and a half decades.

This Viewpoint was prepared by Marcel Boyer, Distinguished Senior Fellow at the MEI. Mr. Boyer holds a PhD in economics from Carnegie Mellon University and is currently Professor Emeritus of economics at the University of Montreal.

The real or perceived shortage of labour is a theme that comes back again regularly in the news. This spring, the Quebec government published its labour strategy for 2018-2023, one of the objectives of which is simply to have enough workers.(1)

The document, however, had nothing to say about a major historical phenomenon, namely the “disappearance” of Quebec’s youth over the past three and a half decades. 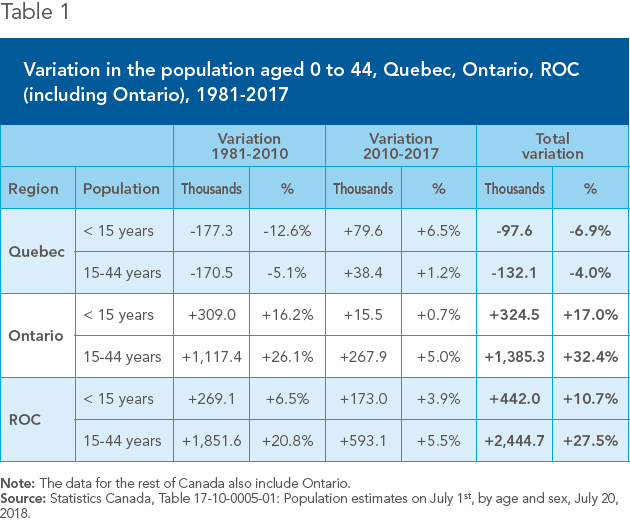 The upturn from 2010-2017 for those below the age of 15 may be a sign that the trend is in the process of reversing itself, but we will have to wait for a confirmation of this over the course of the next decade before concluding that negative growth is behind us. Quebec already experienced such an upturn, although less pronounced, from 1986 to 1993, with a 3.8% increase (+51,700) in the population below 15 years of age.(2) This age bracket subsequently decreased in population again, by 12.7% (-179,600) between 1993 and 2010.

Did young Quebecers leave in massive numbers during the years of negative growth? Quebec’s net international migration was clearly positive, although it was proportionally lower than Ontario’s.(3) As for its net interprovincial migration, it is systematically negative, which seems to indicate that Quebec’s capacity to attract is relatively weak.(4)

The sum of these fundamental movements leads to a harsh observation: Quebec lost a substantial number of its young, both those under 15 and those aged 15 to 44, over the past 35 years. We need to pay more attention to this phenomenon if we want to propose labour policies that produce the desired results.

Population growth depends on two main factors, namely natural growth (births-deaths) and migratory growth (immigration-emigration) from abroad and from other regions, and these in turn depend on complex tributary factors. Economic factors are of prime importance, especially for migratory growth: job creation; growth prospects; labour market flexibility; and more generally, the opportunity for personal and professional development, both for adults and for their children.

On several of these metrics, Quebec is lagging compared to the other provinces. Among other things, only 18.5% of full-time jobs created in Canada over the past 35 years were created in Quebec,(5) and the gap in terms of real GDP per capita with Ontario and with the ROC has grown, by 71.7% and 84.6% respectively.(6)

What can be done to make the labour market more dynamic and breathe new life into our economy? The problem is complex. The most promising avenue is without a doubt greater openness to competition and to the private sector within the context of truly wealth-creating policies. An economy that is too protected, for example by placing too much emphasis on grandfathering and seniority, necessarily becomes more sclerotic and less welcoming. Similarly, unionization that is too centralized and monopolistic will by its very nature hamper mobility and favour attitudes that are more resistant to change.

The population of youths and young workers has shrunk considerably in Quebec, and the province attracts few interprovincial migrants. The fact that cultural or linguistic factors can in part account for this situation must not be used as a pretext for inaction. On the contrary, Quebec’s particular challenges make it even more important to have policies that will make the province more attractive for families and workers. In this regard, our relative performance over the past 35 years certainly leaves something to be desired.