“Hospitals: Quebec brings order to emergency rooms — No patient will stay more than 48 hours,” ran a front-page headline in La Presse on March 11… 1980! Last year, the minister of health repeated this ultimatum. Waiting times at emergency rooms have been making news for a long time. Data released this past spring suggest that the situation has improved and that waiting times have declined, especially for patients on stretchers. What is actually going on?

Media release: No, emergency room waiting times are not going down, they’re going up

“Hospitals: Quebec brings order to emergency rooms — No patient will stay more than 48 hours,” ran a front-page headline in La Presse on March 11… 1980! Last year, the minister of health repeated this ultimatum.(1) Waiting times at emergency rooms have been making news for a long time. Data released this past spring suggest that the situation has improved and that waiting times have declined, especially for patients on stretchers.(2) What is actually going on?

Waiting Times Are Not Falling, They Are Rising

This apparent improvement is due primarily to the mismeasurement of waiting times. In the 2017-2018 fiscal year, the average stay at all Quebec emergency rooms was 7.3 hours, down half an hour from the previous year. For patients on stretchers, the most serious cases, the average wait went from 15.6 to 13.7 hours, an impressive decline of nearly two hours at first glance.(3)

The true picture, as measured by the median stay, is not quite so rosy. (This form of measurement is not as heavily influenced by extremes, and thus more closely represents what patients actually experience.) The median time went from 9.5 to 9.2 hours last year for patients on stretchers, a modest improvement of 18 minutes. For patients as a whole, the median time went from 4.4 to 4.5 hours. In other words, it went up slightly, contrary to what the average suggests (see Figure 1).(4)? 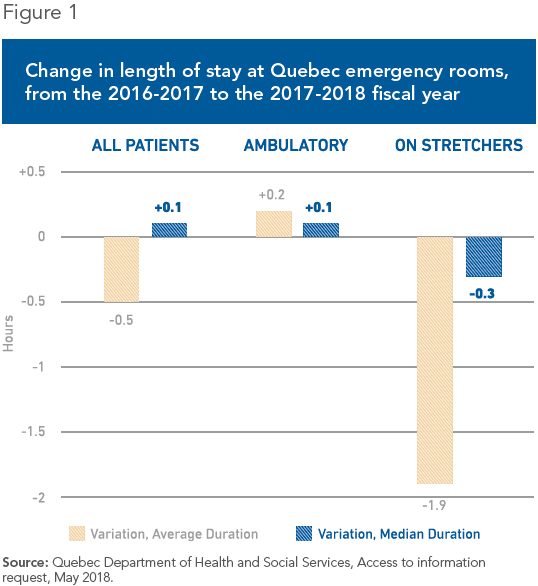 Even the 18-minute improvement for patients on stretchers may merely be apparent. A number of health care workers say that patients undergoing very long emergency room stays have been moved to overflow units, where they are no longer counted.(5) Even so, some 212,000 Quebec patients “officially” stayed more than 24 hours in an emergency room last year, and 30,000 stayed more than 48 hours.(6)

In short, despite promises and appearances, and despite the millions of dollars rained down on them by the government,(7) Quebec emergency rooms are stuck in a rut and continue to rank among the worst in the industrialized world.(8)

Entrepreneurs to the Rescue

How can a situation like this, which has lasted for decades, be resolved? The move toward activity-based funding, expected soon, will encourage healthy competition between hospitals and will reward those that attract more patients, instead of punishing them, as occurs now.(9) This is a good first step.

A second step, just as important, would be to call upon the private sector to manage a certain number of hospitals while maintaining public financing, as is done in most developed countries. In concrete terms, this could take the form of a pilot project turning over the management of some Quebec hospitals to private for-profit companies. Their innovative capacity, flexibility, and responsiveness could be put to work finding innovative solutions to the waiting list problem. For example, agreements would reward the fulfilment of performance targets while taking account of quality and access to care, as well as patient satisfaction.

From Germany to Quebec

Germany provides an interesting example. The precarious state of public finances led to a transformation of its hospital system in the early 1990s. The share held by private for-profit hospitals nearly doubled in twenty years, while public hospitals’ share fell by half. The quality of care in formerly public hospitals improved following their privatization, along with their efficiency, without affecting access to care.(10)

In Sweden as well, use of the private for-profit sector has produced spectacular effects. The country’s only private hospital with an emergency room, Saint Göran, in Stockholm, is also the hospital with the lowest waiting times: Fewer than 1% of patients stay there more than eight hours.(12)

Saint Göran has seen the number of patients treated in its emergency rooms rise substantially since its management was turned over to a private company. Meanwhile, its performance has continued to improve; it is regarded as one of the country’s top hospitals.(13) In Sweden, as in Quebec, the government funds health care directly.

The ability of entrepreneurs to deliver superior performance within a universal health care system should not surprise anyone in Quebec. The example of private long-term care facilities (CHSLDs) that are fully integrated in the public system shows that, here as well, the profit motive gives entrepreneurs an incentive to be more efficient while providing better care than in public institutions.(14)

All the promises and goodwill in the world will come to naught unless the basic parameters of our health care system change; it is, simply, a question of incentives. We have long known that the bureaucratic approach, by favouring processes over results, deters the creativity, experimentation, and rapid response required by innovation.(15) After more than 40 years of public management that has basically only created waiting lists, and then multiple reforms that have never succeeded in eliminating them, Quebec is ripe for more innovation and entrepreneurship in its hospitals.