For decades, Quebec has been known for its rotten public finances: recurrent deficits, lots of spending, and high taxes. But the provincial budgets tabled this spring by the governments of both Quebec and Ontario suggest that the latter province is now competing for the top prize in terms of financial recklessness.

This Viewpoint was prepared by Mark Milke, independent policy analyst, in collaboration with Jasmin Guénette, Vice President of Operations at the MEI. We would like to thank Adrienne DeLong Snow for her contribution to this publication.​ The MEI’s Taxation Series aims to shine a light on the fiscal policies of governments and to study their effect on economic growth and the standard of living of citizens.

For decades, Quebec has been known for its rotten public finances: recurrent deficits, lots of spending, and high taxes. But the provincial budgets tabled this spring by the governments of both Quebec and Ontario suggest that the latter province is now competing for the top prize in terms of financial recklessness.

Quebec’s government, on the other hand, has balanced its budget every year since 2015-2016, and has just announced it will pay down $10 billion of its debt over the next five years.(3) It has a net debt of $181.1 billion, which as a share of GDP (43.9%) remains higher than Ontario’s, but this ratio is expected to keep decreasing, despite a 4.7% increase in spending this year.(4) As can be seen in Figure 1, the two provinces’ net debt-to-GDP ratios have been converging steadily over the past decade. 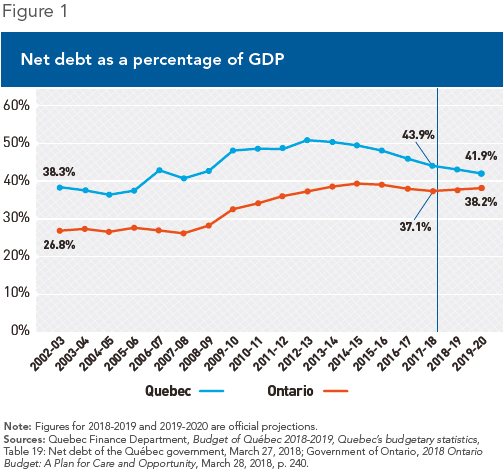 Given this changing debt picture, it is perhaps not surprising that in early April 2018, for the first time ever, the Quebec government’s cost of borrowing was below that of the Ontario government. For 10-year bonds, the rate for Quebec was 2.82%, five basis points below Ontario’s rate of 2.87%.(5) Indeed, in mid-April, a key ratings agency downgraded the province’s financial outlook from “stable” to “negative” due to the Ontario government’s plan to run multibillion-dollar deficits for the next six years.(6) Even if Quebec’s debt remains somewhat higher, it matters that the province is headed in the right direction, while Ontario’s debt grows.

Further evidence that Ontario is becoming more like Quebec may be found in their receipt of equalization payments from the federal government. Designed to address “fiscal disparities among provinces,”(9) equalization payments began to flow to Ontario in 2009-2010. These then grew, to over $3 billion for a couple of years, though they have fallen since then, down to just under $1 billion this year. Quebec, however, is now receiving close to $12 billion in equalization payments.(10)

The picture that emerges from these historical comparisons is clear: In terms of debt, in terms of spending, and in terms of taxation, Ontario has come to resemble Quebec a lot more in recent years. A small part of this convergence can be explained by Quebec’s somewhat improved performance of late, especially in terms of balancing its budget and reducing its net debt-to-GDP ratio.

But a much larger part is due to the deterioration of Ontario’s public finances over the past decade and a half. Its net debt has grown significantly, its spending has increased substantially, and its revenues have risen as well—all as a share of GDP. In short, the Ontario government now takes up much more space in the province’s economy.

Despite Quebec’s recent gains, both provinces are addicted to taxing, spending, and borrowing. The large debts in particular will of course have to be repaid with future taxes, which is a prospect that ought to alarm anyone concerned about the long-run prosperity and well-being of residents of the country’s two largest provinces.