Innovative drugs help people enjoy longer, healthier, more productive lives. They also allow our health care systems to save money. However, the reimbursement of new drugs by Canada’s public plans can face considerable delays due to a very burdensome regulatory process. Far from resolving this problem, a new reform will duplicate certain stages of this process and possibly lengthen it.

This Viewpoint was prepared by Mathieu Bédard, Economist at the MEI. The MEI’s Health Policy Series aims to examine the extent to which freedom of choice and private initiative lead to improvements in the quality and efficiency of health care services for all patients.

Innovative drugs help people enjoy longer, healthier, more productive lives. They also allow our health care systems to save money. The numbers are striking: If, after 1995, industrialized countries had had access to no new drugs to treat cardiovascular disease, related hospital stays would have cost 70% more ten years later.(1)

However, the reimbursement of new drugs by Canada’s public plans can face considerable delays due to a very burdensome regulatory process. Far from resolving this problem, a new reform will duplicate certain stages of this process and possibly lengthen it.

Health Canada examines all new drugs in order to ensure their safety, effectiveness, and quality. When the tests are conclusive, they are approved for sale.(2) These drugs are not automatically reimbursed by provincial drug insurance plans, however. Each new drug is also scrutinized by the Patented Medicine Prices Review Board (PMPRB), a federal agency that conducts an economic evaluation in order to set a maximum price, based on how innovative the drug is.(3)

Health technology assessment agencies then examine the advisability of reimbursing the drug, based on provincial governments’ ability to pay.(4) Once this evaluation has been carried out, the provinces together negotiate prices with the manufacturer through the pan-Canadian Pharmaceutical Alliance (pCPA). This single stage can take several months.(5) All of these organizations deal with drug prices, each in its own way, even though none of them buys or reimburses drugs.

Finally, provincial governments make use of these studies and of the result of negotiations to choose which drugs they will include on their respective lists of reimbursed drugs.

In 2015-2016, the process of economic assessment added an average of 450 days, or some 15 months, between the moment when drugs are approved by Health Canada and the moment when they are reimbursed by public insurers, and sometimes a lot more.(6) In the recent case of a new breast cancer drug, Health Canada’s approval in March 2016 was followed by registration on the list of drugs reimbursed by the Régie de l’assurance maladie du Québec (RAMQ) only in February 2018, 23 months later.(7) Figure 1 illustrates this arduous path.​ 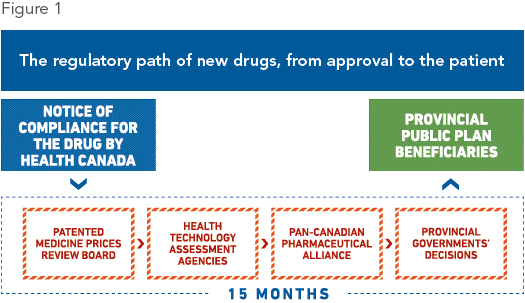 The recent reform of the PMPRB aims to expand its role. In addition to modifying the way it calculates maximum prices, the organization will now be able to carry out the same kind of analysis as the health technology assessment agencies and duplicate their work.(8) Increasing the regulatory burden is of questionable utility, especially given that drugs are very rarely sold at the maximum prices set by this agency.(9)

Moreover, this complexification of the assessment process for new drugs will in all likelihood affect their availability. Drug manufacturers obviously want to recover their research and regulatory compliance costs, thus ensuring the development of the next generations of drugs. Anything that makes this process more burdensome or increases related costs runs the risk of encouraging them to introduce new drugs first on other markets that are less restrictive and more profitable than Canada. This is indeed already the case in certain respects, as many new drugs are submitted to Health Canada long after having been submitted to the American and European authorities, an additional delay of six months.(10)

By adding these new regulatory barriers and changing the countries with which it compares itself, for the explicit purpose of reducing the prices of new drugs,(11) Ottawa seems set on proving at all costs that prices in Canada are excessive, without taking into account the savings that these drugs enable within the country’s health care systems.

This obstacle course that new drugs are required to run in Canada is not an unavoidable feature. In Germany, for example, drugs are reimbursed from the moment they are approved by the health authorities. Economic evaluations start only one year after they go on sale. The government then decides if the drug should continue to be reimbursed, and at what price.(12)

Both before and after the economic study is carried out, spending on drugs is limited by a budget allocated to each doctor based on his or her specialty and on historical spending levels. The prices of drugs are therefore essentially governed by the fact that doctors will prescribe less of a drug if its price is too high and it gobbles up too much of their budget.(13)

German hospitals, for their part, establish their own lists of drugs to prescribe, from the moment they are approved. They choose drugs based on budgets that are allocated to them for each patient.(14) The German system therefore shows how regulation can leave substantial room for market-based principles, which the Canadian systems tend to replace with bureaucracy.

Instead of increasing the regulatory burden and running the risk of penalizing patients, Health Canada should be looking to increase and accelerate access by taking inspiration from the best practices of other countries, namely relying on prices that result from supply and demand and authorizing the reimbursement of new drugs as soon as they’re approved. When one is sick, each passing month can seem like an eternity; such a change could give Canadians access to new drugs at least 15 months earlier.