Media release: Maple syrup: Quebec is hurting its producers and encouraging its competitors

This Viewpoint was prepared by Alexandre Moreau, Public Policy Analyst at the MEI. The MEI’s Regulation Series aims to examine the often unintended consequences for individuals and businesses of various laws and rules, in contrast with their stated goals.

Each new sugaring-off season brings its share of controversies, with stories about seizures of syrup from producers making headlines.(1) The rules that apply to Quebec maple syrup producers are indeed very restrictive, in addition to stimulating the growth of their competitors in neighbouring provinces and U.S. states.​

In the Grip of the Producers’ Federation

In Quebec, the marketing of maple syrup is highly controlled. The Fédération des producteurs acéricoles du Québec (FPAQ) determines marketing and production conditions, and it has the power to enforce producer compliance.(2)

The FPAQ is the exclusive sales agent(3) for bulk sales, which represent 85% of annual maple syrup production.(4) Producers must therefore go through the Federation or through a few authorized vendors to sell their product in containers of more than five litres, usually in barrels.(5)

The FPAQ also sets prices for bulk sales, and producers are paid in proportion to the annual production sold. The last time a harvest was completely sold was back in 2009, which means that subsequent deliveries have still not been paid in full.(6) Marketing fees representing around 5% of the price are deducted from sales.(7)

Moreover, since 2004, maple syrup producers must also abide by a quota system that allocates a certain level of production to each of them. It is possible to produce more, but these additional volumes will only be paid for when producers have harvests that are inferior to their quotas, and always based on a percentage of annual sales.(8) It could therefore take years for producers to be paid for such surplus production.

Maple syrup producers who opt to sell through an intermediary like a grocery store or a restaurant (around 5% of production)(9) must also respect their quotas, regardless of the demand for their products, even if this means turning clients away and accumulating surpluses.(10) Only direct sales to consumers are exempt from these constraints, as long as containers do not exceed five litres.

Since collective marketing covers over 90% of Quebec production, several producers look to sell their syrup without going through the FPAQ in order to be paid immediately and in full, but also to avoid fees, penalties, and production constraints. Those who are caught breaking the rules are subject to searches, seizures, and penalties of up to several hundreds of thousands of dollars.(11)

A System That Helps Quebec’s Competitors

Since the introduction of production quotas in 2004, the number of taps harvested in Quebec has increased by only 17%, while it has almost doubled (+89%) in the United States.(12) Furthermore, the yield per tap is generally higher outside Quebec.(13)

Quebec actually experienced the slowest growth in total maple syrup production in all of North America during this period. The two American states with the most production, Vermont and New York, experienced three or four times the growth that Quebec did (see Figure 1). 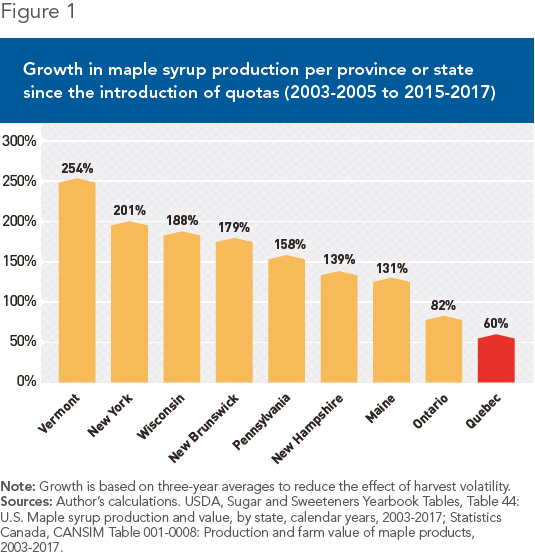 This strong growth enjoyed by our neighbours had a sizable impact on Quebec’s share of global production. This share, which had increased constantly since the mid-1970s, began to fall at precisely the moment when production quotas were put in place, in 2004. It has thus gone from a peak of 82% in 2003 down to 72% in 2017.(14)

Quebec is still in a position of strength when it comes to production, but this metric is not a good indicator of its actual market share. Indeed, the FPAQ is struggling with substantial surpluses that it has to store for years, for lack of buyers. In 2017, this accumulated inventory represented over 64% of Quebec’s annual production, a large part of which is made up of industrial syrup, for which there are few market opportunities.(15)

Other indicators suggest that this trend could continue. Quebec’s exports have more than doubled since the start of the 2000s, going from $176 million a year to $362 million. Over the same period, Quebec’s imports of maple syrup have exploded, reaching $20 million in 2016, almost all from the United States. American producers have thus doubled their exports thanks to the Quebec market since the quota system was put in place.(16)

It is difficult to estimate how much of the growth of foreign competition is due to the Federation’s control of marketing, but it is undeniable that Quebec maple syrup producers are the only ones to suffer its harmful effects. While the FPAQ comes down hard on producers that try to get free of its grip, and discourages others from producing more, those that are located outside the province take advantage of price stability and a free market to take market share away from Quebec producers.

Considering that the province already harvests close to 50% of its potential, compared to just 5% on the American side,(17) it is imperative to give Quebec producers back their freedom to produce and sell their maple syrup without having to submit to the FPAQ’s dictates. Otherwise, their share of the global market will likely continue to fall.