This Viewpoint was prepared by Alexandre Moreau and Kevin Brookes, Public Policy Analysts at the MEI. The MEI’s Taxation Series aims to shine a light on the fiscal policies of governments and to study their effect on economic growth and the standard of living of citizens.

Is it true that economic growth only benefits a small, privileged elite? This seems to be the belief of certain groups that regularly denounce a “crisis of inequality” in many countries, including Canada.(1) Yet this perspective, which considers wealth creation to be a zero-sum game in which the poorest are prisoners of their economic circumstances, is simply mistaken.

Time and again, economic research has debunked the popular belief that growth only benefits the rich. On the contrary, it increases everyone’s income, including those at the bottom of the ladder. One study, looking at 58 countries, found that 10% annual GDP growth is associated with a 10% increase in the incomes of the bottom 40%.(2)

Canada is no exception. The substantial growth that the country has experienced in recent decades has been accompanied by an impressive reduction in poverty. The portion of the population in a low income situation went from 13% in 1985 to a little over 9% in 2015, a drop of nearly a third in just 30 years.(3)

The biggest reduction was experienced by women, especially those aged 65 and over, with a 74% decrease. As a result of such reductions, the historical gap between men and women has almost entirely disappeared.

There are also substantial differences between the provinces. The case of Newfoundland and Labrador, which saw its low-income rate fall by nearly two thirds, is particularly striking. In the space of 30 years, it went from the cellar to second place among the provinces. Saskatchewan and Alberta, which saw their low-income rates cut in half, went from the middle of the pack to first and third place, respectively. Today, it is in British Columbia and Quebec that we find the highest proportion of low-income people, with 11.7% and 10.1% respectively, compared to 9.2% for all the provinces together.

The proportion of Canadians living through long periods of poverty has also fallen, by more than a third since 1992. It went from 10.7% to 6.4% in just a decade and a half.(4) Newfoundland and Labrador, Saskatchewan, and Alberta stand out once again with very clear improvements, while Quebec is in the middle of the pack when it comes to the persistence of low income (see Figure 1). 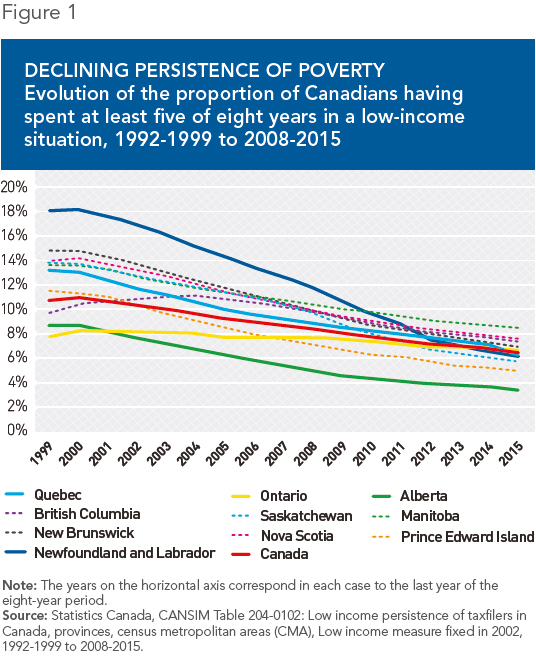 It is no coincidence that the circumstances of the poorest Canadians has greatly improved since the start of the 1990s, given that per capita GDP grew from $35,900 to $49,200.(5) The amplitude of GDP growth also explains the differences observed between the provinces.

For example, Newfoundland and Labrador is both the province where per capita GDP has grown the most (61%) and where the persistence of low income has fallen the most (‑66%). Conversely, it is Ontario that has experienced the least growth (22%) and by far the smallest decrease in long-term poverty (-14%).(6)

Overall, the experience of the Canadian provinces in recent decades shows that on average, a $10,000 increase in per capita GDP entails a 1.7-percentage-point decrease in the persistence of low income.(7) To get a sense of this effect, Alberta had a per capita GDP of $72,200 and a persistence of poverty rate of 3.3% in 2015, versus 41,000 and 6.2% for Quebec. In other words, the richer the province is, the shorter the time that people remain in poverty.(8)

Considering the substantial growth in wealth that Canada has experienced in recent decades, it is therefore not surprising to observe that it is one of the industrialized countries with the most social mobility.(9)

What about social programs? One cannot deny the positive effect of a certain level of public spending on social mobility at the bottom of the income distribution. However, increased spending on social programs is not always associated with falling poverty,(10) and public spending that is too high can lead to deficits or an increased tax burden, which undermines economic growth and, ultimately, poverty reduction.(11)

If the goal is to reduce poverty, we should focus our attention not on income inequality at a specific point in time, but rather on wealth-creating public policies like reducing the tax burden, liberalizing the labour market, fighting corruption, and the free movement of goods and services. Any policy that goes against these broad positions generates adverse effects by allowing small groups to enrich themselves at the expense of the large majority of consumers and taxpayers.(12)

It is these kinds of inequalities that should be the priority for groups seeking a more equitable distribution of wealth. Economic growth and the resulting increased opportunities benefit the entire population, including the poor. The best way to help the most vulnerable is to promote such growth.