Even though corporate subsidies have often been criticized for their undesirable economic effects and for discriminating in favour of certain sectors or companies, they continue to be very present in the Quebec economy. Quebec pays out twice as much in corporate subsidies as Ontario, proportional to the size of its economy. This policy does not make Quebecers richer.

This Viewpoint was prepared by Alexandre Moreau, Public Policy Analyst at the MEI. The MEI’s Taxation Series aims to shine a light on the fiscal policies of governments and to study their effect on economic growth and the standard of living of citizens.

Even though corporate subsidies have often been criticized for their undesirable economic effects and for discriminating in favour of certain sectors or companies, they continue to be very present in the Quebec economy.

Governments have at their disposal a multitude of measures and agencies to “support” economic development by targeting certain sectors, and sometimes specific companies:

The total corporate subsidies granted by the Quebec government, calculated based on the public accounts, thus come to a minimum of $3.1 billion in 2016-2017, while government receipts from taxing the income and the capital gains of private companies amounted to $7.5 billion.(5) This means that for each dollar the government collects from private companies, at least 41 cents are spent on various forms of subsidies. Given that the amounts of certain kinds of subsidies cannot be evaluated precisely, as explained above, the real figure is likely higher.

Statistics Canada counts subsidies to private businesses, which makes it possible to compare provinces. Using a methodology that differs slightly from the one we used for our Quebec estimate, the data show that corporate subsidies occupy a particularly significant place in the Quebec economy. For every $100 generated by its economy, the government spends 86 cents on various forms of subsidies. For provinces like Ontario, Alberta, and New Brunswick, the corresponding amounts are just 40, 39, and 29 cents respectively.(6) Thus, while Quebec produces just 19% of the provinces’ total GDP, it grants nearly 29% of the subsidies paid out by them (see Figure 1). 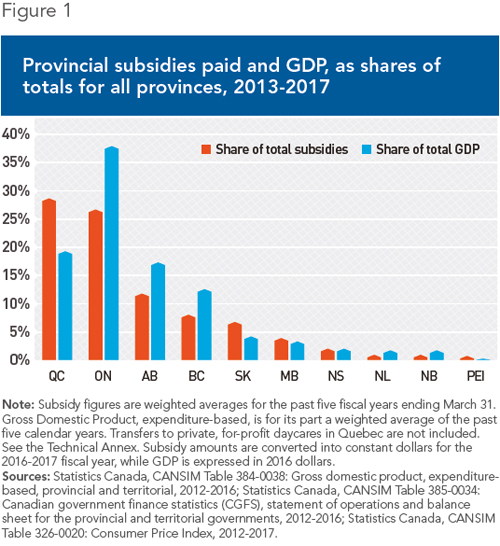 This disproportionate use of subsidies by the Quebec government does not result in a higher level of wealth per capita. In 2016, Quebec’s GDP per capita was $47,443, compared to $74,343 in Alberta and $58,585 for the provinces not including Quebec.(7)

Supporting the economy with subsidies is not a winning recipe, since such a high level of intervention entails adverse effects that undermine growth.(8) Increasing taxes to finance these subsidies creates distortions in the economy, reduces households’ purchasing power, and discourages productive activities. Recent studies estimate that each dollar collected in taxes costs society from $1.10 to $5.00. Moreover, these are costs that recur each year and that tend to be amplified over time.(9)

Also, the existence of subsidies gives rise to “rent-seeking.” Instead of trying to be more competitive and better satisfy consumers, entrepreneurs have an incentive to spend time and resources to try to collect their share of subsidies. For their part, politicians have an incentive to use subsidies to help certain sectors or companies to which voters are more attached, without regard for their economic viability, in order to increase their chances of being re-elected.(10)

By behaving in this way, the government essentially ends up confiscating money from more successful companies to spend it on projects that are relatively or completely unprofitable. Even if it manages to turn a profit from such activities, the government thereby politicizes entrepreneurship, which prevents an optimal allocation of resources.

The harmful effects related to the collection of taxes and their redistribution in the form of subsidies have been known for a long time. The Quebec economy would be in much better shape if the government substantially reduced corporate subsidies, and in return, reduced the corporate tax burden as well. Such a reform would not have a significant effect on public finances, but it would improve the competitiveness of all companies, reduce economic distortions, and promote wealth creation.

1. Quebec Finance Department, Public Accounts 2016-2017, Volume 2—Financial Information on the Consolidated Revenue Fund: General Fund and Special Funds, November 2017, pp. 11, 12, 42, and 43.
2. Quebec Finance Department, Public Accounts 2015-2016, Volume 1— Consolidated Financial Statements of the Gouvernement du Québec, November 2017, p. 100.
3. This amount includes the government’s $1.3-billion participation in specific funds entrusted to the Caisse de dépôt et placement du Québec. Ibid., pp. 92-93, 104-106.
4. Over 70% of the loan guarantees concern producers in the forestry, farming, and fishing sectors through the Financière agricole du Québec. The other guarantees were granted by the Economic Development Fund that is managed by Investissement Québec, including the program aiming to facilitate the funding of aircraft purchasers. Ibid., pp. 145-146.
5. Ibid., p. 166.
6. If Quebec subsidized its companies at the same level as the other provinces, the amount of subsidies paid out by the government would be on the order of only $1.7 billion. Annual estimate based on the weighted average of the five past fiscal years.
7. This gap is significant, despite the fall in oil prices experienced in 2014, which contributed to a $17,300 drop in Alberta’s GDP per capita. See the Technical Annex on the website of the MEI.
8. Nathalie Elgrably, “Are Business Subsidies Efficient?” Economic Note, MEI, June 2006.
9. Mathieu Bédard, “Cutting Public Spending Promotes Economic Growth,” Economic Note, MEI, October 8, 2015.
10. Gordon Tullock, “The Welfare Costs of Tariffs, Monopolies, and Theft,” Western Economic Journal, Vol. 5, No. 3, June 1967, pp. 224-232; Matthew Mitchell, “The Pathology of Privilege: The Economic Consequences of Government Favoritism,” Mercatus Center at George Mason University, July 2012, pp. 17-19.