Media release: The cost of medication: Prices that are too low could reduce access

This Viewpoint was prepared by Mathieu Bédard, Economist at the MEI, in collaboration with Patrick Déry, Public Policy Analyst at the MEI. The MEI’s Health Policy Series aims to examine the extent to which freedom of choice and private initiative lead to improvements in the quality and efficiency of health care services for all patients.

The Role of Pharmaceutical Innovation

Pharmaceutical innovation allows many people to live longer, healthier lives. When it comes to cancer, innovative drugs led to a reduction in the number of premature deaths of 8.4% in Canada from 2000 to 2011, whereas projections predicted an increase of 12.3% over the same period in the absence of such drugs.(1) Looking specifically at days of hospitalization related to cancers, one study concluded that these would have been almost twice as high in 2012 without the benefits of recent pharmaceutical innovation.(2)

Thanks in part to the introduction of new drugs, the elderly live longer. Some 73% of the increase in life expectancy at birth from 2000 to 2009 was thus due to the consumption of drugs launched after 1990. Workers also remain on the labour market longer, and many people enjoy a better quality of life.(3)

This innovation nonetheless depends on a fragile economic equilibrium, as the research needed to make these discoveries requires colossal investments and numerous years of work. To maintain this balance, pharmaceutical companies introduce innovative drugs first in markets where the prices of drugs are determined in such a way as to take into account, among other things, this research, as well as a certain return on investment.

The interests of patients are better served when prices are the result of the intersection between manufacturers’ supply and the demand of their clients, and allow for pharmaceutical research to be financed. Indeed, insurers have an interest in expanding their coverage in order to retain their clients and attract others (and in order to fulfill their mission, in the case of public insurers). From the other side, the need of drug manufacturers to sell their products gives them an incentive to limit the prices they charge.

However, when prices are set artificially low through the use of regulation, as Health Canada recently suggested doing, there is a risk that patients will end up paying the price. The federal agency wants, among other things, to modify the list of countries considered when establishing maximum prices for drugs, which would have the effect of lowering this ceiling.(4) In other words, comparing Canada to countries that have more limited access to innovative drugs could create the same problem here.

Currently, Canada is often one of the first countries where new drugs are introduced, since prices and reimbursements by public plans do take into account the required investments. Other places, where policies do not account for the research and development needed, obtain these same drugs much later. In certain cases, like in New Zealand, a country often cited as an example for its drug prices,(5) the public system’s access to treatments for diseases that are exploding like diabetes, cancer, and high cholesterol can be delayed by more than ten years compared to Canada.(6)

As shown in Figure 1, Canada was ranked 4th in 2015 among comparable countries in terms of the proportion of new drugs brought to market, behind the United States, Germany, and the United Kingdom, with 61% of new drugs marketed. In comparison, only 13% of new drugs had been launched in New Zealand. In Portugal, which recently adopted rules similar to those proposed by Health Canada for setting the prices of new drugs, only 49% of drugs were marketed.(7) When it comes to delays in launching new drugs, Canada is the second fastest after Japan, with an average time to launch of just 90 days after approval, versus over 400 days for New Zealand, and nearly 300 in Portugal.(8) 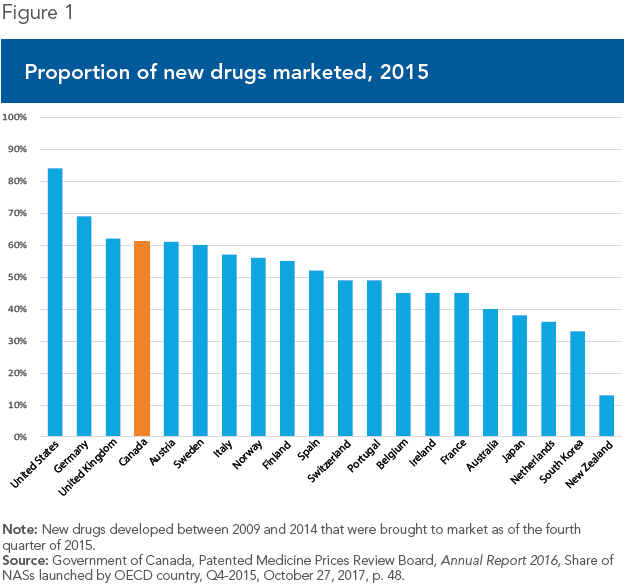 The Danger of Upsetting the Balance

The Canadian regulatory environment for new drugs is increasingly controlled by organizations that do not buy drugs but that have a substantial influence on prices and on levels of reimbursement.(9) A reform giving these organizations a greater role and detaching drug prices from market principles could significantly reduce Canadians’ access to drugs.

Canada could thus unintentionally wind up at the bottom of the pack in terms of access to new drugs. Since Canada is a country with a relatively small population, it could become more attractive for pharmaceutical companies to market their drugs first of all in places where the number of patients is higher.

The regulation of new drug prices must take into account the Canadian reality and the investments required to produce these drugs so that Canadians can benefit from them. Before intervening even more in this market, public decision-makers should appreciate the privileged access to innovative drugs that Canadians enjoy, as well as the fragility of the balance that underpins this access.

1. Frank R. Lichtenberg, “The Impact of Pharmaceutical Innovation on Premature Cancer Mortality in Canada, 2000-2011,” International Journal of Health Economics and Management, Vol. 15, No. 3, September 2015, p. 354.
2. Frank R. Lichtenberg, The Benefits of Pharmaceutical Innovation: Health, Longevity, and Savings, Research Paper, MEI, June 15, 2016, pp. 21-23.
3. Frank R. Lichtenberg, “Pharmaceutical Innovation and Longevity Growth in 30 Developing and High-Income Countries, 2000-2009,” Health Policy and Technology, Vol. 3, No. 1, March 2014, pp. 36-58; Pierre-Yves Crémieux et al., “Public and Private Pharmaceutical Spending as Determinants of Health Outcomes in Canada,” Health Economics, Vol. 14, No. 2, February 2005, pp. 107-116.
4. Notably, the new list of countries to consider in establishing maximum prices would exclude Switzerland and the United States, the latter being one of the countries that is most comparable to Canada due to the mixed (public and private) nature of its drug insurance system, even if prices there are higher. Health Canada wants to replace these two countries with seven new ones, five of which are below the OECD median in terms of access to new drugs. Health Canada, Protecting Canadians from Excessive Drug Prices: Consulting on Proposed Amendments to the Patented Medicines Regulations, May 16, 2017, p. 12; Government of Canada, Patented Medicine Prices Review Board, Annual Report 2016, Share of NASs launched by OECD country, Q4-2015, October 27, 2017, p. 48.
5. Timothy Sawa and Lisa Ellenwood, “Health minister vows to save Canadians ‘billions’ on drug prices,” CBC News, January 13, 2017.
6. This is the case, for example, for rosuvastatin, a high cholesterol drug available since February 2003 in Canada, and for telmisartan, launched in 1999 in Canada. The regulation of drug prices in New Zealand makes access to these and other treatments very difficult. Drugbank.ca; Cristine Della Barca, “Funding Medicines in New Zealand: Revision of the Medicines Waiting List,” Subscripts Limited, February 2017, p. 5.
7. Tania Rodrigues, “A New Cost-Containment Protocol in Portugal = Lower Hospital Drug Debts + More Stability?” Life Sciences Blog, IHS Markit, July 10, 2012; Europe Economics, External Reference Pricing, July 1st, 2013, p. 6.
8. In this case, it is a matter of marketing delays only for drugs that have been approved by the authorities of the respective countries. Brad Millson et al., Access to New Medicines in Public Drug Plans: Canada and Comparable Countries—2016 Annual Report, Innovative Medicines Canada, May 24, 2016, p. 21.
9. These include among others: the Patented Medicine Prices Review Board, the Canadian Agency for Drugs and Technologies in Health, the Common Drug Review, the Canadian Drug Expert Committee, and the pan-Canadian Oncology Drug Review.​