This Economic Note was prepared by Mathieu Bédard, Economist at the MEI. The MEI’s Taxation Series aims to shine a light on the fiscal policies of governments and to study their effect on economic growth and the standard of living of citizens.

The Harmful Effects of the Capital Gains Tax

A capital gain is an increase in the value of an investment, calculated as the difference between the sale price of the asset and its original purchase price. When an investor sells anything for more than the price that was paid for it, a capital gain is realized. In Canada, half of this gain is taxed as income (with some exceptions like one’s primary personal residence).

Just as sin taxes reduce the behaviour that is being targeted, the capital gains tax hinders capital formation, which is one of the basic foundations of all economic growth. In fact, most government policies that intend to boost economic growth are geared toward increasing the supply of capital. Less capital available to businesses, in turn, means that its cost will increase.(1) This will also affect job creation and wages throughout the economy, as less capital can then be matched with workers to make them more productive through technological and other improvements, which is a prerequisite for wage increases.

Taxing away capital is not the only detrimental effect of this tax. Capital gains taxation also encourages people to lock in their investments. Unlike most types of income, realizing capital gains is largely a matter of choice, and its timing can easily be modified by simply selling later. This makes capital gains much more sensitive than ordinary income to variations in the rate of taxation. When rates are high, individuals who own capital assets become more reluctant to sell them, requiring greater benefits to outweigh the tax burden they will incur. For them, the capital gains tax thus reduces the probability that a given stock will be sold.(2)

This hurts economic growth because it discourages the reallocation of capital to its most productive uses. Research pursued in the US has suggested that for every 1% drop in the tax rate, capital gains realizations—and hence the flow of capital—increase by 1%.(3)

The capital gains tax does not just reduce overall investments; it also affects which business ventures capitalists invest in. Venture capital tends to go to firms that offer unproven but potentially revolutionary technologies, services, or products. As they are unproven, they tend to be riskier but also, if successful, quite profitable. When they succeed, firms that have access to venture capital act as potent stimulants to economic growth, as well as productivity growth.(4) The capital gains tax, however, reduces the willingness of venture capitalists to finance these riskier business start-ups. As a result of the deterrent effect of the tax, they prefer less innovative forms of entrepreneurship.(5)

Finally, while inflation itself is often likened to a tax because of how it chips away at the value of money, the capital gains tax does not take it into account, thereby increasing the effect of the tax, especially for long-term projects.(6) An investment whose nominal value has increased 5%, but whose real value has only increased 3%, the rest being due to inflation, will still be taxed on the full, partly illusory 5%.

This is because the tax applies to the nominal return on capital, without adjusting for the fact that inflation may have substantially reduced the real value of this return. What this means is that long-term projects that have made no real capital gains, or worse, that have incurred losses in real terms despite a higher illusory nominal value, can be made to lose money (or lose even more money) through this tax alone.(7)

These effects of the capital gains tax represent one of the biggest fiscal burdens on economic performance in Canada. In a study of the macroeconomic effects of the different taxes that governments can use to raise revenues, the federal Department of Finance found that taxes that affect capital goods are the most detrimental to economic activity. As Figure 1 shows, each dollar of reduction of taxes on capital income would lead to economic gains of approximately $1.30. It is the tax whose elimination would bring the most gains. 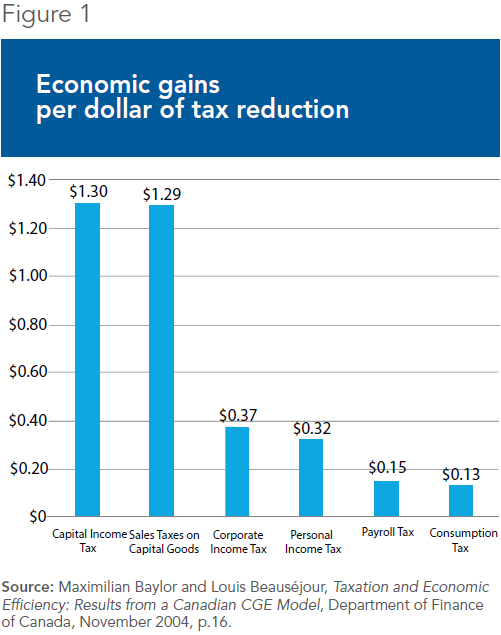 Moreover, the tax cannot be justified by the meagre revenues it generates for government. The reductions in federal government tax revenues would not be significant: approximately $4.3 billion, or just 1.5% of its total revenues.(8)

In addition to these considerations, the capital gains tax is rather regressive. While some investors can easily avoid paying this tax by delaying the realization of their capital gains, or invest in vehicles that do not generate capital gains, not everyone can do so easily.

Other groups, such as low- and middle-income taxpayers, the elderly, and less successful investors, typically have low financial flexibility, and have much less discretion over when to realize capital gains. They are therefore, in a sense, much more concerned by capital gains taxation than high-income earners. 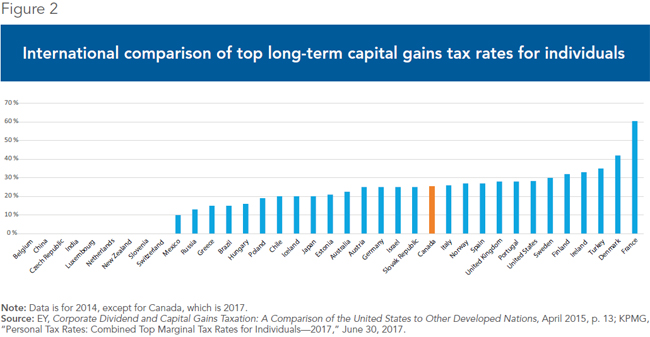 One study that looked at the case of Switzerland, where in addition to the central government, some districts (cantons) eliminated the capital gains tax, found that elimination increased the size of the economy by between 1% and 3%.(9) Another study, this one of Hong Kong, found that thanks to the absence of a capital gains tax, the territory’s savings rate is well above that of similar industrialized economies.(10)

In the case of New Zealand, the elimination of the capital gains tax is part of the sweeping reforms that started in the 1980s and shifted from taxing capital and savings to taxing consumption, which has less deleterious effects on economic growth.(11) These reforms were important in improving the economic situation of the country relative to its neighbours.(12) Other countries, like Israel, have moved to minimize the negative impact of capital gains taxation by taking the effects of inflation into account.(13)

Taxation of capital gains is particularly pernicious because this kind of income is derived from the efforts of investors and entrepreneurs to grow the economic pie, which is the basis of our prosperity. Moreover, investors can generally choose when to “cash in” their capital gains. In the case of very punitive rates, these gains can be postponed indefinitely, to the detriment of job creation and economic growth. The tax does not generate a lot of revenue for the government, yet it is a major burden for our economy.

Of course, the reduction or the abolition of capital gains taxation would involve complex technical tax issues. One of them is income shifting, which is the act of transferring other types of revenues, such as salary or dividends, into capital gains in order to benefit from its lower, or nonexistent, tax rate. But these technical and legal issues, however valid, can be solved through ongoing vigilance and targeted legislation when necessary, as has been the case in other countries that have no capital gains tax, such as those mentioned above.(14)

They have found ways to deal with these issues, and there is no reason to believe that Canada could not do so as well. These positive examples show us that eliminating our capital gains tax could help improve productivity growth in Canada, which would in turn improve the living standards of all Canadians.