Since the 1970s, farms in the dairy, poultry, and egg sectors have been subject to supply management, a system which combines production quotas, price controls, and import barriers to increase the prices of goods produced by these farms. The negative effects of this system for consumers have been studied in depth, and there is now a broad consensus regarding their existence and amplitude. The question of compensating farmers in order to abolish this regime remains an open one.

Since the 1970s, farms in the dairy, poultry, and egg sectors have been subject to supply management, a system which combines production quotas, price controls, and import barriers to increase the prices of goods produced by these farms.

The negative effects of this system for consumers have been studied in depth, and there is now a broad consensus regarding their existence and amplitude.(1) The question of compensating farmers in order to abolish this regime remains an open one.

Liberalizing sectors under supply management would mean eliminating price controls, tariffs on imported goods (nearly 300% on certain products), and production quotas, and would lead to gains of billions of dollars for consumers. But there would be a cost to liberalization, since farmers own their production quotas.

The market value of these assets, as determined by the marketing boards of each province, totalled $34.4 billion in 2015 (an average of $2.8 million per farm).(2) The issue for policy-makers is thus to determine the level of compensation required to end this policy in a way that is fair to farmers, taxpayers, and consumers alike.

Compensation Is Not a Barrier to Liberalization

The cost of compensating farmers is often presented by proponents of supply management as a barrier to liberalization. This is because the figures they put forward, which rely on the market value of the quotas, are high. This reflects the future stream of earnings from the higher prices imposed on consumers. Reimbursing market value would be extremely generous to farmers who bought their licenses at a fraction of that cost (or received them free of charge) and who have benefited from artificially high prices for many years.(3)

While still substantial, the cost of compensation offered at accounting value would thus be far lower than at market value. It would also avoid providing excessive compensation to long-time farmers, while being fair to newer ones who have acquired quotas at a higher cost.(5)

Even with a Tax, Consumers Benefit

The simplest option for proceeding with compensated liberalization would be to implement a temporary tax borne by consumers. The proceeds of such a tax would then be used to compensate farmers on an annual basis.(6) The tax would remain in effect until the amount raised equalled the amount to be paid in compensation, at which point it would disappear.

This policy course has the advantage of having been used successfully in Australia when that country eliminated its own supply management and price control system in the dairy sector. The compensation offered to producers was financed by a transitory tax equal to half of the expected retail price decline. However, the compensation was not based on the value of the quotas, but on an estimate of the loss of revenues following liberalization.(7) Compensation based on the accounting value of the quotas, as proposed here, is more generous for farmers.

As in the Australian example, Canadian consumers could benefit from reduced prices from the start of liberalization, since the amount of the transitory tax used to reimburse the value of the quotas would be far lower than the gains stemming from the abolition of supply management. Also, rules regarding the environment, health, and food quality would be preserved once the market is liberalized.

The reimbursement of the accounting value of the quotas over a period of ten years would represent a total payment of $13 billion, or $1.6 billion a year.(8) As for the net benefit for consumers, it would be from $3.9 billion to $5.1 billion, depending on how prices evolve. Once the reimbursement period is over, this net benefit could equal up to $6.7 billion per year. For example, Canadians could pay $2.31 for a two-litre carton of milk from the start of liberalization, and $2.08 after the reimbursement period, instead of the current price of $4.93 (see Figure 1).(9) 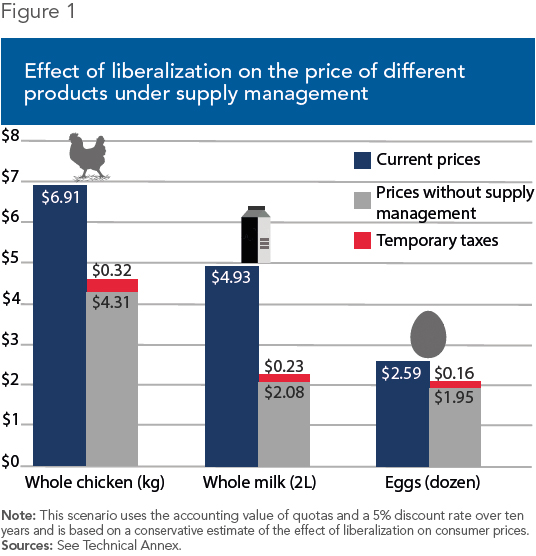 The costs of abolishing supply management are not negligible, but they are relatively modest when compared to the gains for consumers and to the wider economic benefits of liberalizing a sector whose growth would no longer be artificially restrained. Furthermore, in the context of imposing new tariffs on softwood lumber and renegotiating NAFTA, the abolition of supply management could be used as a bargaining chip and send the message that Canada is serious and coherent when it comes to free trade.(10) As such, compensation should not be seen as a barrier to reform, but rather as a realistic means of ending supply management.

1. Bruce L. Benson and M.D. Faminow, “Regulatory Transfers in Canadian/American Agriculture: The Case of Supply Management,” Cato Journal, Vol. 6, No. 1, 1986, pp. 271-294; Ryan Cardwell, Chad Lawley, and Di Xiang, “Milked and Feathered: The Regressive Welfare Effects of Canada’s Supply Management Regime,” Canadian Public Policy, Vol. 41, No. 1, March 2015, pp. 1-14; Giancarlo Moschini and Karl D. Meilke, “Tariffication with Supply Management: The Case of the US-Canada Chicken Trade,” Canadian Journal of Agricultural Economics, Vol. 39, No. 1, March 1991, pp. 55-68; Andrew Schmitz, “Supply Management in Canadian Agriculture: An Assessment of the Economic Effects,” Canadian Journal of Agricultural Economics, Vol. 31, No. 2, July 1983, pp. 135-152; Michele M. Veeman, “Social Costs of Supply-Restricting Marketing Board,” Canadian Journal of Agricultural Economics, Vol. 30, No. 1, March 1982, pp. 21-36; Colin A. Carter and Pierre Mérel, “Hidden Costs of Supply Management in a Small Market,” Canadian Journal of Economics, Vol. 49, No. 2, May 2016, pp. 555-588.
2. Statistics Canada, CANSIM Table 326-0020: Balance sheet of the agricultural sector, at December 31, and ratios, 2015; Statistics Canada, CANSIM Table 002-0072: Farm financial survey, financial structure by farm type, average per farm (gross farm revenue equal to or greater than $25,000), 2015.
3. For international comparisons of Canadian farm gate prices, see the Technical Annex to this publication on the website of the MEI.
4. Authors’ calculation based on data for Ontario dairy farms. We assume the same rate for all farms under supply management. Canadian Dairy Commission and Dairy Farmers of Ontario, “Ontario Dairy Farm: Accounting Project,” June 2016, p. 9.
5. Although we consider accounting value to be a fairer measure, the reform would nonetheless remain advantageous for consumers if farmers were compensated at market value. See the Technical Annex.
6. Compensation would be paid out at the start of each year.
7. The amount represented the equivalent of the rent for three years of revenues calculated individually for each farm. The government offered quarterly payments. Some farmers negotiated an agreement with their financial institution to guarantee a loan equivalent to the discounted value of the payments in order to restructure quickly. David Harris, “An Agriculture Case Study on Policy Reform and Adjustment: The Australian Dairy Industry,” Document prepared for the APEC Study Centre training course—Managing industry adjustment to trade reform, D.N. Harris & Associates, November 2004, pp. 8-9.
8. The amount of the compensation paid to farmers is expressed as a net present value. We estimate the accounting value of compensation at $13 billion based on the value of the quotas in 2015. At the end of the reimbursement period, farmers would therefore have received a total of $16 billion, which corresponds to a value of $13 billion today.
9. See the Technical Annex for detailed calculations.
10. Alexandre Moreau, “Trading Supply Management for Softwood Lumber?” Economic Note, MEI, March 23, 2017.​