The Bixi bike-sharing system will soon start its ninth season. Since its creation in the spring of 2009, Bixi has survived thanks to public funds. What does the bill add up to for Montreal taxpayers? If the goal was to promote the use of bicycles and active transportation, could the funds allocated to this service have been better spent?

Media release: Is Bixi worth $60 million?

Viewpoint – How Much Has Bixi Cost Montrealers?

The Bixi bike-sharing system will soon start its ninth season. Since its creation in the spring of 2009, Bixi has survived thanks to public funds. What does the bill add up to for Montreal taxpayers? If the goal was to promote the use of bicycles and active transportation, could the funds allocated to this service have been better spent?

From 2009 to the start of 2014, the non-profit Public Bike System Company (PBSC) was responsible for operating Bixi’s three sectors of activity: managing the bike system, selling the Bixi system and equipment internationally, and running the call centre service.(1)

The PBSC quickly found itself in financial difficulties. In June 2011, Montreal extended it a loan of $37 million. The City also guaranteed an $11-million line of credit for the company. In spite of this support, the PBSC had accumulated losses totalling over $22 million by the end of 2013. In January 2014, Montreal decided to place the organization under bankruptcy protection. The balance of the loan and the line of credit then totalled $38.2 million, for which the City was ultimately responsible.(2)​

Following the bankruptcy of the PBSC, Montreal inherited the local elements of Bixi and sold the international portion to a private entrepreneur for $4 million. After the reimbursement of the line of credit by the City, Montreal taxpayers’ total outlay for this first phase was therefore $34.2 million.(3)

Since the 2014 season, it is the non-profit Bixi Montreal that has run the bike-sharing system in the city. For the first season of Bixi Montreal, the City gave the new non-profit $4 million in “management revenues,” a start-up subsidy of $165,000, and a $460,000 loan for the purchase of fixed assets.(4)

According to its financial statements, the organization recorded a surplus of $867,187 in 2014, which among other things allowed it to purchase equipment and to return $165,336 to the City.(5) In reality, Bixi Montreal’s operations were still not profitable. Without the City’s support, the non-profit would have registered a deficit of $3.7 million.(6)

Spending did not stop there for Montrealers. In 2015, the City signed an agreement with Bixi Montreal and provided funding for the organization of $2.9 million a year through to 2019. The agreement allows the organization to keep all of its revenues, including the amount paid by the City, if these have not been spent by the end of the fiscal year.(7)

The non-profit’s 2015 financial statements show that it recorded a surplus of $281,996 during that fiscal year. Without the City’s contribution, this surplus would instead have been a deficit of around $3 million.(8) At the time of writing, its 2016 financial statements were not yet available, but there is no reason to believe that the financial picture will be markedly different. If Bixi Montreal generates surpluses, it is because taxpayers are subsidizing the organization to the tune of nearly $3 million a year, which the City has guaranteed until 2019.

To the approximately $34.2 million in public funds that were sunk into the PBSC starting in 2011 and the $4‑million subsidy paid out in 2014 must be added, at a minimum, the $14.6 million that the City will have paid Bixi Montreal for the period from 2015 to 2019. Montreal has also announced that it will spend $9.4 million over the next three years on Bixi equipment improvements.(9) When Bixi celebrates its 10th anniversary in 2019, the whole enterprise will therefore have cost Montrealers over $60 million, in addition to the fees paid by users each season.

Furthermore, if the goal of launching Bixi was to increase the frequent use of bicycles among Montrealers, this has not occurred. On the contrary, the number of “regular” cyclists, meaning those who ride at least once a week, fell by a little over 24,000 between 2010 and 2015, a drop of some 8%.(11) What’s more, Bixi’s impact on the environment is probably negligible, since it seems to essentially replace walking, other cycling, or public transit use.(12)

Today, we may well wonder if spending $60 million over ten years to maintain a public service basically limited to central neighbourhoods was the best solution for promoting cycling and active transportation. Could the cycling network have been further developed, or dedicated parking added, for example? There’s no telling what kinds of solutions would have emerged, as has happened in the case of car sharing, if not for public intervention pushing a one-size-fits-all model.

All indications are that what was presented as a service that would pay for itself, and even be profitable, has become in the end an additional and recurring burden on taxpayers. 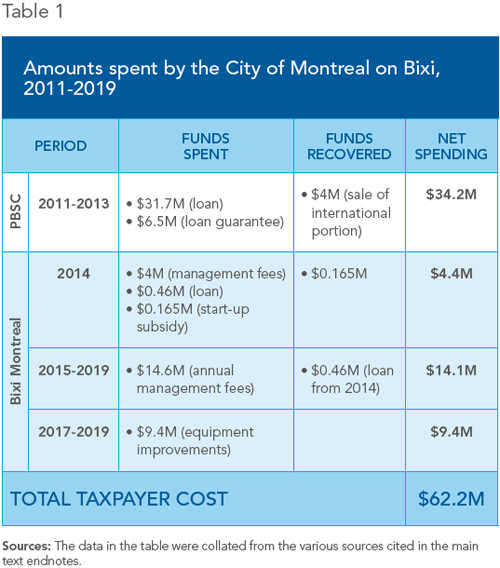 This Viewpoint was prepared by Jasmin Guénette, Vice President of the MEI, and Bradley Doucet, Editor and Public Policy Analyst at the MEI.