During the American election campaign, Donald Trump criticized the North American Free Trade Agreement on several occasions, going so far as to call it “a disaster,” and he clearly stated his intention to renegotiate it. Although the new president is wrong to target it as the source of the economic ills afflicting his country, it is true that NAFTA could be improved. Exempting Canadian softwood lumber from tariffs and opening up the agricultural sectors under supply management (dairy, eggs, and poultry) to American producers are two examples of measures that would be beneficial to consumers and producers on both sides of the border.

During the American election campaign, Donald Trump criticized the North American Free Trade Agreement on several occasions, going so far as to call it “a disaster,” and he clearly stated his intention to renegotiate it.(1) Although the new president is wrong to target it as the source of the economic ills afflicting his country, it is true that NAFTA could be improved. Exempting Canadian softwood lumber from tariffs and opening up the agricultural sectors under supply management (dairy, eggs, and poultry) to American producers are two examples of measures that would be beneficial to consumers and producers on both sides of the border.

Canada and the United States have been at the forefront of trade liberalization, notably by signing the GATT treaties, the Auto Pact, a free trade agreement, and finally, in 1994, NAFTA.(2)

These deals had a significant effect on trade. Adjusting for inflation, the value of Canadian exports to the United States have increased by more than 176% since 1981 to total $451 billion (US$341 billion) in 2016.(3) Imports followed a similar trend, which brings the total value of trade to nearly $882 billion (US$666 billion) (see Figure 1). This makes Canada the second largest trading partner of the United States, just behind China,(4) which caught up last year. For Canada, the American market represents 68% of its total trade value.(5) As for Canada’s share of total American trade, it stands at 13%.(6) 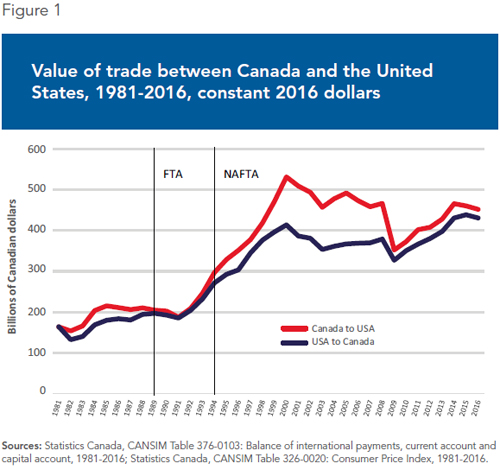 Yet trade between the two countries has stagnated since the turn of the millennium. They therefore have an interest in tackling their remaining trade barriers in order to breathe new life into their economic partnership.

Supply management will in all likelihood be at the heart of the next trade negotiations between Canada and the United States. A document from the American Government points out among other things the grievances of American producers with regard to this system, which governs the marketing of dairy, eggs, and poultry by establishing production quotas and import tariffs, and by fixing prices. Tariffs in particular are a source of friction, as they triple or quadruple the price of certain commodities, thereby closing the Canadian market to American producers for all practical purposes.(7)

Canadian farmers also lose under supply management, since it deprives them of access to billions of consumers around the world, which means that they have not been able to benefit from increased global food consumption over the past decade. When it comes to milk, Canada’s current production level is comparable to what it was in the 1960s.(8) The OECD furthermore expects the demand for dairy products in developing countries to grow over the coming years. Supply management will prevent Canadian producers from benefiting from this.(9)

Moreover, the funds required to purchase quotas limits the ability of farmers to invest in their facilities and equipment to increase the productivity of their farms. For example, a British Columbian dairy farmer has to pay $43,000 (US$32,470) just to acquire the right to produce and sell what corresponds to the production of approximately one cow, even before owning a single animal. In Quebec, where the price of quotas is fixed at $24,000 (US$18,123) per cow, these production permits represent 42% of the value of the average dairy farm.(10)

Supply management, by contributing to underinvestment in farms, thus traps producers in a vicious cycle. Paradoxically, the low productivity of certain farms is used to justify the maintenance of this system, whereas it is itself responsible for the situation. Yet larger farms would allow Canadian producers to be more productive and more competitive on local and global markets.(11)

The prices of products under supply management being determined by the costs of production, the low productivity of small farms also increases the retail price of these foods. Although direct subsidies for Canadian producers were abolished in the early 2000s, keeping prices artificially high represents an indirect subsidy for producers.

The abolition of Canadian dairy quotas should be conditional on the elimination of American subsidies. An American producer receives the equivalent of 7.46 cents (5.83 US cents) for each litre of milk produced, which represented 15% of total gross revenue in 2015. For Canadian producers, support in the form of higher prices represented 35.92 cents (28.08 US cents) per litre and 47% of gross revenue for the same year.(14)

The costs were not restricted to the Canadian side of the border. Canadian producers’ losses were substantial, totalling $2.03 billion (US$1.9 billion) over the period, but American consumers had to pay $6.36 billion (US$5.92 billion) more because of these tariffs. As for American producers, they saw their profits increase by $4.6 billion (US$4.31 billion) during this time.(16)

The American market is essential to the survival of thousands of forest communities in Canada. The provinces affected by the softwood lumber dispute actually supply around 30% of American demand,(17) which represents three quarters of Canada’s total exports in this sector. Over 24,300 direct and indirect jobs could thus be preserved by keeping the market exempt from tariffs.(18)

The American real estate market would also benefit from the maintenance of free access to Canadian softwood lumber. The imposition of a 25% tariff would cause the average price of a new home to rise by nearly $1,300 (US$975). This would have led to additional costs on the order of $1 billion (US$750 million) just for single-family homes built in the United States in 2016.(19)

Supply Management as a Bargaining Chip

American farmers’ access to Canadian sectors under supply management would open up for them a market with revenues for production and processing that total over $36 billion (US$27 billion), two thirds of which (67%) comes from the dairy sector.(20)

One study estimates that the complete, immediate abolition, with no financial compensation, of supply management would put 40% of Canadian dairy production at risk, which could cause the disappearance of from 4,500 to 5,000 farms. This is due to the much smaller size of Canadian farms, which entails relatively higher operating costs than in the United States.(21) Such a scenario is excessively pessimistic since a period of transition, including financial compensation for the value of quotas, would allow dairy producers to increase the size of their farms and thus reduce their operating costs.

Certain farmers could indeed decide to cease their activities after having received compensation. The prospect for growth, however, will be more favourable for those who remain. The liberalisation of the dairy industry would thus lead to an increase in Canadian production of from 75% to 150% over a period of 10 years. This change would also benefit the processing sector, by providing it with less expensive inputs and making Canadian products more competitive on the global market.

In all, liberalisation could create over 8,500 jobs in the dairy production and processing sectors.(22) The example of New Zealand speaks volumes: That country nearly tripled its production after having liberalised its dairy industry, becoming the biggest exporter of dairy products in the world.(23)

It is therefore entirely plausible that, following the opening up of the Canadian dairy market, American producers could meet a portion of Canadian demand without leading to a reduction in total Canadian production.

The abolition of supply management in Canada and of dairy sector subsidies in the United States makes sense not only from a strictly economic point of view, but also from the kind of give-and-take logic that often prevails in international negotiations. Canada should therefore seize the opportunity created by American pressure to open up its agricultural markets, and in return, demand full access to American markets for its softwood lumber.(24)

Trade barriers have never made more than a small minority of people richer, at the expense of the vast majority. Eliminating those that persist in the agricultural sectors under supply management and in the softwood lumber sector, and making sure not to erect new ones, would be good both for consumers and for producers. This is even clearer when taking into account the benefits on both sides of the border, which amount to billions of dollars and thousands of jobs. Ultimately, the renegotiation of NAFTA is an opportunity for Canada and the United States to broaden their economic partnership and contribute to its durability. That opportunity should be seized without hesitation. 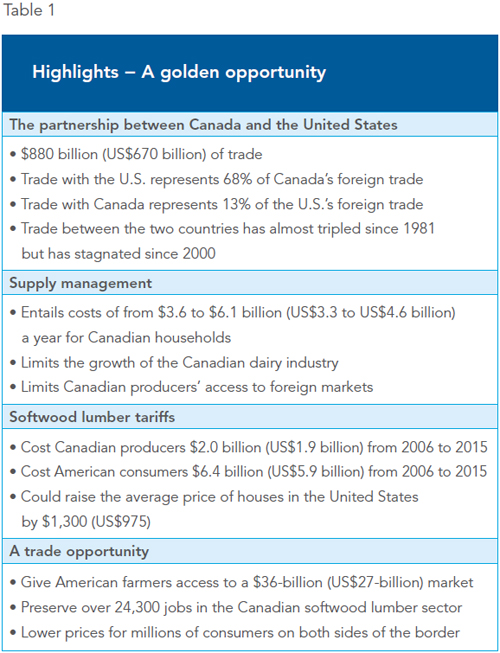 This Economic Note was prepared by Alexandre Moreau, Public Policy Analyst at the MEI. The MEI’s Regulation Series seeks to examine the often unintended consequences for individuals and businesses of various laws and rules, in contrast with their stated goals.