At the start of its mandate, the sitting Quebec government envisioned a profound reform of the tax system in Quebec that would stimulate economic growth by minimizing the impact of the tax burden, but without reducing government revenues. The main recommendations of the Godbout Report which resulted from this initiative were never implemented, however, despite a favourable reception on the part of Finance Minister Carlos Leitão.

At the start of its mandate, the sitting Quebec government envisioned a profound reform of the tax system in Quebec that would stimulate economic growth by minimizing the impact of the tax burden, but without reducing government revenues. The main recommendations of the Godbout Report which resulted from this initiative were never implemented, however, despite a favourable reception on the part of Finance Minister Carlos Leitão.

The proposed reform consisted of modifying the weights of different components of the tax system without altering the total amount of tax revenue collected by the government. By eliminating certain tax expenditures and increasing the rates of consumption taxes, mainly the Quebec sales tax but also specific taxes on tobacco, alcohol, fuel, and insurance, it would become possible to reduce personal and corporate income taxes.(1)

This kind of reform enjoys the support of many economists, who favour tax systems that do the least possible damage to economic activity.(2) Concretely, reducing personal income tax by one dollar increases the GDP by 72¢, whereas an equivalent reduction in the Quebec sales tax only increases GDP by 43¢.(3) Raising sales taxes in order to reduce income taxes thus stimulates the economy.

The logical explanation for this difference is that income tax penalizes work and investment, the motors of economic activity. By taxing consumption, it is income spent that is taxed, and taxpayers can avoid this to a certain extent by saving or by not purchasing taxed products, for instance by purchasing fresh foodstuffs rather than prepared meals.

However, the prospect of raising the sales tax elicited strong opposition from SMEs and retailers who fear they will no longer be able to compete if there is a Quebec sales tax hike.​

The Advantage of Shopping Elsewhere

The Quebec sales tax represents an average burden of $2,061 a year per Quebecer aged 15 and over.(4) When many purchases are made over a short period, the weight of sales taxes can be a determining factor in the choice of store, and it becomes even more worthwhile to hunt for bargains online or in the United States.

This is the case during the holiday season. Last year, a financial institution estimated that each Quebecer would spend an average of around $1,060 in gifts, food, entertainment, and travel.(5) Included in this amount, sales taxes (GST and QST) represent $138.(6) Indeed, sales taxes are higher in Quebec than in neighbouring provinces and states, with a combined rate of 14.975%. Only New Brunswick has somewhat higher sales taxes, at 15%.

Adjacent American states are much less greedy,(7) as shown in Figure 1. It must be pointed out that even though 45 American states have sales taxes, they do not exceed 10% in any of them. For purposes of illustration, sales taxes included in purchases in Plattsburgh, New York equivalent to C$1,060 would amount to C$78, while they would amount to C$57 in Burlington, Vermont. 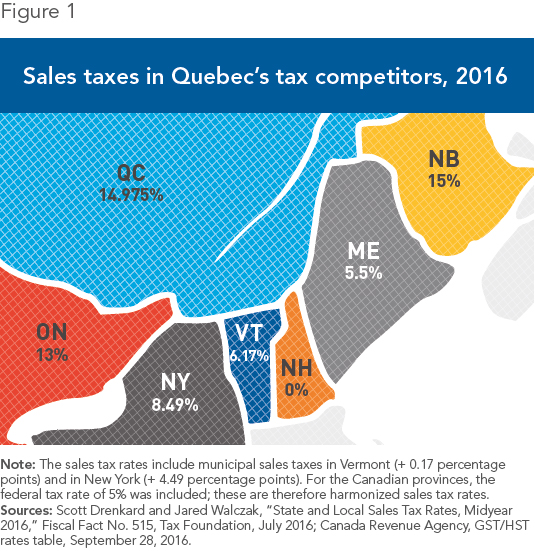 In addition to tax competition from our neighbours, retailing in Quebec is also faced with the growing phenomenon of online shopping, in which sales taxes are not systematically collected. In 2012, Revenue Quebec estimated that $165 million in Quebec sales taxes were not collected in the context of electronic commerce with suppliers located outside Canada, and another $300 million for purchases in other provinces.(8)

Indeed, online retailers do more business where sales taxes are the highest. Thus, a one-percentage-point increase in the sales tax leads to an increase of nearly 2% in online purchases.(9)

In theory, an increase in consumption taxes, including the Quebec sales tax, accompanied by a personal income tax reduction, would stimulate the economy. Tax competition, however, limits the capacity to raise sales taxes given their already high level in Quebec compared to its neighbours. Yet in the Godbout Report, increasing the rates of consumption taxes was an essential component that generated $2.7 billion of new tax revenue, allowing income taxes to then be reduced.(10)

The Godbout Report proposal was neutral in terms of tax revenue because any net reduction in revenues collected would have deepened the deficit that prevailed at the time when it was released. Now that Quebec’s public finances are back in balance and that the government is managing to record a modest surplus, there is room to go a little further. It would be possible to reduce the tax burden of individuals in order to stimulate economic growth, all while leaving aside the proposed hike in consumption taxes. The economy, consumers, and retailers in Quebec would all be better off.

This Viewpoint was prepared by Youri Chassin, Economist and Research Director at the Montreal Economic Institute. The MEI’s Taxation Series aims to shine a light on the fiscal policies of governments and to study their effect on economic growth and the standard of living of citizens.