In the debate over the collection, sharing, and use of personal information, there exists a widespread prejudice according to which companies are less respectful of citizens’ privacy than governments are. Yet companies universally operate by means of mutual consent, whereas governments very rarely ask those concerned for permission to access their information. With the Office of the Privacy Commissioner calling for the modernization of the laws governing the practices of the federal government and of companies, it is important to highlight the fundamental differences between the two, as well as the real source of danger.

Which Is the Greater Threat to Privacy, Business or Government?

In the debate over the collection, sharing, and use of personal information, there exists a widespread prejudice according to which companies are less respectful of citizens’ privacy than governments are. Yet companies universally operate by means of mutual consent, whereas governments very rarely ask those concerned for permission to access their information. With the Office of the Privacy Commissioner calling for the modernization of the laws governing the practices of the federal government and of companies,(1) it is important to highlight the fundamental differences between the two, as well as the real source of danger.

The Collection of Public Information

It is not easy to delineate the boundaries of privacy, since they vary enormously from person to person. For example, many people refuse to share their medical information with anyone other than their doctor and immediate family, while others will appear on television to discuss their illness and thereby help those who are in the same situation. Respect for privacy must therefore be seen not as an absolute and uniform level of secrecy, but rather as a level of control that individuals have over information that concerns them.(2)

Appropriate public policies help maintain this control by forcing companies and governments to be transparent and to respect their commitments regarding the use of personal information. Not all methods of collecting personal information have the same consequences for privacy, however.

When information is already public, the principle of consent very often does not apply. For example, private companies collect information about us without our prior approval from archives and other public sources like search engines.

This practice can have numerous beneficial and legitimate uses. This information allows the media to investigate and denounce certain reprehensible acts, for instance. A chance Internet search led a French woman to discover that her spouse was infected with AIDS and had been convicted of having knowingly infected several women.(3) Preventing the collection of such information, for example through the creation of a “right to be forgotten” as exists in Europe, would make it easier for ill-intentioned people to shirk their responsibilities and for criminals to reoffend.

Similarly, credit reporting agencies use public archives and search engines to complete the data that their clients already consent to divulge through their financial institutions. This allows them to preserve the good credit ratings of many people, all while protecting lenders and landlords.

As long as organizations that engage in these practices are transparent and allow those concerned to have access to the information compiled and allow them the chance to correct errors, this is compatible with respect for privacy.(4) The government, unlike companies, usually does not respect these conditions.

According to the Office of the Privacy Commissioner, “the federal appetite for our information has grown in direct proportion to the ease with which that information can be collected.”(5)

Indeed, just as new technologies were taking off, a privacy violation system was being set up, unbeknownst to the public, of a magnitude that no one could suspect, which was revealed in June 2013 by the whistleblower Edward Snowden. Telephone calls, emails, video conferences, social networks… practically all online communications are now intercepted by governments.(6)

Even though Edward Snowden’s revelations concern the American government in particular, Canadians are also targeted by this system. For one thing, the Internet and telecommunications know no borders, and Canadians also use these means of communication. For another, most governments around the world, including Canada, have similar surveillance programs or collaborate with the American program.(7) Even at the provincial level, the Sûreté du Québec recently announced the creation of such a program.(8)

Journalists have thus discovered that the Royal Canadian Mounted Police had access to the private, encrypted communications of most BlackBerry smartphones, and had decrypted approximately a million private messages.(9)

We do not know the scope of these surveillance programs. We do know that the number of calls and communications intercepted was multiplied by 26 in 2015, however, without the authorities revealing any reasons for this.(10) Several experts strongly suspect that the Canadian government uses instruments that capture the calls and messages of all mobile devices in an area, and not only those of people under surveillance.(11) These suspicions come up against the government’s lack of transparency.

Furthermore, governments force companies to spy for them. Many companies have been pressured by the authorities, in Canada and in the United States, to share private information and data. The responsibility for this privacy violation rests squarely on the government, since it leaves them no choice.(12)

These programs represent a threat to individual privacy, but this is not the only type of threat. As shown by the recent revelations concerning the police surveillance of journalists in Quebec, the threat also extends to the media.(13) Moreover, industrial espionage, practised by governments but also by hackers having gotten their hands on governments’ espionage tools, represents a real risk for companies.(14)

The Fundamental Differences between Governments and Companies

The approaches of companies and of government agencies when it comes to respect for privacy are totally different. In the American system, as in the Canadian and European systems, companies must inform the people they have dealings with of the ways in which their information will be used, and ask for their explicit consent.(15) Governments, on the contrary, use collection methods and other practices that ignore the principle of consent and are often secret.

Another important difference is that individuals’ interactions with companies can be avoided relatively easily. It is always possible not to use a smartphone, not to join social networks, or to use cash rather than a credit card in order to avoid sharing personal data, even if in doing so we forego numerous benefits and advantages associated with modernity.

Polls show that Canadians are not passive in managing their personal information. They inform themselves regarding the use of their data by companies, and when the answers are not to their liking, they refuse to do business with them (see Figure 1). 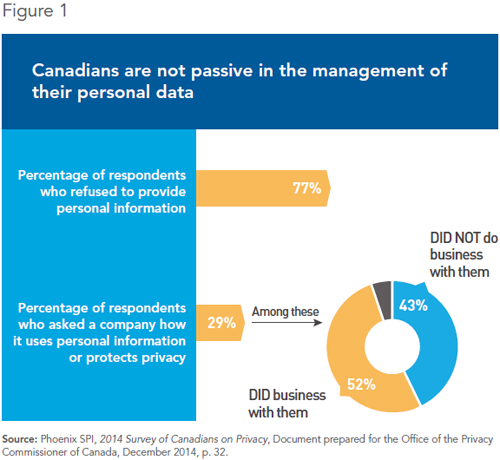 Governments do not give citizens the same level of control over their personal information as companies give them. This is first of all because in many cases, the sharing of information is mandatory, often for obvious reasons. This is the case for income tax returns, land registries, driver’s licences, criminal records, historical use of various social programs, etc. But it is also because they do not have the same safeguards against abuses that companies have.

The first safeguard stems from the fact that companies are in competition with one another, and as a result, they must give customers what they want. Changes due to consumer pressure are frequent. One need only think of the cancellation of Facebook Beacon and Google Buzz, or of the changes made to the way in which geolocation is stored on Apple devices.(16)

Moreover, with each new version of their operating systems, the two main types of smartphones have privacy settings that are more and more fine-grained and adaptable to individual users’ personal limits. The results of a poll commissioned by the Office of the Privacy Commissioner shows that Canadians are aware of the existence of these parameters and use them (see Table 1). 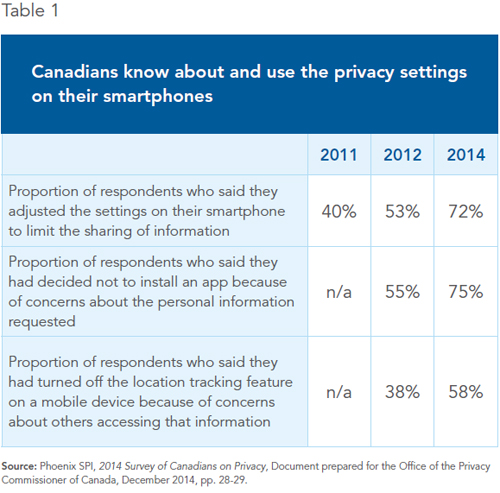 Another safeguard exists in the case of the private sector: the fact that the personal data collected by big Internet companies is too precious to be sold.(17) Indeed, the targeted advertising made possible by this information represents a value of up to US$1,200 per user, versus as little as half a cent per user if the information was sold. Preserving exclusive access to this information in order to target advertising is thus much more profitable than selling it.

In the case of governments, there are few safeguards. Even the revelations of Edward Snowden and the indignation of the international community have not led to any substantial changes in the data collection policy of the United States. Just recently again, it was revealed that the American government was asking Yahoo to intercept all incoming emails, a measure that President Obama and an NSA oversight board had sworn that the government was not using.(18)

The prevention of terrorism and criminality are obviously legitimate objectives. The government has armed itself with tough laws to fight terrorism, and as a result spies on private communications in collaboration with foreign governments to thwart attempted attacks. However, it must be recognized that these are exceptional circumstances. These powers must be properly regulated, limited to these objectives, and not trivialized.

This is unfortunately not what is happening. It is alarming to see that the limits imposed on these surveillance agencies by the Canadian government are unclear, especially when it comes to sharing databases between government agencies and with foreign governments.(19) A recent Federal Court ruling revealed that the Canadian Security Intelligence Service had acted illegally by conserving personal data for 10 years.(20) Ottawa imposes much stricter rules on the private sector than it imposes on itself regarding the collection, use, communication, and conserving of personal information, as recognized by the Office of the Privacy Commissioner and other observers.(21)

This Economic Note was prepared by Mathieu Bédard, Economist at the MEI. He holds a PhD in economics from Aix-Marseille University, and a master’s degree in economic analysis of institutions from Paul Cézanne University.