Choosing the right hospital can be a difficult decision for patients and their families. In 2005, in order to provide more transparency and facilitate evidence-based decisions, Germany began requiring that all hospitals publish structured quality reports every two years. These reports are meant to allow patients to compare the level of quality of each hospital. Doctors can also base their referrals on these reports. This kind of transparency leads to the continuous improvement of the quality of medical treatment.

Media release: Choosing a hospital the way you choose a hotel

Quality Reporting in German Hospitals: A Model for Quebec

Choosing the right hospital can be a difficult decision for patients and their families. In 2005, in order to provide more transparency and facilitate evidence-based decisions, Germany began requiring that all hospitals publish structured quality reports every two years.(1) These reports are meant to allow patients to compare the level of quality of each hospital. Doctors can also base their referrals on these reports. This kind of transparency leads to the continuous improvement of the quality of medical treatment.

The Quebec government is currently planning to fund its hospitals using an activity-based formula rather than historically defined global budgets. Such a measure should be paired with the introduction of the kind of mandatory quality reporting that exists in Germany, in order to harmonize hospital quality data and make it transparent and accessible to Quebec patients. Empowering patients to choose the right hospital for a given treatment, and having funds follow them, could represent a quantum leap for the quality of care in Quebec.

In the field of health care, where prices don’t influence the decisions of consumers, due to a third party payer, the most important competition parameter should be quality. The easier it is to gather data about facilities, their structural attributes, and quality of care, the more that patients and referrers are empowered to choose the right facility for treatment.

In Germany, quality reports have to be published on the Internet in an easily accessible data format. Among many different sets of data, these reports include information on which treatments a hospital conducted in a given year and how many of each, as well as the rate of complications and quality violations.

A report for small public hospitals, for example, includes quality indicators for almost 200 procedures, comparing results with national averages when possible.(2) This allows patients to compare different hospitals’ expertise in a given field of medical services and whether the hospital is above average, average, or below average in providing these services compared to other hospitals in its region and nationwide.

Usually, factors such as hospital reputation, proximity to one’s home, and family doctor recommendations have a major influence on where to seek treatment. Quality reports provide additional hard data on treatment quality and complication rates to allow patients to make more informed decisions. Public health insurers also use the quality data for recommendations to their patients.

Hospitals competing for patients can use quality reports to promote their services and quality level, with those hospitals offering higher quality being able to attract more patients. This leads to an upward spiral of quality in which everyone benefits, as long as the hospital-funding system allows for quality to be rewarded.

In other words, quality reports do not only serve patients and insurers as a transparency tool and hospitals as a marketing tool; they also encourage hospitals to improve quality. Furthermore, through the data they reveal, they encourage public health experts and scientists to develop better clinical guidelines, and medical societies and public health authorities can use the quality reports to analyze and address system-wide quality issues.

Opponents of quality reports in Germany criticize them for being too complicated to read, for not leading to concrete actions, and for being expensive, with a total annual price tag of approximately 14 million euros.(3)

Yet such criticisms do not stand up to scrutiny. For one thing, although the total cost of measuring and reporting health indicators seems high, it represents only around 1/7,000th of the total German hospital budget.(4)

In terms of concrete results, the hard data on the improvement of hospital quality speaks for itself. Just from 2013 to 2014, more than 15% of the 416 different quality indicators(5) showed significant improvements, meaning lower complication rates during and after hospital treatment, a speedier recovery, and a lower lethality rate.(6) A good example of such a case is the 27% reduction in hospital mortality after Transcatheter Aortic Heart Valve (TAVI) procedures within just one year.(7) Another can be found in the treatment of pneumonia, where 12 of 17 indicators saw significant improvements.(8)

The AQUA Quality Institute, the German institute that used to conduct the external hospital quality audits, found 21 alarming quality indicators in 2009.(9) Alarming indicators show a system-wide deficit of complying with clinical guidelines and a substandard result compared to international quality levels. If a hospital shows significant quality violations, a so-called “structured dialogue” between external experts and the hospital is initiated by a government quality auditing body.

While this structured dialogue met with resistance in the first years of mandatory quality reports, it is increasingly being accepted by clinicians and hospital administrators.(10) For 2014, AQUA found just six alarming quality indicators.(11) A decade after the first reports, many quality issues have been successfully tackled and overall care has significantly improved.

This new system also measures the quantity of each procedure, and hospitals that provide too few of a critical procedure don’t get reimbursed for them at all. This aims to keep “economies of skill” in the field of complex procedures. It encourages doctors and hospitals to specialize in fewer treatments and be able to conduct these at a higher level, resulting in fewer malpractice cases and increasing treatment quality.

Germany is currently adding an additional layer to its hospital compensation system. Besides merely reimbursing for a procedure, hospitals are also starting to receive compensation based on treatment quality. This creates additional incentives to improve quality outcomes, as it translates directly into revenue. Linking activity-based funding not just to the number and complexity of cases, but also to the quality provided to the patient means more money for hospitals that provide high quality care and less for those that deliver substandard quality.(12)

Eight in ten German hospital managers and medical doctors agree on the importance of comprehensive quality reports. They help them to better understand the level of quality in their hospital and compare themselves to other hospitals.

The information contained in these reports can also be useful in unveiling quality shortcomings. Problems in neonatal care, too many lymph node dissections, and over-prescription of costly knee implant surgeries would have been less obvious without quality reports.(13) More and more bonus clauses between German hospitals and their medical personnel include quality targets.(14)

As for the criticism that quality reports are too complicated to read, a representative poll of Germans found that 89% of patients would be interested in reading such reports and benchmarks for hospitals in their region prior to choosing a hospital.(15) And another survey found that 70% of patients who had already used quality reports had no problem understanding them.(16)

While the raw quality reports published by the hospitals may not be easy for some to understand, several health insurance funds and patient groups offer search functions on their webpages that help patients compare the quality of a given treatment in different hospitals (see Figure 1). These are easy to use, and are similar to hotel ranking portals like TripAdvisor. 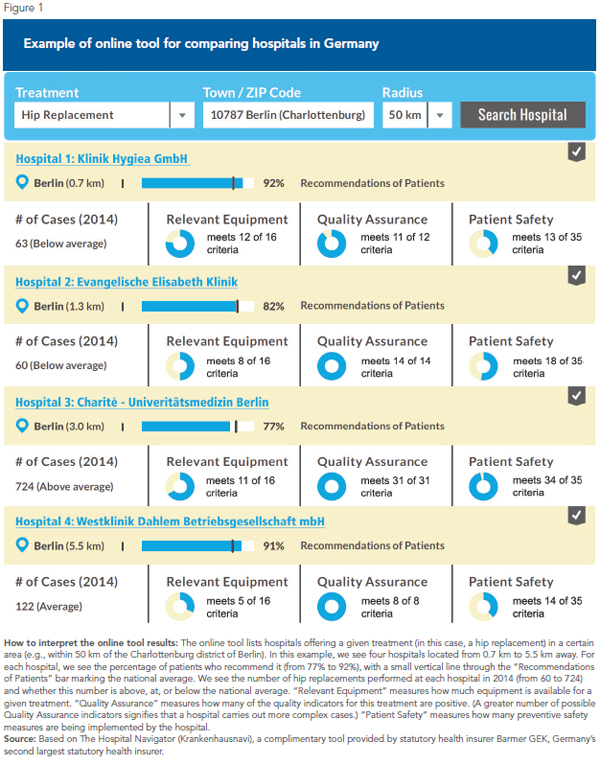 The public health insurer AOK, for instance, offers a quality comparison tool called Health Navi, which contains all the data from hospitals’ quality reports, but allows patients to quickly compare the different levels of quality for one single treatment based on the relevant indicators.

The non-profit Bertelsmann Foundation also has an online quality comparison portal for patients called White List. Other examples of third parties using the quality reports include several regional TV shows interpreting the quality data and providing their viewers with recommendations on where to seek treatment after a stroke or heart attack.(17)

Quebec Health Minister Gaétan Barrette recently proposed to introduce activity-based funding into the Quebec hospital system and thus move away from historically defined global budgets. This will allow hospitals treating more patients to receive more money.(18) By allowing patients to choose where to be treated, as is the case in Germany’s very successful universal and publicly funded health system, Quebec hospitals will strive to offer better services.

In order to have a more substantial impact, however, Quebec could replicate the process implemented in Germany, whereby an institute on hospital quality was charged with implementing quality reporting, establishing guidelines on how to measure quality, and prioritizing which indicators were the most important to measure. A joint committee consisting of payers, patients, and providers sets the framework for the quality reports and decides the scope of those reports.

In a further step, German hospitals were mandated to report and publish their quality reports every two years. Tying hospitals’ revenues to their achieved quality is an additional incentive to provide the highest possible quality.

Following the German example would be a viable step in the direction of empowering Quebec patients and fostering patient choice. The quality reports would serve as a hospital GPS-system for everyone, and allow laypersons to navigate through the complicated question of where to seek treatment. The quality of care throughout the system would gradually improve because of healthy incentives, resulting in an overall win for patients, hospitals, and doctors.

This Economic Note was prepared by Frederik Roeder, German health economist and Associate Researcher at the MEI, in collaboration with Youri Chassin, Economist and Research Director at the MEI. The MEI’s Health Care Series aims to examine the extent to which freedom of choice and private initiative lead to improvements in the quality and efficiency of health care services for all patients.