The most recent school board election results represented a golden opportunity to do away with this superfluous institution in order to allow the emergence of more autonomous schools. In December 2015, the Quebec government introduced a bill that went in this direction. However, the new Education Minister, Sébastien Proulx, decided to drop the structural modifications and focus instead on academic success. Yet abolishing school boards and entrusting schools with more autonomy would in fact promote the success of students. 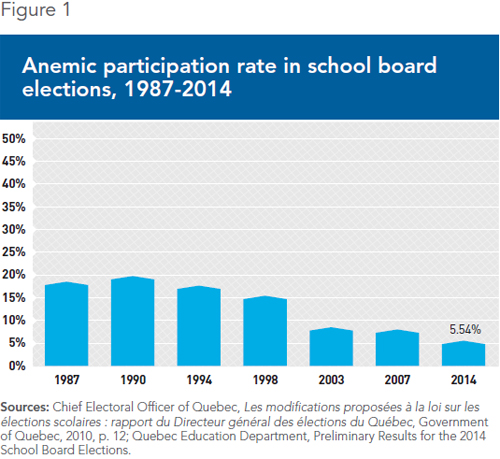 These most recent election results represented a golden opportunity to do away with this superfluous institution in order to allow the emergence of more autonomous schools. In December 2015, the Quebec government introduced a bill that went in this direction.(3) However, the new Education Minister, Sébastien Proulx, decided to drop the structural modifications and focus instead on academic success.(4) Yet abolishing school boards and entrusting schools with more autonomy would in fact promote the success of students.

School boards take care of many aspects of managing both teaching and non-teaching school staff (hiring, firing, evaluation, promotion, etc.), ensure the maintenance of facilities, provide pedagogical support to staff, and organize school transportation operations. However, these activities could all be undertaken by autonomous schools themselves. In fact, there are cases in Quebec of schools doing without the support provided by school boards: the 342 schools within the private school network.(5) These schools each individually manage their own staff, pedagogical services, and facilities. In many of them, boards of administrators composed of staff members and members of the community supervise the school principals and their teams.(6)

The experience of private schools suggests that school boards are superfluous. Defenders of school boards often retort that there are economies of scale in numerous expenditures related to management or to bulk expenses for necessary goods. Although these might exist, the evidence for economies of scale in education is very thin.(7) To be realized, economies of scale generally tend to require a one-size-fits-all approach to the production of services. Since many schools have unique clienteles, or specific orientations, they have unique needs that require flexibility in terms of which services are rendered and how, including decisions about hiring teachers and evaluating them.(8)

Economies of scale are therefore not a strong argument for school boards, because they are not automatic. Moreover, the realization of the relevant economies of scale does not require school boards. When it is more efficient for them to do so, independent schools can associate in order to make bulk acquisitions or hire specialized human resources without the need for a school board. Private schools do so already on a voluntary basis.

In the absence of school boards, schools would be free to use the teaching materials they consider most appropriate, and to manage the resources available to them in the manner best suited to meeting their pupils’ particular needs. Ideally, they would also face the possibility of parents transferring their children, and the corresponding public funding, to another school.(9) This combination of autonomy and accountability yields the best results.

There is an extensive literature documenting the benefits of such an approach in terms of student performance and continuation on to post-secondary education.(10) There are also important benefits in terms of soft skills that are harder to measure. Soft skills are social attributes learned in order to interact efficiently with other individuals. They are highly correlated with later life outcomes like a lower risk of unemployment and a higher income.(11)

An approach based on autonomy and accountability thus leads to long-run benefits that have an impact on other socio-economic outcomes.(12) In addition, when such an approach is pursued, it elicits greater involvement on the part of parents and local communities.(13) School boards may well prevent the full materialization of these benefits.

It is important to realize that school autonomy is an important step toward the goal of greater academic success. The results of the 2014 elections confirmed that school boards lack legitimacy, which should have provided a sufficient impetus for reform. Unfortunately, the government has missed this opportunity to improve school autonomy and accountability. There are, however, still two years before the next school elections.

This Viewpoint was prepared by Youri Chassin, Economist and Research Director at the Montreal Economic Institute, with the collaboration of Vincent Geloso, Associate Researcher at the MEI. The MEI’s Education Series aims to explore the extent to which greater institutional autonomy and freedom of choice for students and parents lead to improvements in the quality of educational services.