Gentrification is a process whereby middle-class families and young professionals establish themselves in working-class urban neighbourhoods. By no means unique to Montreal, this process has generated some resistance on the part of anti-gentrification activists, some of whom have resorted to violent means in the belief that they are being displaced. Yet gentrification is a widespread phenomenon that yields largely beneficial outcomes for everyone—including the poorest members of society—and whose negative effects can be mitigated by sound economic policy.

Media release: Gentrification is a positive phenomenon that also benefits the poor

Viewpoint – The Widespread Benefits of Gentrification

Gentrification is a process whereby middle-class families and young professionals establish themselves in working-class urban neighbourhoods. By no means unique to Montreal, this process has generated some resistance on the part of anti-gentrification activists, some of whom have resorted to violent means in the belief that they are being displaced. Yet gentrification is a widespread phenomenon that yields largely beneficial outcomes for everyone—including the poorest members of society—and whose negative effects can be mitigated by sound economic policy.

A Common and Beneficial Process

Generally unplanned and emerging at a grassroots level, gentrification is a process that waxes and wanes as the popularity of different neighbourhoods changes.(1) In Montreal, the Plateau Mont-Royal was initially a working-class neighbourhood that took a hit during the Great Depression, but it has since become a middle-class district.(2) Economic activity in Montreal has progressively shifted west, freeing up real estate and opening up gentrification possibilities in eastern parts of the city.(3)

The positive long-term benefits of gentrification are often associated with an increase in social diversity.(4) There is a growth of social capital, which can be defined as the connections between individuals that enhance knowledge, productivity, and skills.(5) This leads to more employment, more shops and restaurants, and a richer neighbourhood life.

In addition to reversing the economic decline of an area, increased economic activity can provide substantial income gains for poor individuals, who also benefit from a more diverse set of services and shopping choices. Indeed, before gentrification, areas that are in decline can be plagued by inadequate shopping venues, leading to higher prices for staples; with gentrification, affordable supermarkets often establish themselves (alongside higher-end boutiques and cafes), leading to lower prices for basic foodstuffs.(6)

Furthermore, the benefits are long-lasting, as exposure to better neighbourhoods increases the likelihood of upward socio-economic mobility, especially among children.(7) In other words, through the intermingling of people of varying social status and background, gentrification provides a social ladder which reduces inequalities. Gentrification is thus a powerful force for reducing poverty.

These benefits explain why many studies find that gentrification increases the likelihood that poor individuals remain in a given area.(8) The gains from higher incomes, improved housing, and better neighbourhood conditions encourage poorer households to stay where they are insofar as these offset the cost of higher rents.

Despite the large amount of attention paid to the issue of displacement in the wake of gentrification, little consideration has been given to the fact that without this process, continued disinvestment and housing abandonment in poor neighbourhoods lead to more displacement than gentrification does.(9) Indeed, for gentrification to occur, a neighbourhood must have first endured an exodus of many of its residents, which left the remaining residents with limited resources to improve their community.

Nonetheless, an increase in demand for housing will tend to raise prices, which may lead some poorer residents to leave. Opposing gentrification and its widespread benefits in the name of preventing any displacement is not a sound policy course, however; the best policy would make sure that those displaced have access to inexpensive housing alternatives.

The affordability of housing in an urban area depends to a large extent on restrictions on the supply of housing, which take the form of zoning laws. The aim of zoning is to limit how buildings are used, as well as their scale. If zoning regulations become too restrictive, they limit the supply of real estate. The consequences in such a case are well documented in the empirical literature: a dramatic decrease in housing affordability(10) (see Figure 1). 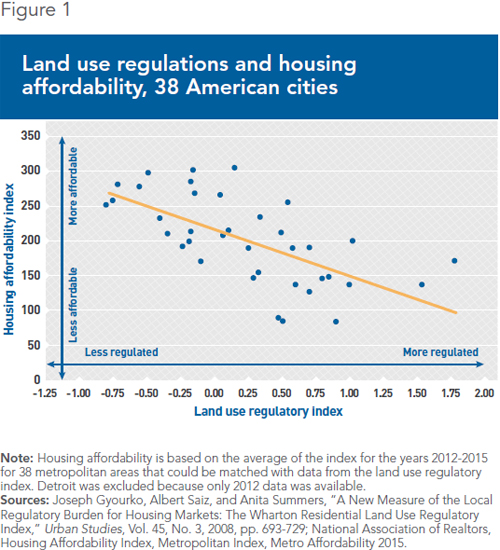 The burden of costs imposed by restrictive zoning is shouldered by the poorest members of society. On top of reducing the overall supply of housing, zoning may also alter the types of development projects undertaken by altering their relative costs. In general, this has discouraged the construction of rental units and favoured higher-end housing.

Instead of opposing gentrification, those who are concerned about the plight of the poor should condemn the vandalizing of private property, as well as the distortionary regulations that harm the most vulnerable. Easing land-use regulations would lower housing prices,(11) which would largely limit displacements and provide access to more affordable alternatives elsewhere in the city, thus allowing the full benefits of gentrification to materialize.

This Viewpoint was prepared by Vincent Geloso, Associate Researcher at the MEI, and Jasmin Guénette, Vice President of the MEI. The MEI’s Regulation Series seeks to examine the often unintended consequences for individuals and businesses of various laws and rules, in contrast with their stated goals.