Favourable conditions like lower fuel prices and the weakness of the loonie have benefited Canadian airports over the past two years. This trend could be short-lived, however, whereas systemic pressures are undermining the competitiveness of the Canadian airline sector in the longer term. In 2015, Canada was ranked 130th out of 138 countries in terms of ticket taxes and charges imposed on airports. Ultimately, these taxes and charges represent extra costs that are passed on to consumers and to air carriers.

Favourable conditions like lower fuel prices and the weakness of the loonie have benefited Canadian airports over the past two years.(1) This trend could be short-lived, however, whereas systemic pressures are undermining the competitiveness of the Canadian airline sector in the longer term. In 2015, Canada was ranked 130th out of 138 countries in terms of ticket taxes and charges imposed on airports.(2) Ultimately, these taxes and charges represent extra costs that are passed on to consumers and to air carriers.

Since 1992, the federal government has not been in charge of managing airports, which it now leases long-term to private, non-profit companies.(3) The authorities responsible for operating the largest airports of the National Airport System (NAS) receive no subsidies from the government.(4) However, as it still owns almost all of the 26 airports that make up the NAS,(5) the federal government requires authorities to pay rent that can represent up to 12% of their revenues. For the 2014-2015 fiscal year, Transport Canada thus collected $313 million from NAS airports.(6) All by itself, the Montreal Airport Authority (ADM) will have contributed $47.7 million (see Figure 1). 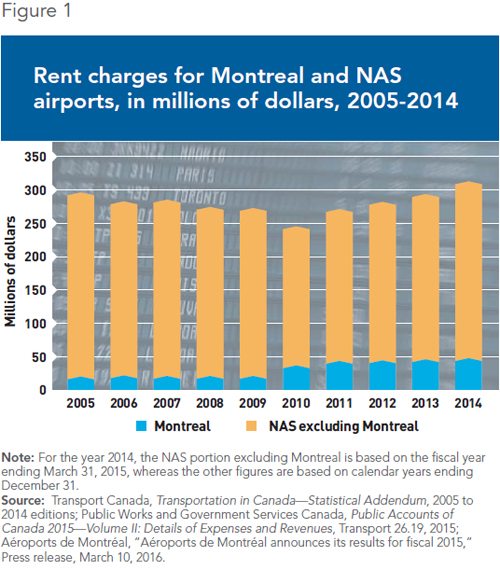 Since they do not have access to equity with which to finance their capital expenditures, airports must charge higher rates to carriers and consumers.(7) Airport charges alone account for 25% of the price difference between airfares in Canada and the United States, according to the Conference Board of Canada.(8) Higher prices in Canada have the effect of reducing demand for flights on Canadian soil, since certain travellers cross the border to save money, while others simply choose not to travel.

Replacing the current system of excessive rents based on a percentage of gross revenues with a tax on companies’ profits would encourage airports to invest more and to reduce the fees charged to carriers and consumers.

To illustrate the difference, imagine an investment decision involving an expected additional revenue of $1 million a year and an annual cost of $900,000. With a rate of 12% applied to gross revenues, the airport would find itself paying $120,000 of extra rent, representing a net loss of $20,000. But if it were privatized, the airport would pay a combined federal and provincial rate of approximately 35% on the $100,000 profit only, which would leave a net surplus of $65,000.(9)

The collection of excessively high rent is incompatible with the goal of increasing air traffic. Indeed, a Senate report recommended the gradual abolition of NAS airport rents and the complete transfer of airport ownership to the airport authorities that run them.(10) This recommendation did not echo widely among the political class, however, and the federal government still uses these rents to augment its revenues. Yet the short-term decrease in government revenues would be counterbalanced by the long-term economic gains made possible by the increased competitiveness of Canadian airports.

Montreal Airports at a Disadvantage

NAS airports are the property of the Crown, and as such, they do not have to pay property taxes directly. The municipal tax office must therefore register for the Payments in Lieu of Taxes (PILT) program in order to collect a rate that would apply to federal property if it were taxable and if it received the same level of services offered to other real estate owners.(11) As a result of the PILT program, the Montreal Airport Authority had to pay the City of Montreal the equivalent of $40.8 million in property taxes in 2014.(12)

While it is perfectly normal for airports to contribute to the tax bases of the municipalities where they are located, property taxes in Montreal are among the highest in Canada.(13) This unfavourable tax treatment, which is in addition to the rent that must be paid to the federal government, makes infrastructure investments and the development of new air routes more expensive, and applies upward pressure on the prices of plane tickets. To these charges and taxes must also be added the GST, the QST, and security charges, as well as a fuel surcharge.

If the goal of Montreal Mayor Denis Coderre is really to “improve the positioning of Montreal in order to remain competitive and attract new direct air links,”(14) his administration should make an extra effort to reduce the Montreal Airport Authority’s tax burden. As for the federal government, it should abolish the rental system or completely privatize the airports in the interests of consumers and of the Canadian airline industry as a whole.

This Viewpoint was prepared by Alexandre Moreau, Public Policy Analyst at the MEI. The MEI’s Taxation Series aims to shine a light on the fiscal policies of governments and to study their effect on economic growth and the standard of living of citizens.