Quebec’s Health Minister, Gaétan Barrette, recently announced that the government wanted to transform the funding method for medical facilities in the health network by adopting activity-based funding, a model which the MEI has analyzed a number of times in recent years(1) and which is the norm in most industrialized countries.(2) This is a step in the right direction when it comes to reducing waiting times in Quebec hospitals.

Currently, hospitals in Quebec—as in most of the rest of Canada—receive their funding in the form of global budgets based essentially on the amounts they spent in the past. These expenditures are increased every year to take into account the rising costs of labour, prescription drugs, technology, and medical supplies.

This funding method has left hospitals, faced with constantly growing demand, no choice but to limit admissions in order to stay within their budgets.(3) Moreover, lump-sum funding offers no incentives to hospital administrators to innovate and become more efficient. Under the current model, an administrator who devoted time and resources to putting innovative measures in place in order to improve care quality and reduce wait times in his or her hospital would not be rewarded for this initiative.(4)

Indeed, an innovation that reduced expenditures would lead to an equivalent decrease in the hospital’s next budget, while an innovation allowing wait times to be reduced and more patients to be treated would entail increased pressure on the fixed budget. In either case, since patients represent a source of additional expenses for a hospital instead of being a source of revenue, there is no benefit to be had in trying to be more efficient. 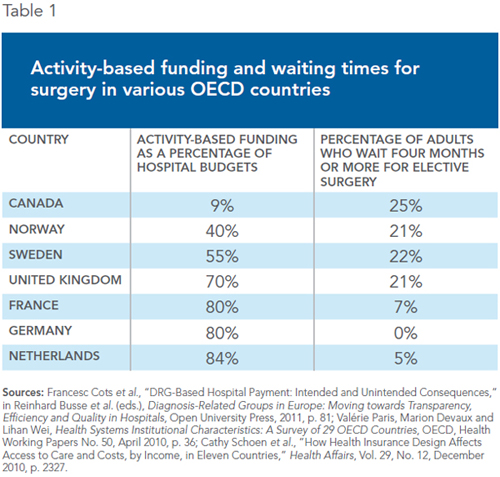 Hospitals receive a fixed payment for each medical procedure (for example, a hip replacement), usually equivalent to the average cost of providing this treatment within the hospital network. This payment is adjusted to take into account a series of factors specific to particular medical facilities: geographic location, severity of cases and complexity of diseases, characteristics of each patient, etc.

Generally speaking, in countries where the activity-based funding model is widely used, there is more competition between medical facilities and quicker access to care. This is true for example in Scandinavia and in England, where the health care systems most resemble the Canadian system.

In Norway, the portion of hospital budgets provided by activity-based funding was 40% in 2009. The hospital funding reform that was enacted not only improved the efficiency of Norwegian hospitals, but its implementation also coincided with a significant reduction in wait times. From 2002 to 2006, hospital admissions jumped 24% and the average wait time for elective surgeries fell 30%.(6)

Before 2003, hospitals in England were funded primarily with global budgets, and similarly to Canada’s current situation, the population seemed resigned to long wait times before receiving treatment. Since then, practically all hospital care has been reimbursed using an activity-based funding system, including ambulatory care and emergency services.7

Hospitals making better use of their resources allowed more patients to be treated without sacrificing care quality.(8) The reform also paved the way for other changes within the English health care system that have had beneficial effects. Patients now have the opportunity to choose the medical facilities where they want to receive treatment, and hospitals compete to attract them. This increased competition has played a key role in improving hospital management and the quality of care provided to patients.(9)

Concerns that activity-based funding might encourage hospitals, in particular those in the private sector, to select the least complex cases have proven to be largely unfounded.(10) Like most countries having adopted this type of funding, mechanisms were developed in England to identify atypical cases and to take into account the extra costs involved in treating such patients when determining payments to hospitals.(11)

The Reform and Its Benefits

The anachronistic funding of Quebec hospitals through global budgets is an obstacle to innovation and the search for efficiency. An activity-based funding model would encourage hospitals to increase their activities and reduce needless costs and lengths of stay, thus freeing up resources with which to treat more patients and improve access to care for those who find themselves on waiting lists.

However, such a reform should be accompanied by other, complementary measures, like greater administrative autonomy for hospitals and the removal of bureaucratic obstacles that prevent patients from having access to the information they need in order to decide in which hospital they want to be treated. This would allow some healthy competition between hospitals and more choice for patients, with the ensuing positive results that can be observed in the experiences of other countries.(12)

This Viewpoint was prepared by Youri Chassin, Economist and Research Director at the Montreal Economic Institute. The MEI’s Health Care Series aims to examine the extent to which freedom of choice and private initiative lead to improvements in the quality and efficiency of health care services for all patients.