A few weeks ago, the Davos World Economic Forum underlined the growing role of the Internet in the economy by taking as the theme for its discussions the “fourth industrial revolution,” namely the revolution made possible among other things by innovations related to the Internet. According to the World Bank, the Internet promotes economic development since it provides access to opportunities that were previously out of reach for the most disadvantaged people around the world. It seems destined, in all likelihood, to be the primary driver of economic growth in the coming years, even though we still do not appreciate the full extent of its impact on the economy.

Media release: Governments must not hinder the 4th industrial revolution

The Underestimated Economic Benefits of the Internet

A few weeks ago, the Davos World Economic Forum underlined the growing role of the Internet in the economy by taking as the theme for its discussions the “fourth industrial revolution,” namely the revolution made possible among other things by innovations related to the Internet. “The speed of current breakthroughs has no historical precedent,” declared the Executive Chairman of the Forum, Klaus Schwab.(1) According to the World Bank, the Internet promotes economic development since it provides access to opportunities that were previously out of reach for the most disadvantaged people around the world.(2) It seems destined, in all likelihood, to be the primary driver of economic growth in the coming years,(3) even though we still do not appreciate the full extent of its impact on the economy.

What the Internet Contributes to Economic Growth

The World Economic Forum’s Networked Readiness Index 2015, which ranks countries according to the tendency of their economies to make use of telecommunications and information technology, places Canada 11th in terms of general readiness, 6th in terms of infrastructure, 4th for its business and innovation environment, and 11th for its political and regulatory environment.(4)

Our economy’s decent level of networked readiness is reflected in the prominent place occupied by the communications and information technology sector. It represented $70.2 billion in 2014, or about 4.3% of the gross domestic product,(5) and 10% of annual economic growth between 2004 and 2009.

This latter proportion is lower than in other industrialized countries, where the information technology sector accounts for an average of 21% of economic growth.(6) This difference is primarily the result of certain general characteristics of our economy, including the weight of the natural resources sector, the difficult access to capital markets, and the attractiveness of the United States, which remains one of the most dynamic countries in terms of new technologies and which draws in a certain number of Canadian entrepreneurs and investors (see Table 1). 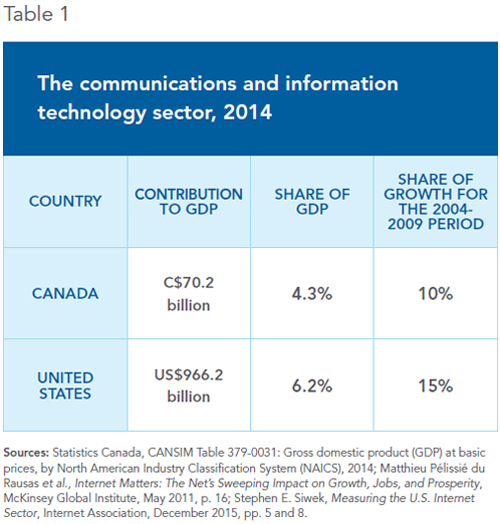 Unsurprisingly, this economic activity creates jobs. The World Economic Forum calculated that a 10% increase in a country’s digitization—that is, in the adoption of communications and information technologies by consumers, companies, and governments—entails 0.75% of additional growth in terms of GDP per capita and a 1.02% drop in unemployment.(7)

A Level Playing Field for SMEs

These data capture only a fraction of the productivity gains related to the Internet. In many regards, all businesses today are “Internet companies.” Internet access has particularly benefited SMEs, often in ways that no one would have imagined were possible just a few years earlier.

For example, the Internet gives small and medium-sized enterprises access to the global marketplace. Hal Varian, Google’s chief economist, invented the term “micromultinational” to describe how the Internet puts small companies on equal footing with large corporations.(8) Even when they are very small, it is easier and easier for companies to compete in the global marketplace without having a physical presence in other countries.

The complex mosaic of services and platforms that is the Internet also offers solutions in terms of office automation, shipping, and logistical support that were not so long ago restricted to large corporations, and does so at a fraction of the cost of traditional methods. This is the case, for example, of cloud computing, which is to say those online computing tools that do not need to be downloaded and that are replacing professional software.

These cutting-edge goods and services can easily be purchased online, which allows small companies to focus on their strengths instead of building this infrastructure from scratch. A case in point is the microenterprise Cox International, created by British Columbian Bernd Eisele, which sells model airplane parts and employs three people. It gets 95% of its sales revenue from abroad. This is the same percentage of foreign sales registered by Off Runway Gown, Farishta Zarify’s microenterprise. Operating out of London, Ontario, this Internet retailer sells new and pre-owned designer gowns.(9)

These are two small businesses which have nothing to do with the innovative high-tech companies that we normally associate with the Internet, and which would have had no chance of succeeding if they had had to build their own networks and their own supply and distribution tools. 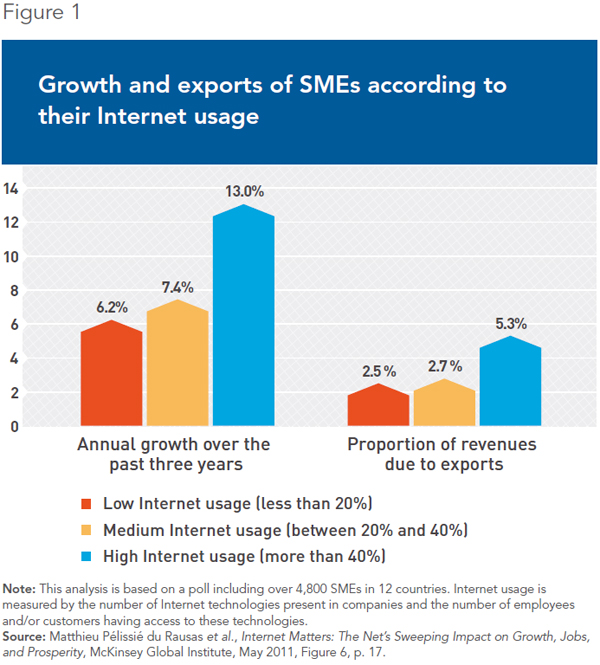 The Internet has also allowed companies to develop subsidiaries more easily and to work with collaborators all around the world. By reducing the costs of communication, travel, and moving, the Internet has facilitated this “trade in tasks” that increases the productivity of both the delegating company and the worker who has access to a new labour market.(12) Innovative Canadian companies, for which human resources are a constant challenge, can therefore recruit elsewhere than in their immediate environment.

The place that the Internet occupies in our lives is actually greater than the official figures suggest, since certain consumer and business activities are even harder to quantify. Indeed, a country’s GDP, calculated based on national accounts, cannot take into account many benefits related to free content, whether it’s product commentaries, specialized blogs, social networks, or crowdsourcing (large-scale voluntary participation projects like Wikipedia). For example, in 2010, products researched online but purchased in brick-and-mortar stores represented 11.3% of retail trade.(13)

This global “cognitive surplus” has allowed markets to become increasingly transparent. Merchants can no longer take advantage of the ignorance of consumers with regard to the quality and the availability of products in order to pad their profit margins. The Internet therefore helps augment the purchasing power of consumers and bring them greater satisfaction.

Other benefits of this new free information are not necessarily economic in nature. For example, before the advent of the Internet, when a loved one became gravely ill, some people chose to go to the library to carry out their own research and make enlightened choices about treatment options. Now, it is possible to do the same kind of research without leaving the patient’s bedside. Florida mother Judy Mollica lived these two experiences when her daughter got cancer in 1992, and then had a relapse in 2005. According to her, the ability to search online encyclopedias, among other things, not only saved time, but also gave her a greater sense of control over the situation.(14)

In 2011, Google’s chief economist estimated the gains related to free content and services for an average Internet user at US$500 a year.(16) Between 2002 and 2011, the amount of time Americans spent using the Internet grew from 3 to 5.8 hours per week.(17) This evolution reflects the increasing value that the Internet has for consumers.

The value that American consumers place on free content and services found on the Internet was between $2,500 and $3,800 in 2006.(18) According to the same kind of study carried out in Europe, this value almost doubled from 2010 to 2013. This growth is mainly due to consumers’ rapidly increasing use of wireless Internet access, whether through cellular networks or Wi-Fi.(19)

Let’s Not Hinder the Development of the Internet

As we have seen, the Internet ecosystem affects the entire economy, for businesses and consumers alike, in various ways that were completely unpredictable just a few years ago. This difficulty of anticipating the next technological advances and the parameters of this fourth industrial revolution must be taken into account when seeking to regulate a new area of economic activity that is developing thanks to the network. Seemingly benign regulatory constraints can have significant adverse effects on the Internet ecosystem and on the ability of companies to innovate. On the other hand, more flexible regulations can give a head start to the development of a new area of activity.

For example, it is because the relevant Canadian regulations are more flexible than those of the United States that Amazon’s delivery drone tests are being carried out here and not there.(20) This sector is developing more quickly in Canada, along with the related positive effects that this implies on investment and jobs.

Furthermore, most of the applications, platforms, and technologies that have been developed on the Internet arose in what can be called an environment of “soft regulation.” This can be attributed, to a certain extent, to the difficulty that governments have had in keeping up with a rapidly evolving market. Uber, Airbnb, and Bitcoin, present just about everywhere around the world before their legal status could be officially established by the authorities, are some notable examples.

For our companies to be able to take advantage of all of these innovations, rules that hinder their emergence must be avoided. The Internet requires constant investment for its benefits in terms of economic activity and job creation to persist. Attempts to influence the development of the Internet could very well act as a drag by breaking the virtuous circle of investment. When it comes to the Internet, as with the rest of the economy, the best regulation is that which is enacted sparingly.

This Economic Note was prepared by Mathieu Bédard, Economist at the MEI. He holds a PhD in economics from Aix-Marseille University, and a master’s degree in economic analysis of institutions from Paul Cézanne University. The MEI’s Regulation Series seeks to examine the often unintended consequences for individuals and businesses of various laws and rules, in contrast with their stated goals.